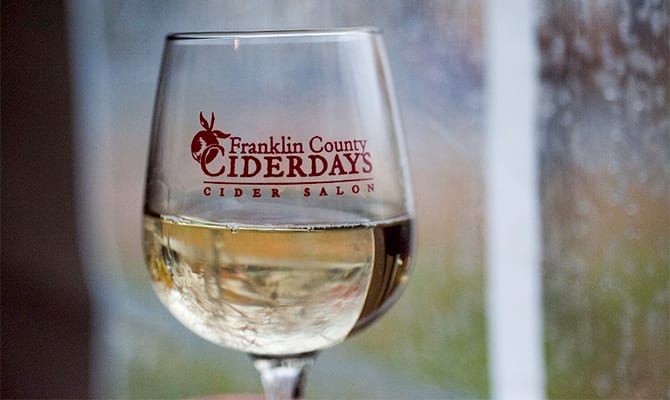 Hard cider, America’s beverage of choice during colonial times, has re-emerged as the fastest growing alcoholic beverage category in the United States today and Franklin County, the most rural and agricultural county in Massachusetts, has continued its unbroken tradition of apple growing and cider making in the hill towns.

Twenty-two years ago, local cider makers dedicated to keeping this old New England tradition alive, got together and created a community event, Franklin County CiderDays, that has grown to inspire cider makers from all over the country, attract visitors from around the world, and be the catalyst for the current cider renaissance in this country. The event, always held on the first weekend in November, is a community apple and cider celebration that also includes forums with commercial cider producers that has been credited with providing the impetus for the United States Association of Cider Makers. And yet, CiderDays remains true to its roots providing educational and cultural programming to anyone who wants to learn about good cider. 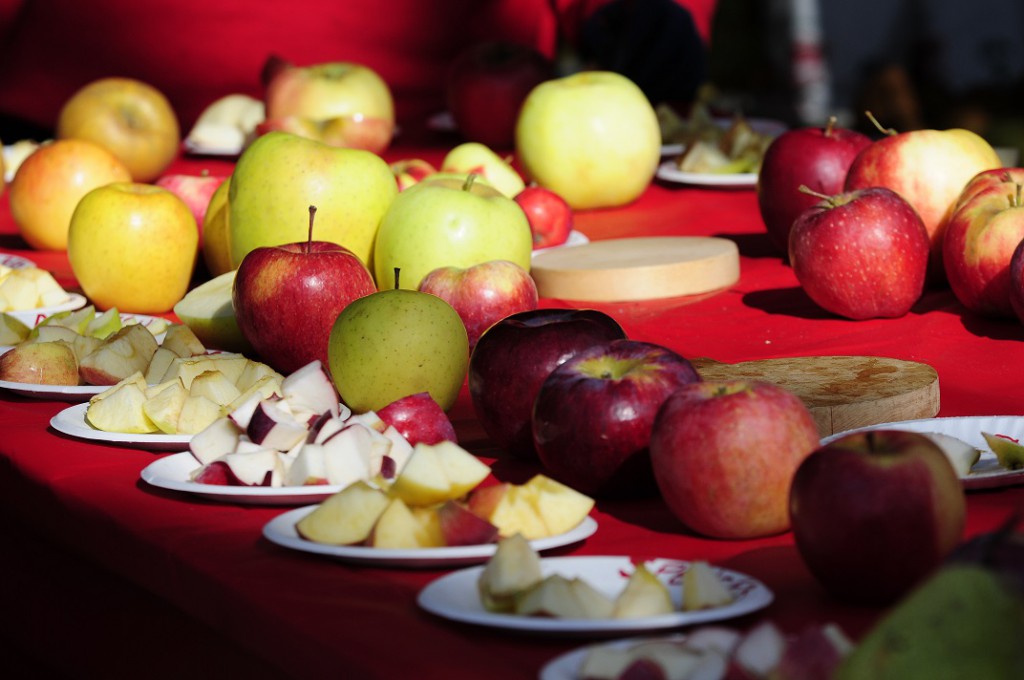 CiderDays is on the food and wine festival “must list” for those interested in immersing themselves in the history, technique, and landscape that produces this quintessential staple of the New England table. This year’s event has over 50 offerings varying from tastings, orchard tours, food pairings, cooking demos, harvest dinner, workshops and even an amateur cider maker’s competition. While some are ticketed, many of the workshops and activities are free. With so much to choose from, here are some highlights of this year’s event.

What’s your learning style? From large lectures, to hands on learning, to walking around an orchard, there is a workshop for you.
This year there is a special Friday night cider cocktails event with Darlene Hayes, author of Cider Cocktails: Another Bite of the Apple at The Arts Block in Greenfield. While drinking cider straight is one of life’s great pleasures, there is so much more you can do with this versatile nectar.  Learn how to make cider cocktails (and sample them too!) at this limited ticket event. 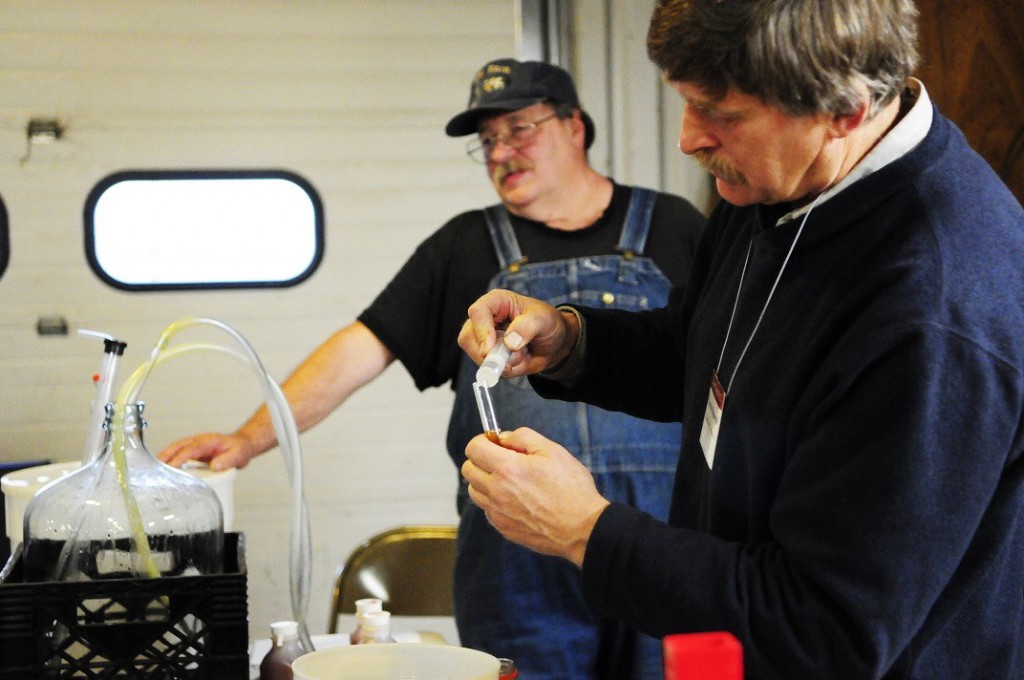 A perennial favorite is Cider Making 101, a hands-on beginner’s cider making workshop at Pine Hill Orchards in Colrain. Here you will get materials and the know how to be well on your way to making your first batch of cider. Many producers got their start here!
Other choices include orchard tours and talks on wild cider apples at Bear Swamp Orchard and Cidery in Ashfield as well as making barrel cider at Apex Orchards in Shelburne. 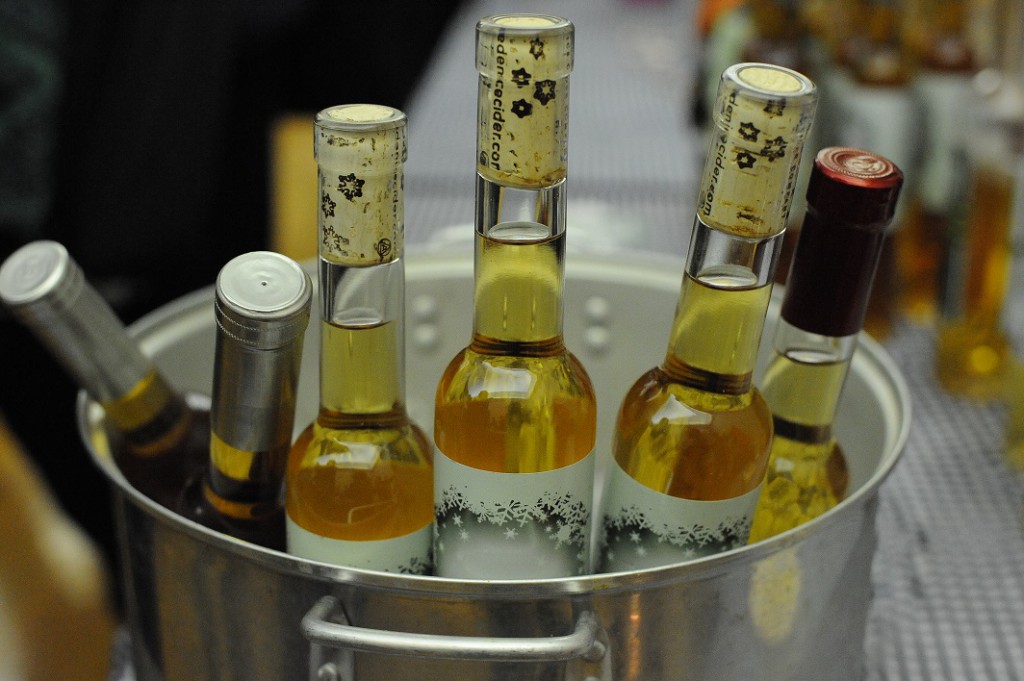 At the Buckland Community Center in downtown Shelburne Falls you can find workshops about renovating and top working old orchards, and exploring ice cider culture and practices and more!

While each workshop has some component of tasting as part of the program, these events are more focused.
The Cider Salon – the world’s longest-running hard cider tasting, there will be 40 producers and over 90 brands to taste from across North America and Europe. This year’s salons will have more room for sampling as they will be held on two floors of the main base lodge at Berkshire East Mountain Resort in Charlemont. 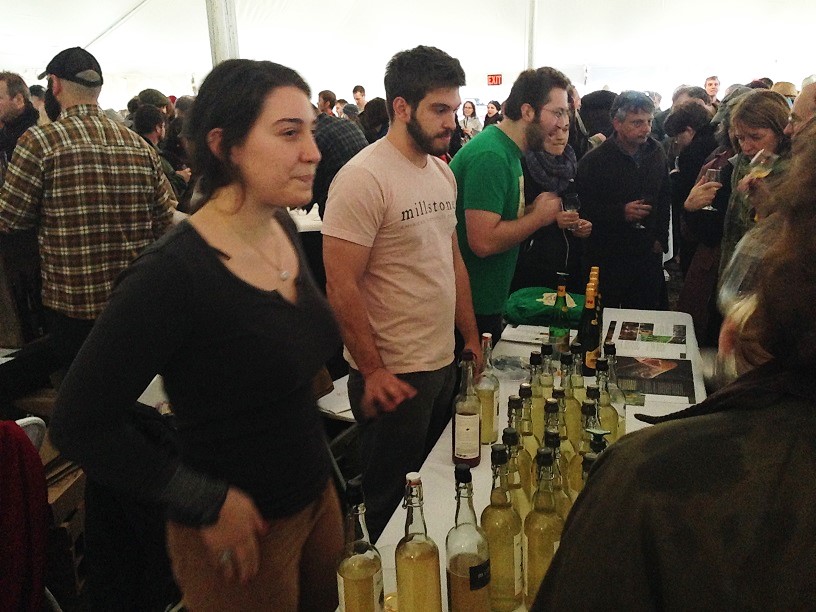 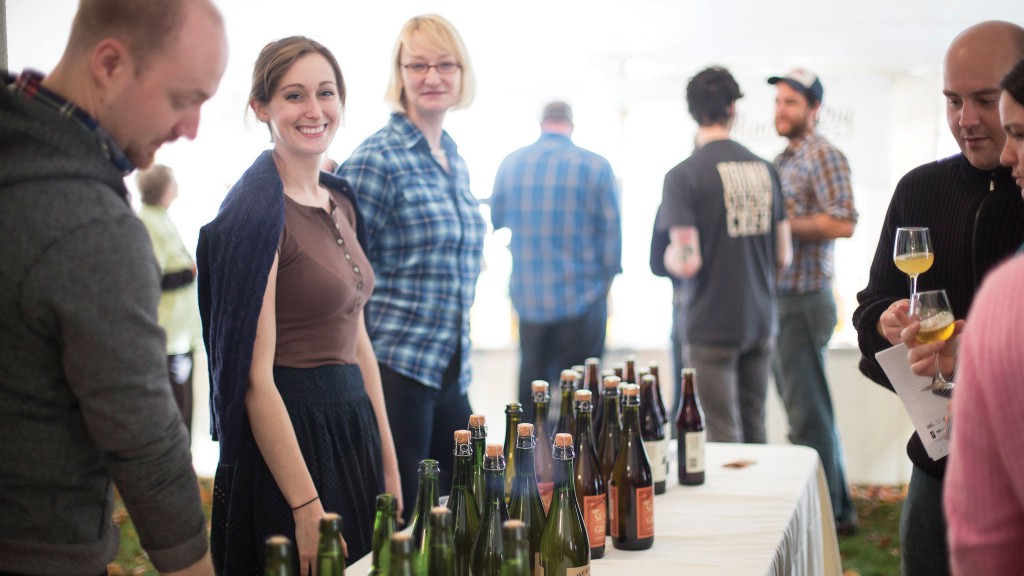 We realize there are only so many hours in the weekend, but there are many more opportunities to taste hard and sweet ciders, mead, cyzer, apples and pears at various locations in Franklin County throughout the weekend including West County Cider at Wellsmont Orchards. Check the schedule for details.

It is likely that you will have picked up some fresh apples from our orchards and you might as well learn a few culinary tricks with them.  Head to Clarkdale Fruit Farms in Deerfield for some apple-themed cooking demos with Sandy D’Amato, owner of Good Stock Farm and author of Good Stock: Life on a Low Simmer or with Erika Connell Cooper, of Butter & Birch. Or maybe you want to take your pie to a new level with New England Pie: History Under a Crust with author Dr. Rob Cox. 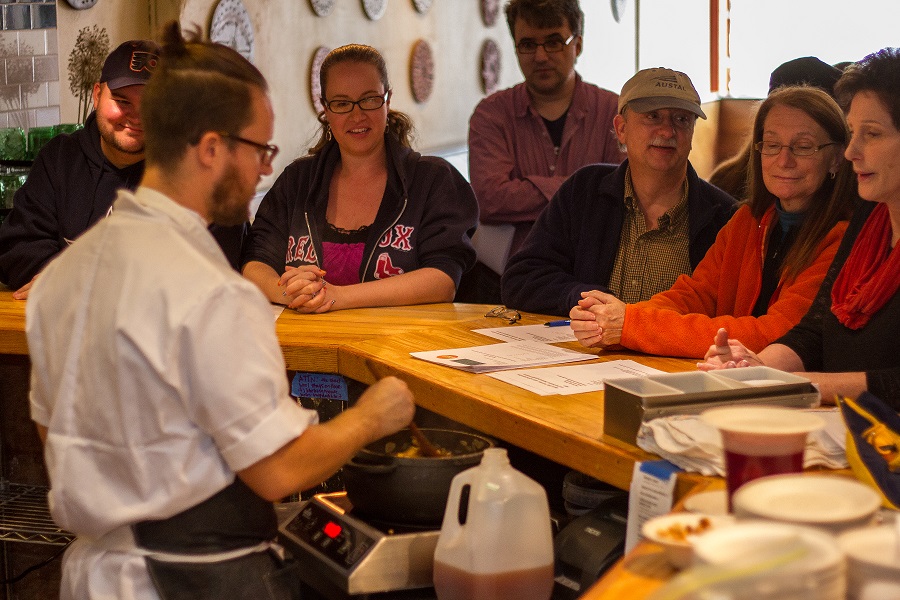 Fifth Annual CiderDays Amateur Cider Competition – open to any amateur cidermaker age 21 or older — will be held December 2016, roughly one month after CiderDays. This will allow cidermakers attending this year’s CiderDays to drop entries at the event rather than sending them via UPS. Registration for the CiderDays Amateur Cider Competition will open on Saturday, October 22, 2016 and close on Saturday, November 12, 2016.
CiderDays Locavore Harvest Supper — Held at The Warfield House in Charlemont, this locally-sourced savory fall feast features cider and apple varieties prominently. 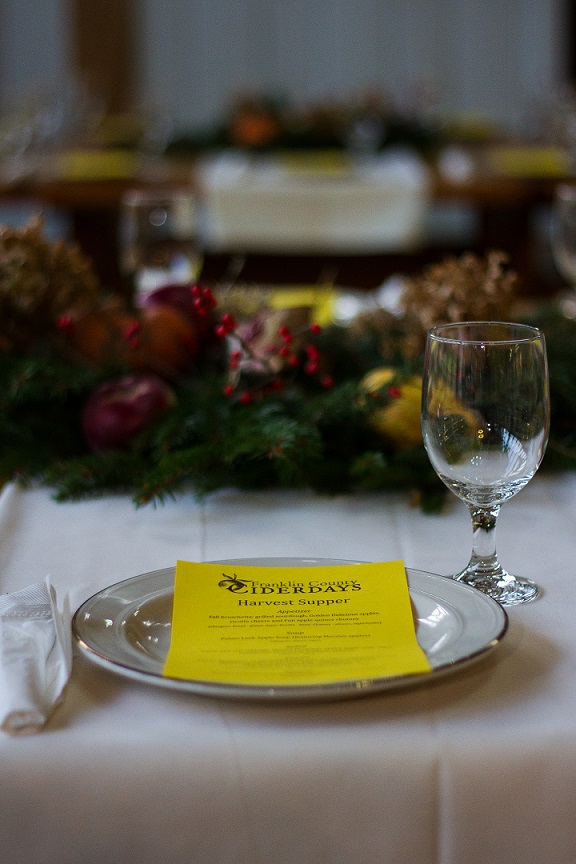 New Salem Preserves and Orchards hosts its Cider and Apple Festival with child-friendly apple pressing. Farm products, along with exhibits from local artisans, will be displayed within the courtyard of the cider mill. You will also have the ever-present breathtaking view of the Quabbin Reservoir and beyond. Several workshops take place as part of the festival including making cider vinegar, basic apple tree pruning and more.
For details on days and times of all the weekend’s events, visit www.ciderdays.org.  You might want to print the PDF of the schedule before you head out since many locations do not have cell service. 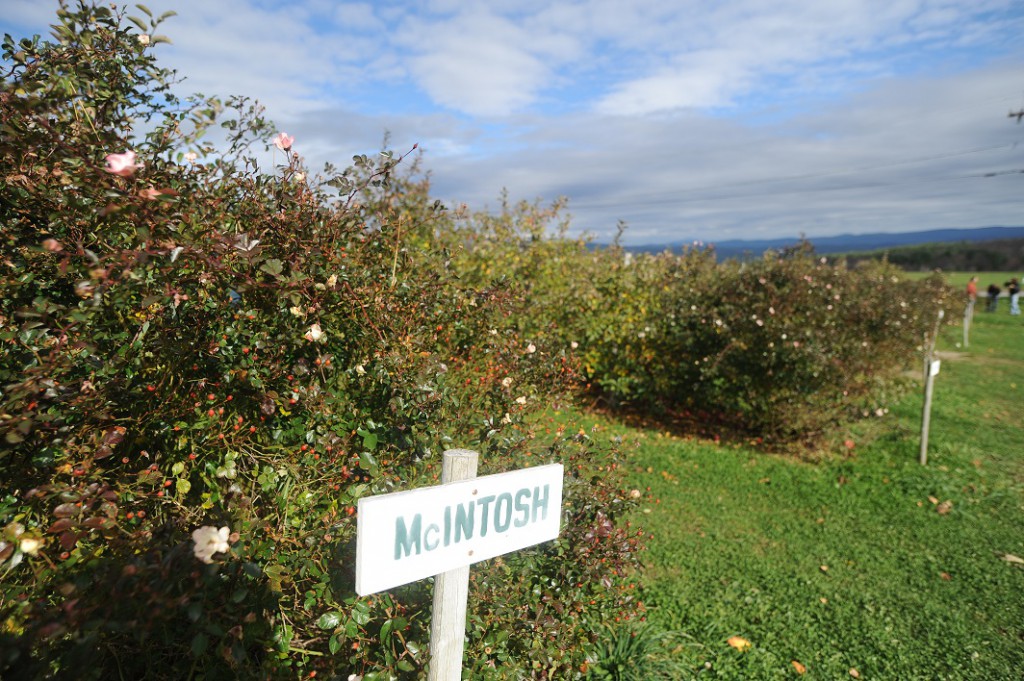 Part of the fun of CiderDays, apart from the events, is the getting the opportunity to explore the beautiful Franklin County landscape.  As you travel between the 21 venue locations you will find lively downtowns, breathtaking views, and why visitors describe the area as a breath of fresh air. And make sure to learn more about Franklin County!