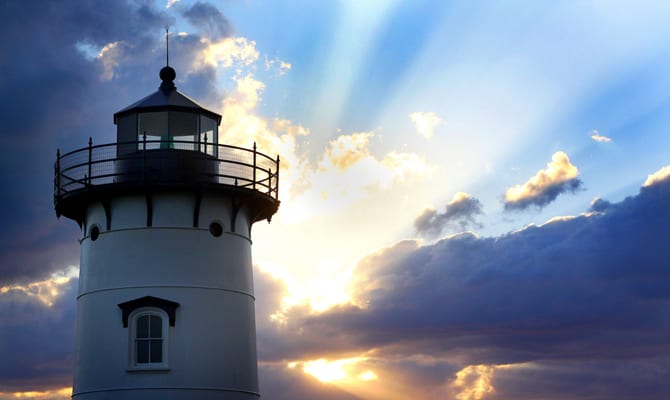 I am a Cape Codder, born and raised. I am part of the 12th generation of my family here, going all the way back to the second Mayflower voyage. My 9th-great grandfather, Deacon John Doane, helped settle the town of Eastham in the early 1640s.
I have no trouble saying that I can pretty much navigate my way between any two points on the Cape without difficulty, possibly blindfolded. I am familiar with just about every nook and cranny of the peninsula’s 394 square miles.
But the islands of Nantucket and Martha’s Vineyard? That’s a different story. Truth be told, my feet had not touched the soil of either island until recently.
So, what is it like seeing Martha’s Vineyard for the first time? First, unlike Nantucket, the Vineyard is always within sight when on the ferry, which helps build the anticipation. During the island’s busy season, the ferry has service to Oak Bluffs, which is where this journey began. 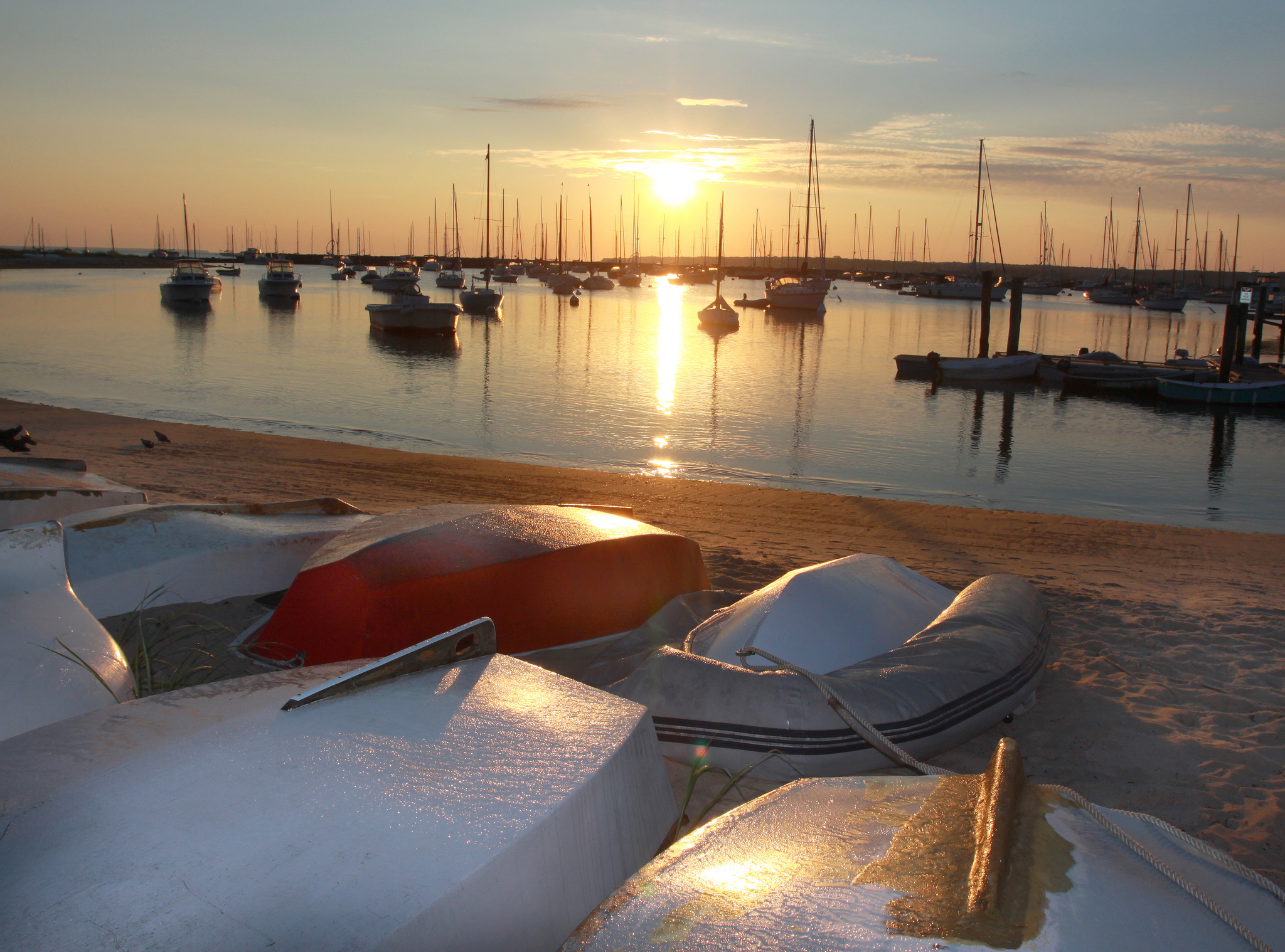 Stepping foot off of the ferry in Oak Bluffs, there is a sense of wonder and excitement that is brand new, yet familiar. Martha’s Vineyard and Nantucket have that ‘Olde Cape Cod’ feel, a sense of deliberation and tranquility that seems missing all too often these days.
Upon disembarking from the ferry, spectacular Ocean Park stretches out in all its glory. It is so green and wide open, with a magnificent bandstand and a delightful fountain occasionally dotted with congregating geese. 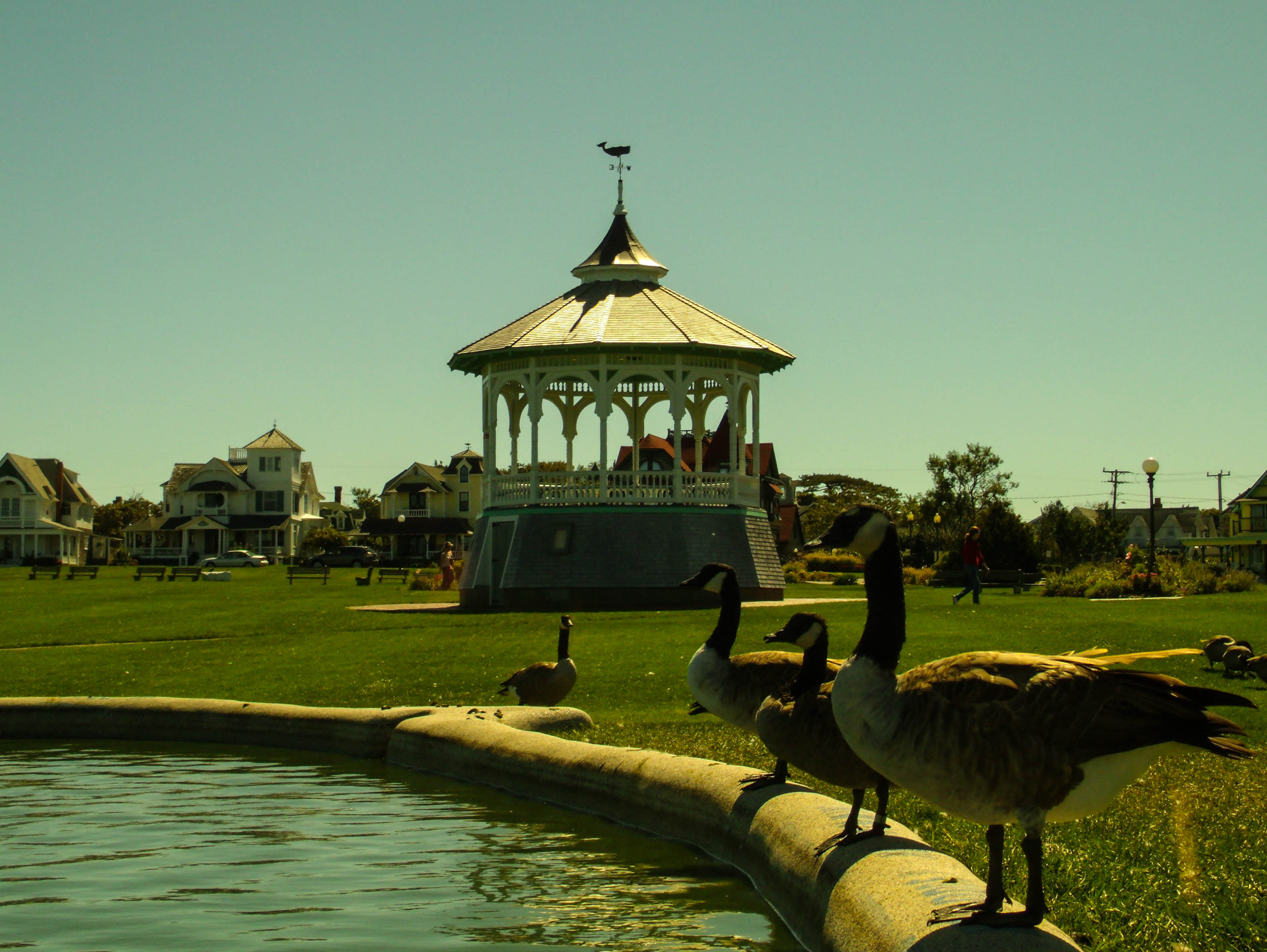 A few feathery friends enjoying themselves at Ocean Park

This spot is also bordered on one side by enchanting Victorian-era homes. In fact, these homes were so impressive that the town was called ‘Cottage City’ before being renamed Oak Bluffs in 1907. President Ulysses S. Grant watched fireworks from the rooftop of the Dr. Harrison Tucker House, one of the historic homes surrounding Ocean Park, during a visit to the island in 1874.
Weaving through the streets of Oak Bluffs and up to Vineyard Haven is a beautiful ride by bicycle, hugging the shore along the way. A first-timer should, of course, bring an itinerary of places to see, but leave ample time for casual sightseeing as well, in this visitor’s opinion.
Lighthouses are a passion of mine. I love them and am lucky enough to have access to several on Cape Cod. It’s no surprise, then, that lighthouses were a central part of my first Vineyard trip. East Chop Lighthouse is wide open and easily accessible; only a white picket fence and squeaky turnstile keeps guests from being able to walk right up to the cast iron giant. 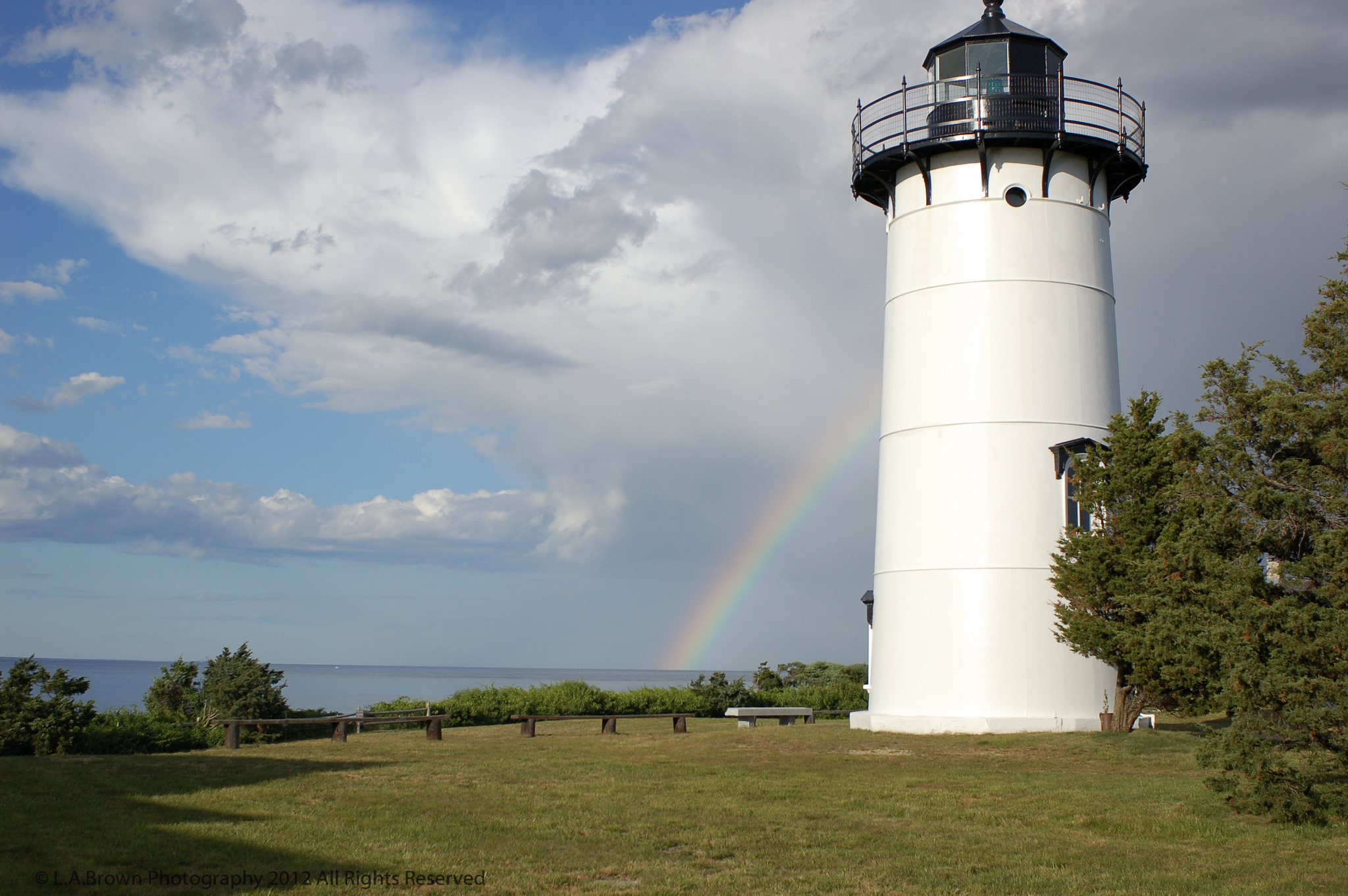 All the colors of the rainbow at East Chop Lighthouse by L.A. Brown Photography


Telegraph Hill, where East Chop stands in Oak Bluffs, actually happens to be the site of one of the first telegraph messages received in the first half of the 19th century. West Chop Lighthouse in Vineyard Haven, which sits behind the fence of a Coast Guard Station, can be seen alongside the main building. Strolling up to it, however, is not recommended, as the area is private property. 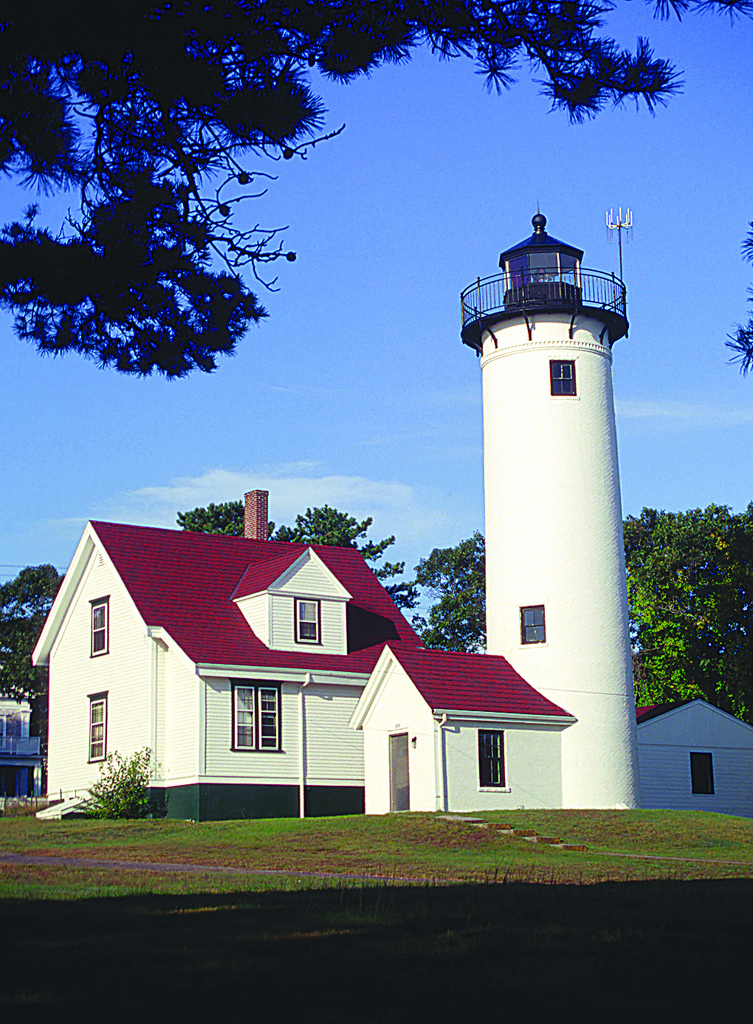 With the aid of a GPS, I left scenic Vineyard Haven, slicing through the wooded interior of the island as I headed for Edgartown. By this point, approaching twenty miles of bike riding on the day, I was beginning to tire a bit, so I coasted once I reached the beautifully familiar streets of Edgartown. I can also attest that after my Vineyard trip, watching the movie Jaws took on an entirely new life.
My bike riding adventure took a painful turn upon arriving at Edgartown Lighthouse, the third lighthouse to visit on my venture. This is where both of my quadriceps muscles cramped up (rather excruciatingly, I might add). It took all of my self-control to not yelp in pain in front of a young couple and their two children, but I managed, and I’m sure their day was better for it. 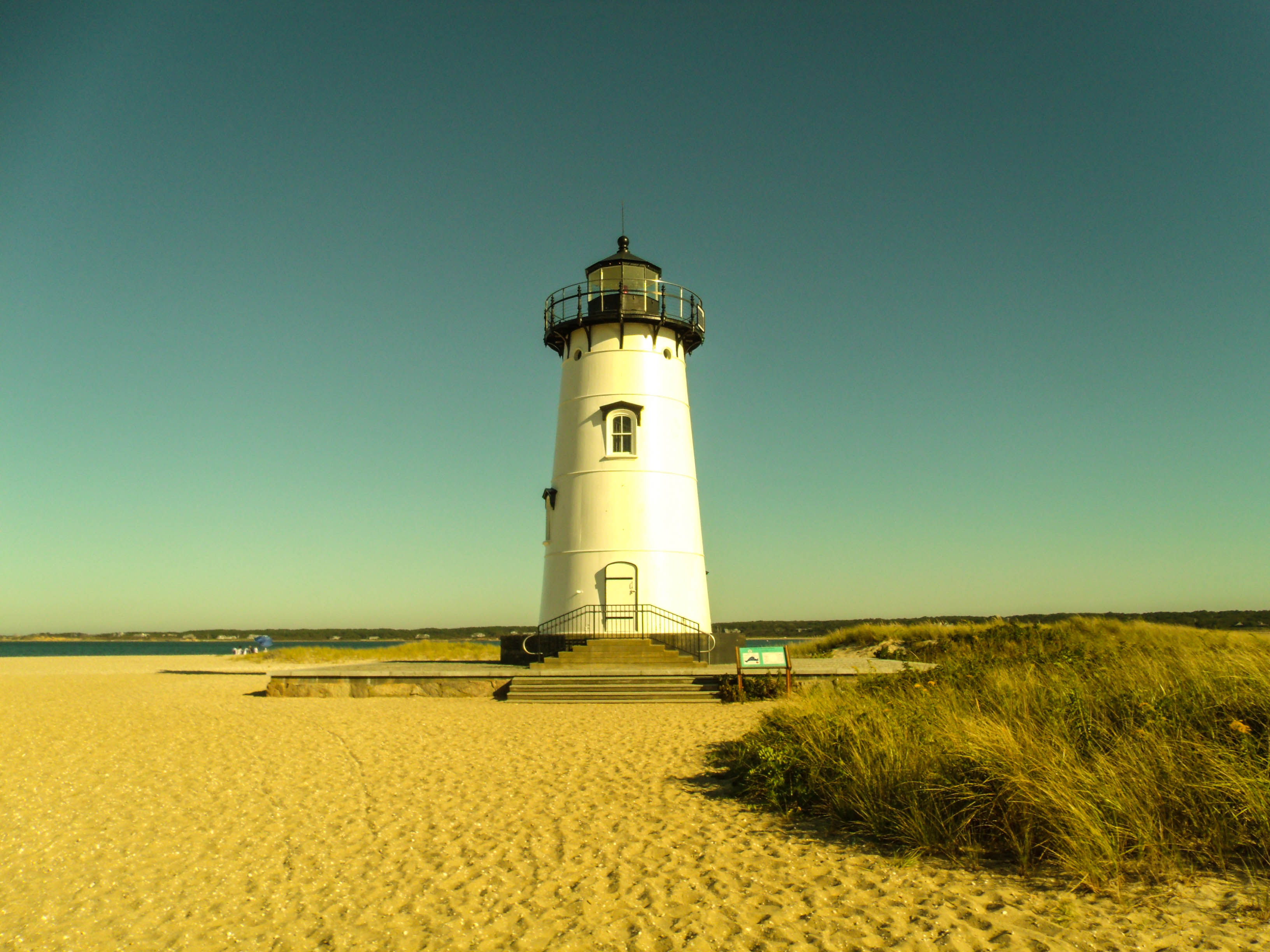 Edgartown Lighthouse sits a few hundred yards out on the sandy shore of Edgartown Harbor. The view straight across to the island of Chappaquiddick is wonderful. It was a bit surreal to watch the Chappy Ferry travel the scant 527 feet between the docks. The boat barely looked as though it began moving before reaching the dock on the other side. The Chappy Ferry became a top priority for my return trip to the Vineyard, which I was already turning over in my head.
By now, the sun had started to dip low in the sky and the day came full circle at Ocean Park. I took a seat on a bench, after returning my rented bike, and reflected on what I had seen and done during the trip.
In less than one day, I had seen a variety of well-known spots, such as the lighthouses, Vincent House Museum in Edgartown and Flying Horses Carousel in Oak Bluffs. Riding the bicycle (highly recommended) allowed me to happen upon a few off-the-beaten-path spots as well, including the amazing views at the West Chop Club Overlook in Vineyard Haven. 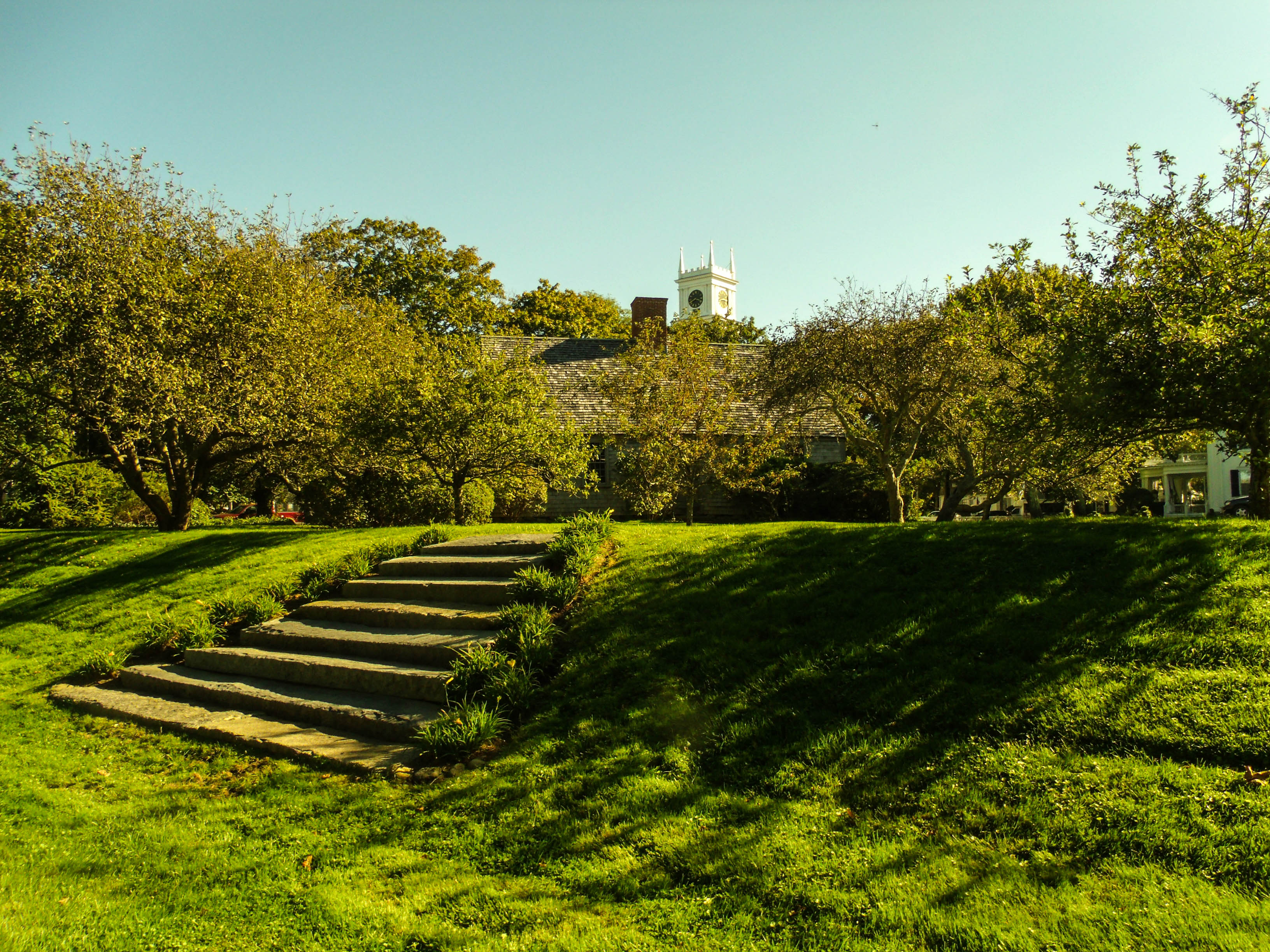 The view outside Vincent House Museum in Edgartown

Thus ended the first ever Martha’s Vineyard trip for this 12th-generation Cape Codder. There have been many more since, and although I cannot consider myself an expert, I know it much better now. It is easy to see why so many, from the average traveler to presidents, flock to Martha’s Vineyard. I can hardly wait to go back over this summer!
Christopher Setterlund is a 12th-generation Cape Codder. His second book, In My Footsteps: Nantucket & Martha’s Vineyard, will arrive in stores later this summer. You can check out his blog here, and follow him on Twitter @ChrisSetterlund.