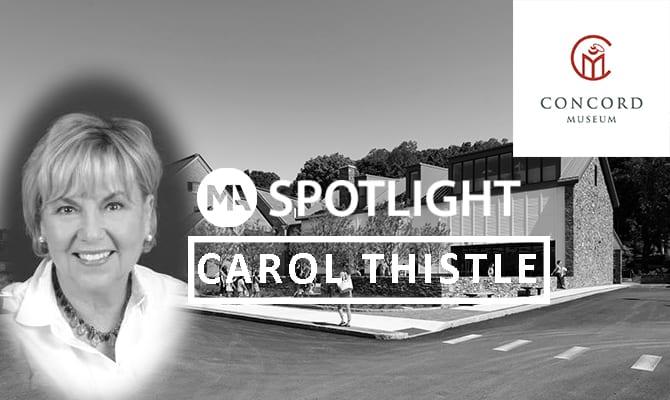 Concord – The Crossroads of American History Carol, tell us about your marketing career, including your work at the Concord Museum?
One of the greatest joys in my marketing and public relations career has been promoting so many incredible destinations in our state. Massachusetts has so much to offer local, national and international visitors with its natural beauty, seacoast and of course its history.  In the past 25 years, through branding campaigns and strategic marketing, I have promoted some of Boston’s key icons, including Faneuil Hall Marketplace, the Boston Harbor Islands and the Museum of Science – as well as the cities of Gloucester and Salem.

For the past 3 ½ years, I have been the Marketing Director for the Concord Museum as it has undergone an exciting $13 million dollar capital campaign, expansion and renovation. I’m also currently serving on the Board of the Concord’s Chamber of Commerce as well as the Advisory Board for both Discover Concord and the Town of Concord’s new Tourism initiative. The $13 million capital campaign supported construction of the new Anna and Neil Rasmussen Education Center, which opened in fall 2018. What are some of the educational features?
With this state-of-the-art Center, we host Forums on women’s suffrage, the abolition movement, revolutionary history, decorative arts and other topics connected to our collection. Since the opening of the Rasmussen Education Center, the Museum has served 14,000+ students through a variety of curriculum-based educational programs. Kids can explore the world of Henry David Thoreau, cook over an open hearth, and learn about Native culture through archaeology and so much more. In 2019, the Paul Revere’s Fund provided free bus transportation to the Museum and underwrote all program fees for nearly 4,000 students from Lowell, Lawrence, and Everett. Speaking of Revere, you have an amazing new exhibit coming devoted to Paul Revere from February 14 to June 7, 2020.  What are some of the details?
We are all familiar with the words, “Listen my children, and you shall hear….” by Henry W. Longfellow, but there is so much more beyond Paul Revere’s midnight ride. Revere was an artisan, inventor, political activist and a master networker.

This new exhibition, curated by the American Antiquarian Society, is Beyond Midnight: Paul Revere and His Ride.  It re-examines the man behind the legend and features objects connected to the events of 1775, including Concord Museum’s famed lantern ordered hung as a signal by Revere himself. Additional highlights include the 1922 painting, Paul Revere, by the renowned artist N.C. Wyeth; tea salvaged from Boston Harbor; a printer’s manuscript of Longfellow’s “Paul Revere Ride” and an impressive silver tea service made by Revere.

Beyond Midnight brings to life Revere’s creative spirit, tremendous capacity to adapt to changing times, and his lasting impact on the social, economic and political life in America. The exhibition is in two parts and is concurrently presented at the Concord Museum and the Worcester Art Museum. We encourage everyone to visit both locations to see the entire exhibition – and learn the full story of this American patriot. Museum Executive Director Tom Putnam often says that Concord shaped our nation and our founding ideals. How does the Museum represent the legacy of Concord’s original patriots, literary giants and cultural artifacts?
As part of the Museum’s $13 million renovation in October 2019 the Museum officially reopened its doors inviting the public to see our newly renovated galleries. This is part of a two-year renovation project creating 13 new gallery spaces. One of the goals of the New Museum Experience is to showcase under-represented voices in Concord’s and our country’s founding history, including Native people, African-Americans and women.

The People of Musketaquid gallery is dedicated to the earliest inhabitants of Concord. The Stone Turtle Display, which contains 600 stone tools dating back 12,000 years, was a collaboration between Aquinnah Wampanoag artist Elizabeth James-Perry and the Museum’s archeologist Shirley Blancke. The new Concord: At the Center of Revolution gallery displays historical objects like the powder horn of 21-year-old Abner Hosmer who died at the North Bridge and the lock and key to the jail cell where Henry David Thoreau was incarcerated and wrote “Civil Disobedience.” 2020 marks the 100th Anniversary of the 19th Amendment guaranteeing women’s constitutional right to vote. Tell us about your upcoming exhibit on women?
In summer 2020, the Museum is presenting, Every Path Laid Open: Women of Concord and the Quest for Equality. Included in the exhibition are rare artifacts from the collection that tell the story of Concord women of the past—some famous and some almost invisible. Each portrait, needlework, or piece of furniture, carefully preserved by succeeding generations and now by the Concord Museum, makes it possible to create meaning from the lives of ordinary citizens as well as prominent residents. There is also a special media component in the exhibition celebrating today’s women of Concord—from educators to entrepreneurs, firefighters to farmers, and athletes to activists. The title of the exhibition comes from a compelling quote by 19th-century feminist Margaret Fuller describing the ultimate goal of her fellow advocates for women’s suffrage:  “We would have every path laid open to Woman as freely as to Man.”

The new film Little Women features Concord’s most famous literary figure Louisa May Alcott.  What is the museum’s connection to Alcott’s literary legacy?
Yes, we are so excited about the film and we have already seen an increase in visitation to Concord because of it. Louisa May Alcott’s copper tea kettle that she used as a nurse during the Civil War is showcased in the Museum. Louisa almost died during the endeavor and was inspired to write her first published work, Hospital Sketches, which helped launch her remarkable and prolific career as one of America’s favorite writers.

The Concord Museum really represents a “gateway” to all of Concord’s rich history. In our lobby we have a digital presentation of 14 other attractions in Concord like the North Bridge, Walden Pond, the Minuteman National Park and the Louisa May and Alcott’s Orchard House. We encourage everyone visiting to explore all of Concord and its illustrious history.  For more information www.concordmuseum.org