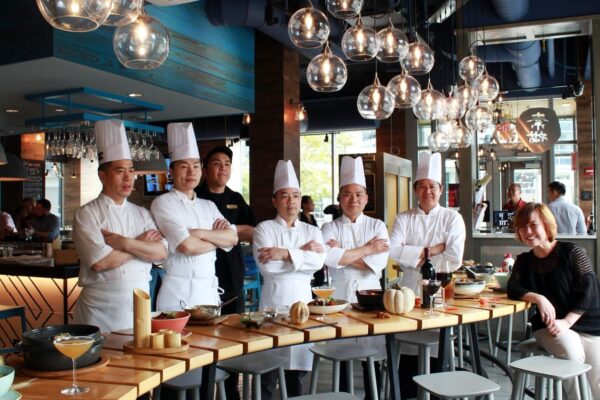 Ahead of the curve: Sumiao Hunan Kitchen pivots to face a new reality

Sumiao Chen, owner of Sumiao Hunan Kitchen in Cambridge’s Kendall Square was ahead of the curve when the coronavirus began rearing its ugly head in 2020. A native of Hunan, China, she was in touch with her medical school classmates who had direct knowledge of how it was developing in Wuhan.

“I took it very seriously. I started preparing my restaurant immediately and we went to ‘takeout only’ in back in March 2020, before the state mandated the closing,” explained Chen.

After making sure there were plenty of takeout boxes in stock, Chen and her team went to work, converting the three-year-old business from a fine dining restaurant into takeout only, implementing contactless food pick-ups, extra safety precautions. While it was a smooth transition, Sumiao Hunan Kitchen had to lay off half its employees.

Despite the trying times, Sumiao found a way to give back to her homeland through a donation program. The restaurant created two new dishes and donated all of the proceeds – $19,000 – to the support efforts in Wuhan to fight the pandemic that was making its way around the globe. Since then, Sumiao has also donated hundreds of lunchboxes to Boston Medical Center.

Chen is grateful for the support of her Cambridge community, mindful of the employees depending on her to keep her restaurant running—an eatery that’s the result of a career detour and a lifetime passion.

After graduating medical school in China, Chen became a scientist, eventually ending up at Novartis, where she conducted cardiovascular and diabetes research. But always in the back of her mind was the desire for something else – to open her own restaurant, cook delicious, authentic Chinese food, and serve it to the masses.

When she would go out to lunch with colleagues at eateries near her office, she’d ask herself, “Why can’t I open up a place like this?”

So, Chen trained at the famed Le Cordon Bleu, and the rest is history. She began scouting for a location and a lease in 2015, then hired an architect and graphic designer to turn her vision into reality. Three years ago, that dream was realized when she opened Sumiao Hunan Kitchen, bringing her homeland of Hunan to Cambridge.

“Our specialty is highlighting Chinese food from a local region in China. We interpret it in a very modern way and we choose locally available ingredients along with my understanding of Western culture.”

But the 5,000 square foot Sumiao Hunan Kitchen is her own, complete with indoor and outdoor seating. Fortunately, the skills developed in the pharmaceutical world have been transferable.

“I learned project management skills from drug testing in government projects,” says Chen. “I’ve taken those management skills into a restaurant. Additionally, with my medical background, I bring a health concept and a food safety concept into the restaurant. When it comes to the menu, it’s more structured toward nutrition and more aware of potential allergies.

“This is my passion and my dream. I always loved food, always,” continued Chen. “I’ve always loved sharing delicious food with my friends, family, colleagues, and neighbors.”

Laced into the community: Charles River Running encourages movement for all

Charles River Running is a shoe fitting store based in Norwood, MA. Below the small business owner shares some details…

Chococoa Baking Company is a bakery and café based in Newburyport, MA. Below, owners Alan and Julie share some reflections…

Emmanuel Music, Inc is an ensemble of singers and instrumentalists based in Boston. Below, the team shares some details on…