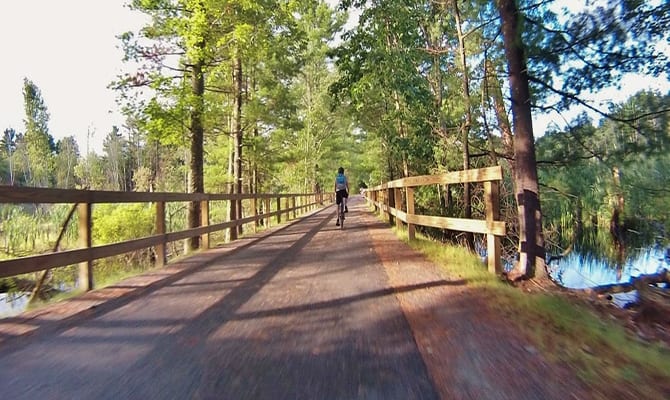 Once bustling with boxcars full of goods and coal, railroads played a huge role in the development and industrialization of the West. The first wooden railroad was being built in the late 1700s when the settlers first built communities and were a huge part of building forts during early wars. Most of our railway system was built after the 1900s, but later on, trucks, automobiles, and airplanes took over most of moving freight and in the 1980s most railway lines were closed down.
More recently cities and suburbs have turned these old rail lines, into pedestrian Rail Trails that still preserve some of the histories of our earlier American days.
These Rail Trails allow all non-motorized activities. Do you have a bike that is getting rusty? These are the perfect places to it out and use it again. Turn back time, and set out for a scenic adventure through local history.
Here are the top five must-visit historic Rail Trails in Central Massachusetts to explore: The Narrow-Gauge Rail Trail is a mostly unpaved trail located in the town of Bedford. This 3-mile long trail is a great option for young children, as it is quite short in length. It does connect to the Minuteman Bikeway eventually if a longer visit is desired. Before this Rail Trail was established, it was the nation’s first narrow-gauge railroad. This historical path is now a wonderful route that is almost entirely a dirt road, unlike the other rail trails mentioned.
Find more information about the Narrow Gauge Rail Trail
These Rail Trails are great options that offer fresh air, exercise, and re-connection with nature. Many of these Rail Trails also have wonderful historical stories. As a result, these trails can offer a great educational experience to the whole family. Boredom can often creep in during these trying times, but it hopefully won’t with the use of these outstanding Rail Trails.
After venturing out onto these historic trails, do some research and learn more about railways were a part of our local history.
All of the pictures shown are labeled for reuse.