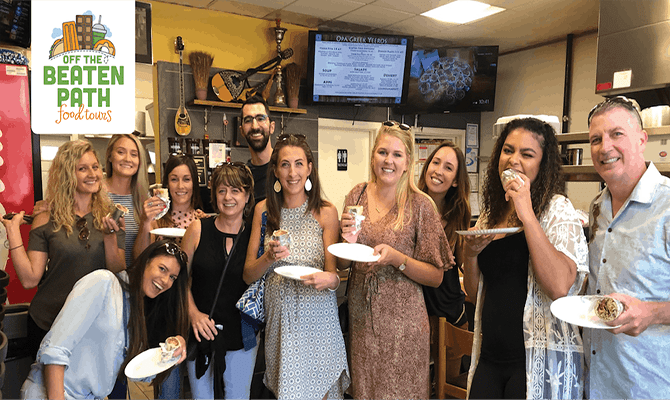 Posted by Lizzie and Sam, guest blogger of Off The Beaten Path Food Tours

When you’re visting Massachusetts, you may be tempted to look up the best restaurants in Boston. Well, we can tell you that on these lists, you’ll see that these top restaurants are consistently located in Cambridge, Massachusetts, a city very close to Boston proper and one of the easiest to get to on the MBTA Red Line train. In fact, if you take some time to explore the area by the Charles River or Beacon Hill, you’ll find that Cambridge is located just a short walk over the Longfellow Bridge.
There are three main areas of Cambridge that are easily accessible to the MBTA train from other parts of the city. If you’re at the airport, you can take the South Station Red Line train inbound towards Park Street T stop and continue on to Kendall Square, Central Square, and Harvard Square which are all in Cambridge. So if you only have a few days to spend in Boston, it is worth taking a trip out to Cambridge and to hit up each one of these Squares. Off The Beaten Path Food Tours offers tours of each of these Cambridge destinations. Kendall Square
If you travel from Park Street towards Cambridge, the first square that you’ll arrive at is Kendall Square, which is also home to the Massachusetts Institute of Technology (MIT). Kendall Square has a modern, urban, feel with multiple office high rises and is the innovation hub of the city. Some of the world’s best pharmaceutical and biotech companies have headquarters here, and startup founders mingle freely with academic minds. Not surprisingly, the food scene in Kendall Square is also cutting edge. Off The Beaten Path Food Tours offers a food and innovation food tour on Saturdays, where locals and visitors alike dine on on the best food in the city from jewish baked goods to savory pan-fried dumplings to being served by a local chef focused on farm-to-table cuisine to delicious pizza to hand-crafted ice cream with inventive flavors. You’ll wrap your day up sipping a cocktail/mocktail at one of the classiest lounges in the city. Central Square
Next up on the Red Line train, also near MIT, is Kendall Square’s funky, artsy, culturally diverse sister — Central Square. This urban hub is always bustling and its food scene is unmatched in creativity and excitement. Recently, Central Square became an official business improvement district, which means it’s an exciting place to be! They commissioned a large-scale art mural project which embraces the walls and restaurants along Massachusetts Avenue. Off The Beaten Path Food Tours offers a popular Central Square Food and Mural Arts Tour which shares the background of these murals, their themes, and the stories of their artists. On the food tour, you’ll also be able to try handcrafted bubble tea, the best grilled cheese in the city, an arcade (21+), delicious bao sandwiches, and even a tour of a famed music venue. You’ll also be able to walk through the city’s famous Graffiti Alley, which is an iconic graffiti walkway that changes daily. Visiting Central Square will bring a smile to your face and inspiration to your heart. Harvard Square
Further down on the Red Line is the cobblestone streets of Harvard Square, much beloved in the city of Cambridge and world-wide. The hallowed gates of Harvard and the oft-filmed Harvard Yard abridge a surprisingly modern food scene that’s constantly changing. If you love Europe, you’ll love Harvard Square. But maybe you don’t know of all of the hidden gems and small businesses that are present in this part of town. Off The Beaten Path Food Tours will take you off the beaten path to explore these hidden gems in Harvard Square. On their Sunday Food Tour, you’ll be able to discover an old family-owned hideaway underground tavern, the best sticky buns in the city, a Latin-fusion gem set in a historic setting, Mark Zuckerberg’s favorite pizza, and the music hall where Joan Baez was discovered. In fact, Harvard Square has made quite an impact on the region’s music scene. So after the tour you can grab a show at one of the menu venues. Or if you have a craving for chocolate, they also offer a popular Harvard Square Chocolate Tour which is like a walking class, in that you can try everything from a roasted cacao bean to chocolate bar and a variety of chocolate treats around the city — from hot chocolate to chocolate balsamic vinegar to ice cream to rich brownies.
On your next trip to Boston, we hope you venture “across the river” as the locals say, and explore all that Cambridge, MA has to offer. There are so many fun things to do in Cambridge including the four different Off The Beaten Path Food Tours tours. So grab your Charlie Card and hop on the red line across the Charles River.