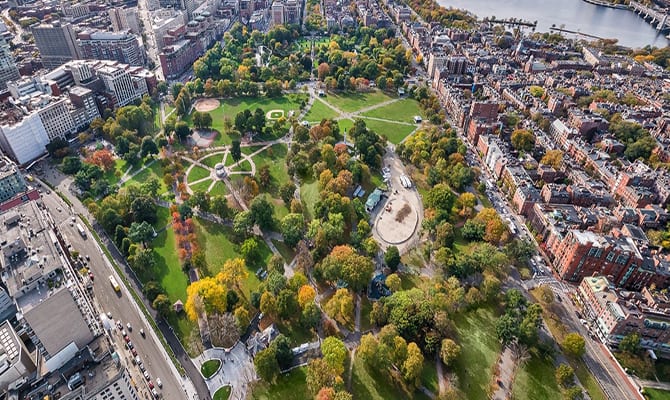 The Boston Common is one of the most treasured greenspaces in the country. Founded in 1634, its fifty acres serve as an oasis in the center of downtown Boston, attracting a million of people every year, both residents and visitors from around the world. From its early times to the present day, the Common has been at the center stage of American history. It has witnessed executions, sermons, protests, and celebrations, and it has hosted famous visitors from Generals Washington and Lafayette to Reverend Martin Luther King Jr. and Pope John Paul II.
In Colonial times, it served as a meeting place, pasture, and military training field. Bostonians in the nineteenth century added tree-lined malls and paths and, following the Civil War, monuments, and fountains. The twentieth century saw victory gardens, troop entertainment, rallies for civil rights and against the Vietnam War, and the first papal mass in North America. Today, the Common is the scene of sports, protests, and events large and small. Yet for all its adaptation to modern life, the Common remains a green retreat reminiscent of its storied past.
Now, the Boston Parks and Recreation Department and the Friends of the Public Garden are collecting public input about the future of the Boston Common through an expansive public engagement process. Park lovers from near and far are encouraged to share their stories and memories, give feedback on the park’s conditions, and offer up ideas to be incorporated into the Boston Common Master Plan. The final plan will define a strong, clear vision that will celebrate the history of place and craft a comprehensive revitalization strategy for this legacy public greenspace asset.
Take the Boston Common Master Plan online survey here.

“We have a once-in-a-generation opportunity to create a bold plan that ensures this iconic public greenspace continues to thrive and fulfills the needs of the millions of people who enjoy it every year,” said Liz Vizza, Executive Director of the Friends of the Public Garden, a parks advocacy group that works in partnership with the Boston Parks Department to renew, care, and advocate for Boston’s three downtown parks, including the Boston Common. “This outreach process is designed to make sure that the Boston Common truly lives up to its reputation as ‘the people’s park’ – accessible and welcoming to all, supporting a wide variety of uses that reflect the needs of the community today and into the future.”
For more information about the survey, please visit www.bostoncommonmasterplan.com. Residents and park users are encouraged to take the Boston Common Master Plan survey, which will remain active through December 31, 2019.
The History of the Boston Common
The fifty acres of the Boston Common have belonged to the citizens of Boston since 1634, when each householder paid a minimum of six shillings toward its purchase from William Blackstone, the first European settler in Boston. The original Common was gently rolling scrubland, sloping gradually from Beacon Hill to the tidal marshes of Back Bay. It was only lightly wooded, with perhaps three trees of notable size, including the legendary “Great Elm.” Of the four original hills and three ponds, only Flagstaff Hill and the Frog Pond are now discernible. The seventeenth-century Common, rough and rural, was well suited as a pasture, its primary purpose. The village herd of seventy milk cows grazed peacefully, watched over by a town-appointed keeper. The Common was also a frequent site for hangings and other forms of execution of murderers, thieves, deserters, pirates, natives, and religious dissenters. Coasting on the Boston Common December 1930 Courtesy of the Boston Public Library Leslie Jones Collection
The story of the eighteenth-century Common is dominated by the events surrounding the Revolution. British troops occupied the town, and by 1775 the Common was an entrenched camp with a garrison of 1,750 men. The British troops set off from the Common for encounters at Lexington and Concord and later at Bunker Hill. Following the British evacuation in March 1776, Bostonians reclaimed the Common.
As Boston grew and prospered in a new nation, its inhabitants saw in their historic Common a precious heritage. New residences arose along the bordering streets, and the Common gradually became more park than pasture. By 1830, the city had banished the cows, filled several ponds, and added tree-lined malls and paths. In 1836 the entire space, a mile in perimeter, was enclosed with a handsome iron fence financed in part by public subscription. The Boston Common Wood Engraving, 1858 (Courtesy of Digital Commonwealth)
In an age of optimism and public display, the nineteenth-century Common played host to an extraordinary chronicle of events, both serious and fanciful, including balloon ascensions and early football. During the Civil War, the Common witnessed antislavery protests, recruitment rallies, a wild victory celebration, and then a mass demonstration of grief at the death of President Lincoln.
The twentieth century was a time of change for the Common. In 1897, the park saw the construction of the nation’s first subway, and an underground garage half a century later. Two world wars brought victory gardens, war bond rallies, troop entertainment, and victory parades. The Common was the site of historic events like Boston’s tercentenary celebration of 1930, speeches by national figures such as Martin Luther King Jr., the protest rallies of the 1960s, and in 1979 the first papal mass in North America.
By the 1970s the Common had suffered from many years of neglect, with half of its trees lost, the Frog Pond empty, fountains defunct, fencing removed, and a grave imbalance of use and care. In recent decades, public-private efforts have brought notable improvements including new fencing, a refurbished playground and bandstand, a rejuvenated Frog Pond with an artificial ice rink, and restoration of the Brewer Fountain and Plaza.

Photo Credit: Jan Trousilek
See the park as it is today. Watch the Friends of the Public Garden’s video: Boston Common 2019
Today, the historic Boston Common attracts one million people every year, both residents and visitors. It is a place of sports, informal and organized; exhibitions; musical events; a Shakespeare festival; rallies and protests; charity walks and art exhibits; and on New Year’s Eve, Boston’s famous First Night. Once a year, in long custom, the Ancient and Honorable Artillery Company, formed in 1638, marches again before the dignitaries of the day.
The Common remains and always will be the center stage of civic life, a place to play and to protest, and a green retreat in the heart of a busy city.
*Main Image Photo Credit: Kyle Klein Photography