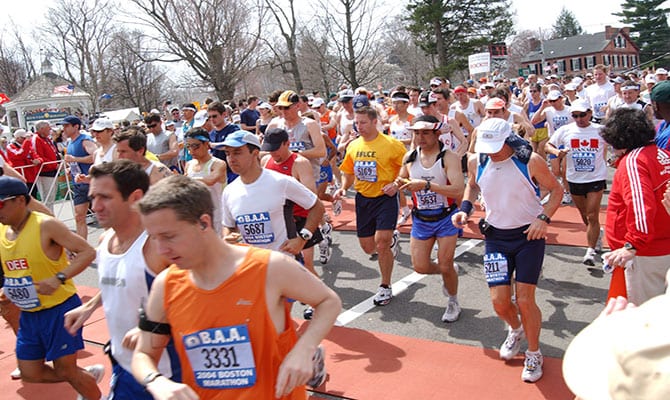 It’s one of the most energetic days known to Massachusetts, Patriot’s Day. A day where, with a little good luck, the weather is beginning to warm; a day where baseball is graciously welcomed back to The Hub; and a day where 500,000 spectators gather along a 26.2-mile stretch to watch roughly 26,000 individuals complete the world’s oldest marathon. 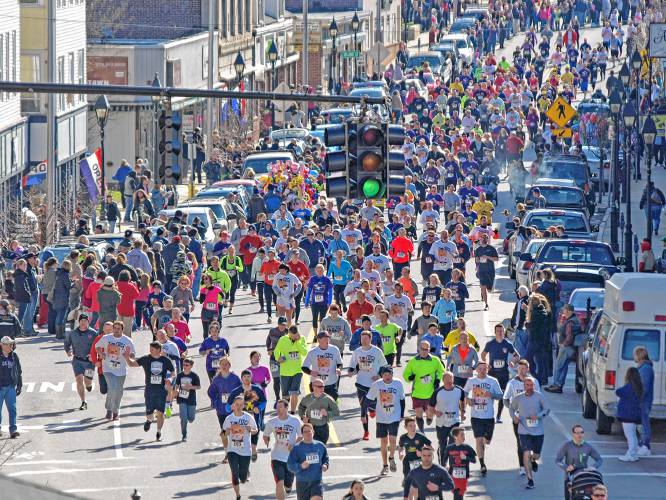 The Boston Marathon is New England’s most widely viewed sporting event, but with half a million spectators, where does one actually go to cheer on the runners?
Well, a few of the more popular spots – Hopkinton’s start to the race, Newton’s Heartbreak Hill, and both Boston’s Kenmore and Copley Square – are a given to be crowded, which isn’t by any means a reason not to attend; if you’re looking for action, cheers, and a wave of emotion, each of those locations will suffice!
Here on MassFinds, though, we’re hoping to bring a few of the lesser-known spots along the 26.2-mile stretch to light.
First and foremost, if you’re hoping for a great day of spectating, you’re going to have to start the day early. Roads generally close in the Hopkinton area around 7:00 AM, in the Newton area around 9:00 AM, and from Brookline inbound around 9:30 AM. 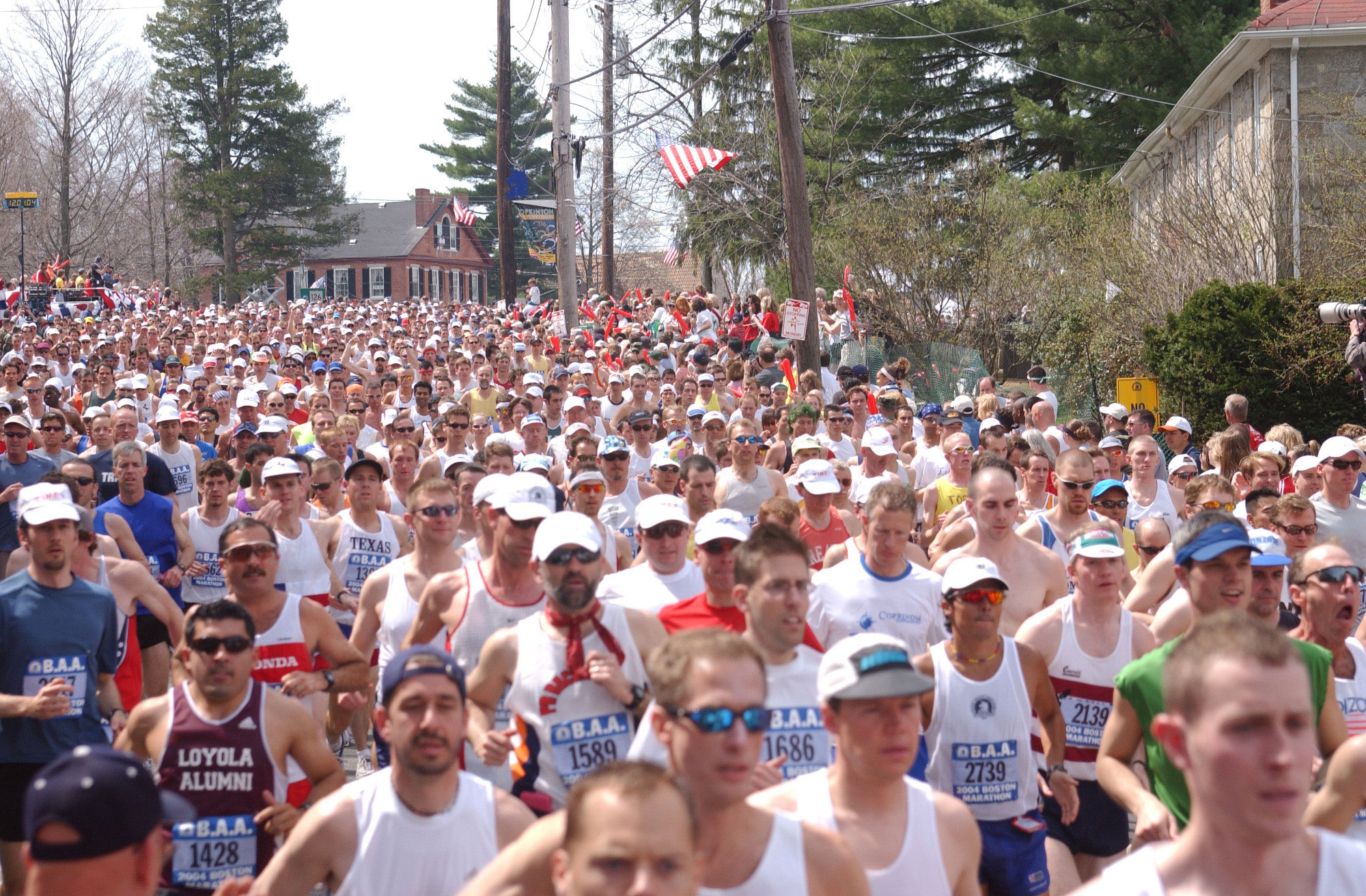 The reality is that no spot is really a bad spot, but some of the lesser-known tips can certainly go a long way.
From start to finish…
Hopkinton: The start of the race – at the intersection of Main Street, Grove Street, and Cedar Street along Route 135 – is going to be packed; there is no doubt. But, don’t let that deter you from catching a glimpse of the runners in their freshest state! If you head down the marathon’s route, roughly about a mile from the races start, you’ll come to the Frankland Road area – chances are, you’ll find a little bit more breathing room, and catch the runners as they take off downhill from the starting line.
Ashland: The center of town will be a packed house, but if you work your way over to far end of Ashland State Park along Route 135 towards Indian Spring Road, you’ll certainly find it a bit more spacious.
Framingham: Around 6-miles into the race, if you work your way over to Waverly Street, near the commuter rail station, you’ll find that the crowd begins to thin.
Natick: Along Route 135, you’ll find the Natick Common, which will most likely be crowded, but again, if you play your cards right and get there slightly early – you’ll be destined to grab a great spot.
Wellesley: Marking just about the halfway point in the race, the lively Wellesley College students will be in full action – so, Wellesley’s business district is set to be yet another loud and active spot, but if you’re seeking more of a relaxed environment, work your way closer to Town Hall. From here, you can set up in Hunnewell Park, which is on a hill, or on Washington Street located in Wellesley Hills.
Newton: At the 16-mile mark, in Newton Lower Falls, the Newton Fire Station marks the hard right that racers take as they turn from Route 16 onto Commonwealth Avenue. Within this area, there is generally a notable amount of room to set up shop.
About a mile and a half down the route from the Newton Fire Station, though, Commonwealth Avenue opens up to an expanse of green space. Whether you’re sitting on the front lawn of Newton City Hall, or at one of the popular Commonwealth Avenue intersections – Washington Street, Chestnut Street, Centre Street – you are bound to find a great spot to cheer on the runners as they race by.
Chestnut Hill: Here you are bound to encounter an abundance of Boston College students – so, again, prepare yourself. But, fortunately, the Chestnut Hill area consists of wide roads with open green space; perfect for giving the runners an added boost with an array of loud cheers.
Brighton: Cleveland Circle is a great choice for those that are looking to make a full day out of their marathon experience. Along Chestnut Hill Avenue, which is a two-block strip that transitions the runners from Commonwealth Avenue to Beacon Street, you’ll find that there is ample room to catch sight of the runners, along with a collection of great spots to grab a bite to eat.
Also, Cleveland Circle stands as a great spot to catch the push-rim wheelchair division. Due to the fact that Chestnut Hill Avenue is downhill, the racers generally pick up a great deal of speed as they whiz by onto Beacon Street.
With easy access to three MBTA Green Lines (B, C, & D), Cleveland Circle is a great way to catch some action close to the city, but not too close.
Brookline: Continuing down Beacon Street into Brookline, you’ll come to the not-so-crowded Washington Square, and if the weather is permitting, you can enjoy a nice ice cream cone from Emack & Bolio’s. 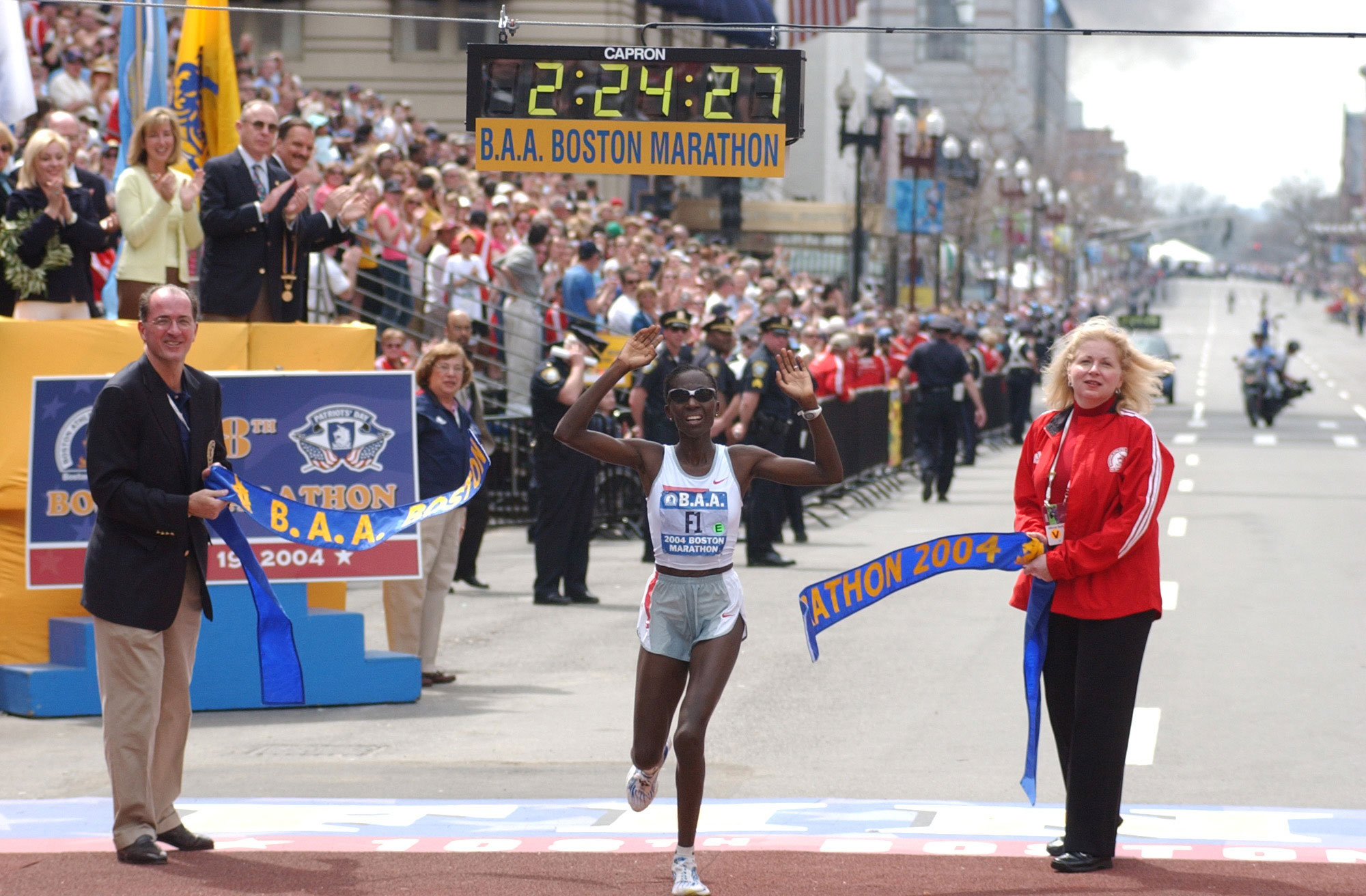 There you have it, Massachusetts. Patriot’s Day is certainly an exciting one; bring your cheers, experience the local festivities, and celebrate the familiar faces of inspiration, it is certainly a day of enjoyment.