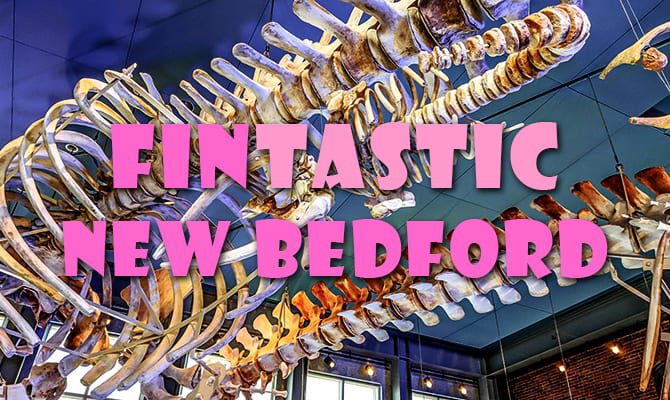 Spend some time on the Massachusetts Whale Trail and you’ll no doubt wash ashore in the historic town of New Bedford. Back in the days of top hats and monocles (ahem, the early 19th century), New Bedford, Massachusetts was the world’s #1 whaling port (and, ergo, the world’s wealthiest city). Besides that, Herman Melville himself shipped out from New Bedford on the whaling ship Acushnet in 1841 and from his experiences came the novel Moby Dick—so yeah, whales are kind of a big deal here.
Everything about this adorable port city screams, “WaaaoaOOOoooAAaoaoo.” What? You don’t speak whale? The city’s rich maritime history and its contributions to American literary heritage bring you a town where there’s a whale of a good time around every corner. And, quite literally, an actual whale too (this is not an exaggeration). Follow these three steps for the perfect whale-themed day out in New Bedford, MA and never forget to seas the day! 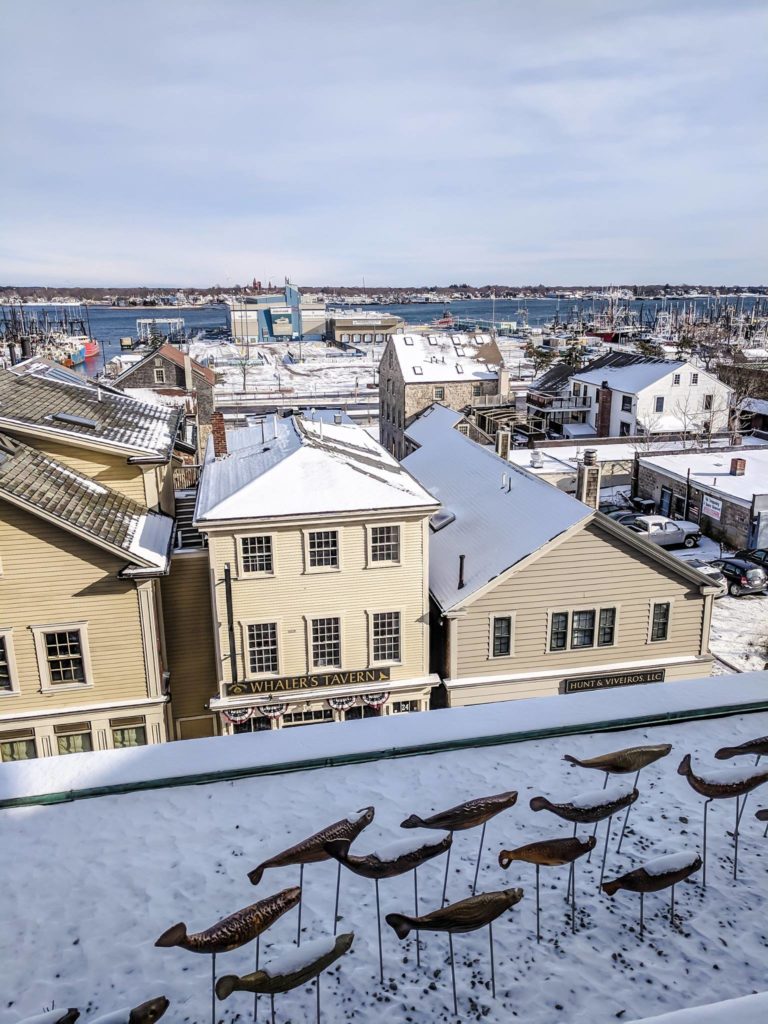 Even on frigid days, you can’t pass up a view like this from the museum’s observation deck, photo credit: Ashley Smith, mywanderlustylife.com

The New Bedford Whaling Museum was established in 1903 with the porpoise of preserving the rich history of the area. It showcases everything from artifacts related to the once thriving whaling industry to whale skeletons and replica ships to arts and crafts and the whale conservation and research of today. They offer free guided tours with admission and the amount of both information and enthusiasm is staggering. Some of the museum’s highlights and must-sees include:
Whale skeletons of four different species | The New Bedford Whaling Museum displays the completely intact skeletons of a sperm whale (it only has bottom teeth!), a humpback whale (appropriately named Quasimodo), a blue whale (the world’s largest whale species), and the highly endangered (and pregnant) North Atlantic right whale whose fetal skeleton is also displayed. So, okay, technically that’s five.
You can examine every bone in the whales’ bodies (don’t miss the heart-shaped sternum), feel a baleen plate with your very own hands, and marvel at the massive size of these mammals that could totally swallow you whole and still be hungry for like a million fish. 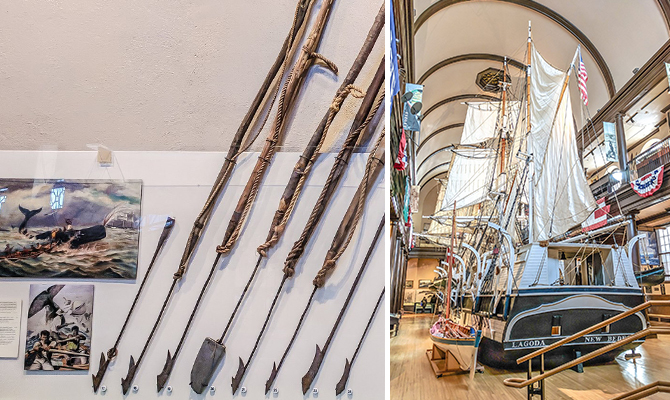 The world’s largest ship model | Inside the museum is a model of the whaling ship Lagoda, the largest model ship in existence, in fact. The Lagoda model was built in 1916 at an impressive ½ scale and constructed inside the museum, technically making this a ship in a very weird-shaped bottle. The model ship dominates one of the museum’s largest galleries and you’re welcome to climb aboard to better imagine what life was like in what must have been a seriously stinky profession.
Arts and crafts | One of the most fascinating aspects of the museum is the collection of arts and crafts created by increasingly bored sailors. Days aboard a whaling ship were long and action was often scarce forcing whalers to find other ways to krill time with whatever was lying around, i.e. whale parts. An entire gallery is dedicated to not only paintings and sketches but also whale bone and tooth carvings, shell relief carvings, and the production of tooth tools, ivory instruments, and various other scrimshaw thingamajigs. 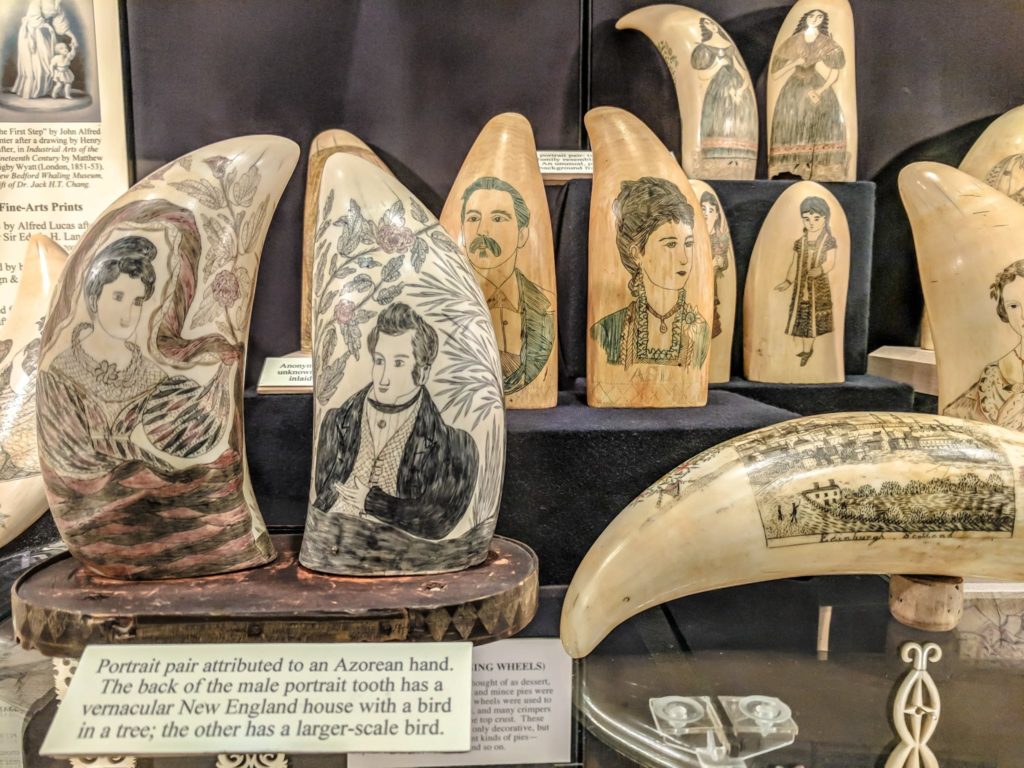 The view | Head to the upper level of the museum to the observation deck for spectacular panoramic views of the town and New Bedford Harbor. You’re shore to enjoy the view from up here but don’t get tide down because water you going to do next? It’s feeding time!

Step 2 | Lunch at the Black Whale

Nope, that’s not a misprint. The rest of New Bedford may be all about that famous white whale but lunch at The Black Whale is actually where it’s at. Score one for the orcas! Located right on the New Bedford waterfront is some of the best seafood in New England, skipper’s honor. Hit up the raw bar, down some award-winning chowdah, snag some of that fresh, fresh fish, and wash it all down with a mermaid cosmo*. How seriously you play the role of Captain dining on the high seas is entirely up to you.
*No mermaids are harmed in the making of this cocktail. 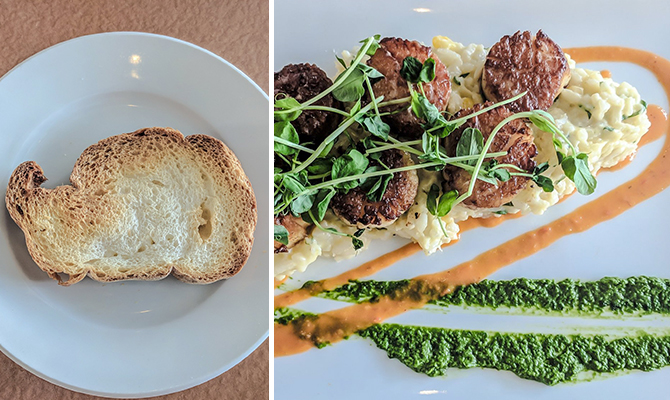 Lunch with a WHALE-SHAPED toast (honestly, what are the odds???), photo credit: Ashley Smith, mywanderlustylife.com

Because even your ales should be whales! Just minutes from lunch is the Moby Dick Brewing Company and all their local craft beer goodness. Not to pier-pressure you, but maybe order a beer flight (served on a whale’s tail, naturally) and fill it with such brews as Ishm-ale, Sailor’s Delirium double IPA, and Stove Boat stout. Maybe one day they’ll make some batches called I’m Trappist On This Boat or It’s Whaling Saison—here’s hoping! 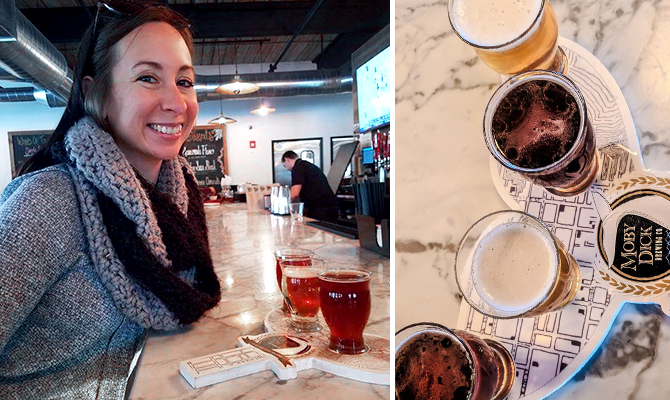 Ashley Smith is the travel writer and photographer behind My Wanderlusty Life, a blog dedicated to helping busy wanderlusters travel the world on a time-budget. Though based in the Boston area, she covers a wide world of quick trip tips and itineraries for real travelers, lighthearted humor (so many puns), and personal experiences.