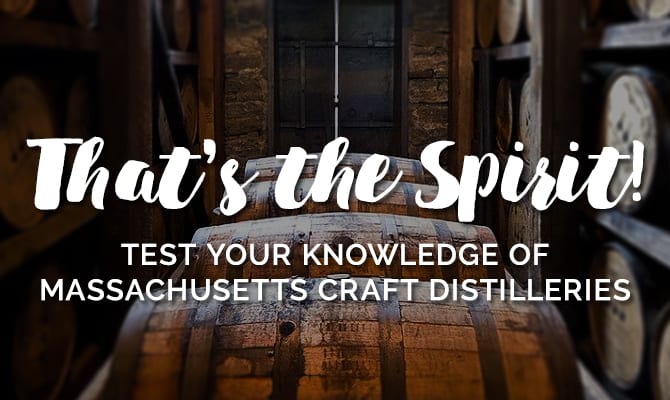 With a long rooted tradition in distilling, Massachusetts has emerged as a feature destination for craft beverage enthusiasts and culinary tourists. Craft distillers in Massachusetts produce a variety of spirits – including rum, whiskey, vodka, and more – so this really is the place to try it all!
And maybe you have – tried it all, that is. You might even consider yourself a craft beverage expert. Do your friends roll their eyes when you start your monologue about the art of tasting, the nuances of flavor, or history of producers and how so-and-so has grown their own ingredients…
Or maybe you’re more of a novice, looking to learn more and experience what Massachusetts has to offer in distilled spirits. Inquisitive minds, read on!
This is, however, a challenge to the so-called experts, to put that know-how to the test with five Q&As about Massachusetts spirits and distilleries. Do you have what it takes to be considered a Massachusetts Spirits + Distillery expert?

Captured In A Bottle from Martin Albert on Vimeo.

How many distilleries are there in Massachusetts?

The current number of distilleries in the Bay State is…drum roll please… 18! Located throughout the state, you’re never hard pressed to find a craft distillery within a quick drive, train, or ferry ride. With only two Massachusetts craft distillers operating in 2005, the growth of the industry parallels the rising popularity of craft beverages, unique flavors, and locally grown/produced goods.

How old is the oldest working commercial distillery in Massachusetts?

Spirits and Massachusetts have been friends since pre-Revolutionary War times, and you’d be right to think there’s an operating distillery that dates back quite a bit, but you’d probably be off by a hundred years or so. Only an expert would know that the oldest operating commercial distillery opened in 1997; Triple Eight Distillery. Widely recognized as an industry leader, Triple Eight Distillery churns out an assortment of spirits including liqueur, vodka, bourbon, and gin from their facility on Nantucket.

What are the top three spirits produced by Massachusetts distilleries?

Gin, rum, and whiskey are the top three spirits produced by Massachusetts distilleries, with vodka running a close fourth (per the 2015 Massachusetts Distilleries Economic Snapshot). Besides commonly used ingredients such as molasses, rye, and wheat, distilleries also source locally for fruits and herbs. Damnation Alley Distillery in Belmont, for example, works with four local farms to produce their whiskeys and vodkas from fresh ingredients such as wheat, grains, and even sea salt. Berkshire Mountain Distillers, one of the founders of the craft distiller movement, even grow a number of their own ingredients. 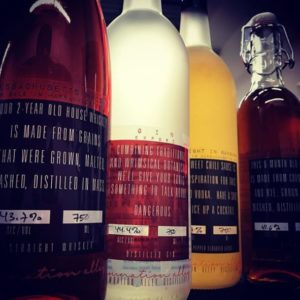 What is the main ingredient in rum?

You might be leaning toward something sweet, but did you guess molasses? Trivial as it seems, there’s a reason to focus on the viscous ingredient. John Adams credited molasses with helping pave the way for America’s freedom from the crown. In the 18th century, molasses was a big money maker for the Bay State. Rum was popular, and Boston was one of the country’s leading exporters. Misfortune befell in the Commonwealth in 1919 when a molasses tank ruptured, sending a tidal wave of molasses through Boston’s North End, killing 21 people and leaving 150+ injured. Fast forward to the present, and distillers have rekindled the tradition for rum making. Bully Boy and GrandTen use blackstrap molasses to produce low-sugar rum; others, like Privateer use Grade-A molasses to produce rum with a slightly more sugary flavor. There has been heavy debate over which resembles the most authentic taste of the historical style. We’ll leave it to your discerning taste buds to test both styles and decide your preference.

Can you name Boston’s first distillery?

Have we stumped you? Hint: it was mentioned in a previous question. Now you guessed it – Bully Boy Distillers in Roxbury, MA! Bully Boy was founded in 2010 by the Willis brothers out of a lifelong obsession with spirits. The distilling business is an offshoot from the family farm business, giving Bully Boy a great advantage in being able to produce from the farm’s naturally-grown ingredients. Focusing on quality over quantity, Bully Boy produces small batch spirits that live up to their philosophy and standards.

Did you get them all right? In the end, the real win is visiting Massachusetts and sampling the gamut. Taste, tour, and ask questions. Producers are an insightful and passionate lot, eager to offer background on the process and share their stories. Take your pick of Massachusetts distillers and enjoy!