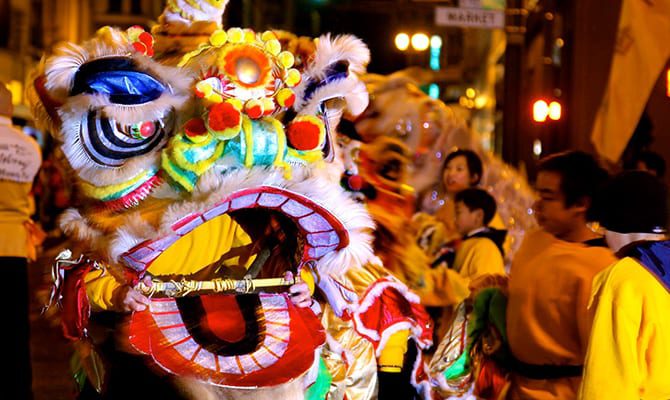 With January’s New Year’s celebrations behind us, Massachusetts residents and visitors are preparing to celebrate Lunar New Year this month. It’s a significant holiday for more than 350,000 Asian-Americans living in the Bay State, and for billions of Asians around the world.
Often referred to as Chinese New Year, the Vietnamese community calls its Lunar Year celebration Tết, while South Koreans call theirs Wondan. The celebration goes back over 2,000 years to the Eastern Han Dynasty, when ancient Chinese developed Chinese Zodiac Signs to mark the New Year, using a 12 year cycle of deliberately-chosen animals. 2018 is the Year of the Dog.

The centerpiece of the celebration is the lion dance – a traditional performance in Asian culture in which performers dressed in elaborate costumes mimic a lion’s movements to bring good luck and fortune for the coming year.
Here are a dozen Lunar New Year celebrations to enjoy across the Bay State!

Chinese New Year Celebration at Harvard Square
Harvard Square
Zoe Lin is studying for her M.S. in Mass Communication at Boston University and is an intern at the Massachusetts Office of Travel & Tourism.
Feature image source: Lion Dance Costume

One photo/video (15 sec max) entry qualifies for a chance to win the getaway. Winners will be selected by most votes on website and will be excluded from future drawings for 12 months. Packages do not include transportation unless specifically noted. Entrants must be 25 years of age or older; one entry per household. Taxes and gratuities not included. No cash value; offers subject to availability. Prize is not transferable. Additional restrictions and blackout dates may apply to some packages. Employees, and their families, of the Massachusetts Office of Travel and Tourism (MOTT) and its vendors are not eligible. Employees of the Commonwealth of Massachusetts and their families are not eligible. Void where prohibited by law. All photos may be used by MOTT and will be included in the state agency photo bank. Prize package is valid for one year from issue date.