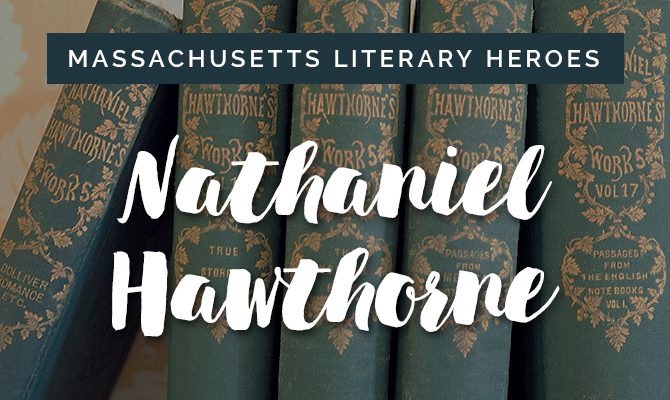 Massachusetts is proud to have served as home and inspiration to some of the greatest American writers of all time. Fostering, encouraging, and promoting talent has long been a part of the culture of the Commonwealth. In this series dubbed Literary Heroes, we connect Massachusetts writers’ works with notable sites and locations, unveiling their significance then and now. In this edition we take a look at one of the most critically and commercially successful authors of the nineteenth century, Nathaniel Hawthorne.

Nathaniel Hawthorne wrote two of the most popular American books of the time – The Scarlet Letter and The House of the Seven Gables. The Scarlet Letter was an almost immediate best-seller, selling more than 2,500 copies in ten days. American romantic poet and critic James Russell Lowell, considers The House of the Seven Gables to be Hawthorne’s most valuable contribution to New England literature. These two novels were written in Salem and Lenox, and have been adapted countless occasions since their original publication.

The House of the Seven Gables

Hawthorne also published several romantic volumes, short stories, and philosophical commentaries in his lifetime, including Mosses from an Old Manse. This collection was positively reviewed by author Herman Melville, and helped spark a friendship between the two that would span a decade. Additional publications include Tanglewood Tales, a collection of short stories for children, The Blithedale Romance, written after living in The Berkshires, and Twice-Told Tales, which were his earliest published works.

Upon graduating from Bowdoin College, Nathanial Hawthorne moved to the Beacon Hill neighborhood of Boston. While there, he was an editor of the American Magazine of Useful and Entertaining Knowledge, and published his first collection of short stories. His Boston home is a stop on the Hub of Literary America walking tour. Hawthorne did not stay in Beacon Hill for long, however; he soon joined the visionary community of Brook Farm with his wife Sophia. 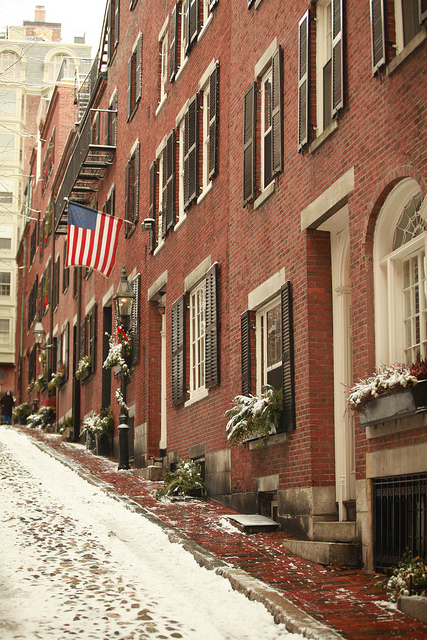 Beacon Hill in Boston, where Hawthorne got his start

Hawthorne and Sophia left Brook Farm after a short period and moved to the transcendentalist haven of Concord, MA. Hawthorne’s first home in Concord was The Old Manse, where he wrote Mosses from an Old Manse, published The Blithedale Romance, and began his friendship with author Herman Melville. The Old Manse is now a museum managed by The Trustees of Reservations, and is open to the public for tours. Etchings in windowpanes are a treasured reminder of Hawthorne’s time at the picturesque property. A ten minute drive away is The Wayside, the second home of Nathaniel Hawthorne in Concord, where the Alcott family previously lived. 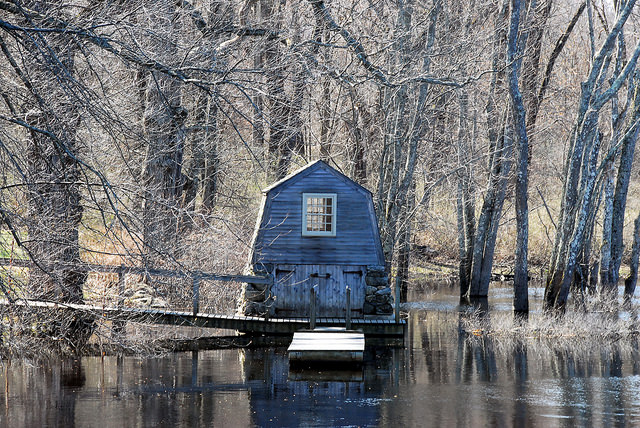 The Boathouse at the Old Manse

In between residencies in Concord, Nathaniel Hawthorne and his family lived in Salem and Lenox, respectively. While in Salem, Hawthorne wrote The Scarlet Letter, one of the first mass-produced books in America. Not long after, Hawthorne moved to the Berkshires, where he wrote The House of the Seven Gables, inspired by the Hawthorne family home. The actual House of Seven Gables* is open to the public. There is a replica of Nathaniel Hawthorne’s birth site on the property as well. A reproduction of Hawthorne’s home in Lenox (The Little Red House) is located on the Tanglewood property, and can be hiked to on the Melville Trail, but is not open to the public.
Nathaniel Hawthorne is buried at Authors Ridge in Sleepy Hollow Cemetery in Concord, MA surrounded by his family, and other prominent transcendentalist authors, poets, and philosophers. 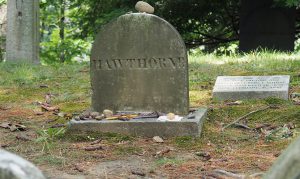 As one of the leading transcendentalist authors and philosophers of his time, Nathaniel Hawthorne was friends with Ralph Waldo Emerson, Henry David Thoreau, and Bronson Alcott. Hawthorne was also friends with author Herman Melville, who dedicated Moby Dick to him.
*The House of the Seven Gables is celebrating its 350th anniversary in 2018, commemorated with several special events happening throughout the year. Check their website for event details!