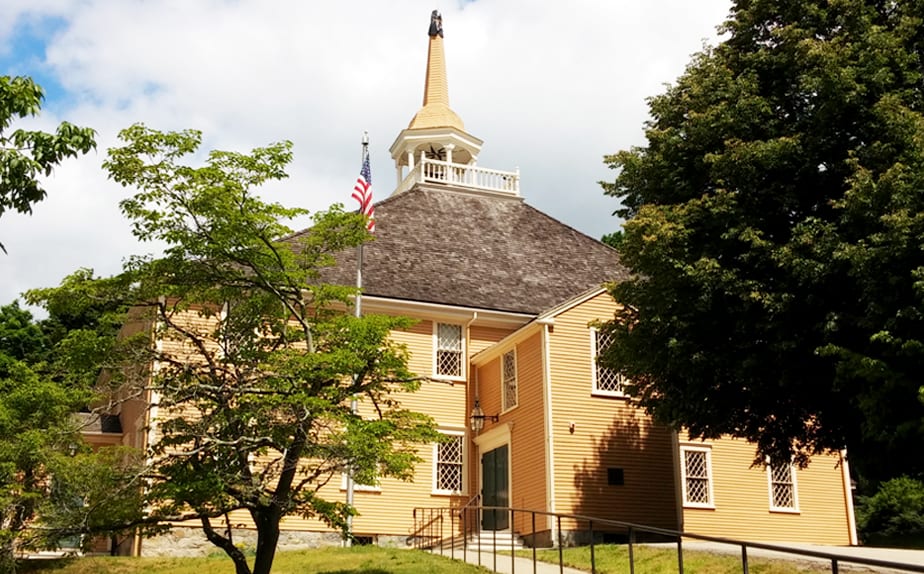 Posted by Howard A. Kramer, guest blogger of The Complete Pilgrim

New England was one of the first places in America to be substantially settled by Europeans; many of the earliest settlers in the area were deeply religious people, often seeking freedom of worship. Therefore, it is not surprising that this region is dotted with some of the oldest and most historic religious sites in the United States, and nowhere is this truer than in Eastern Massachusetts.
Many visitors to Eastern Massachusetts never travel beyond Boston, and indeed there is a wealth of historic churches to be found along the city’s famous Freedom Trail.  However, travelers who venture beyond historic Boston will find themselves rewarded with a pilgrimage experience almost unmatched elsewhere in the United States.  From New Bedford to Newburyport, the churches of Eastern Massachusetts are not likely to disappoint.
Beginning south of Boston, the stretch of Massachusetts from the city to Cape Cod, packs in dozens of churches that date as far back as the Colonial era, including two that were built in the 17th century.  Many are worth a visit, with at least five standouts that are not to be missed.
The city of New Bedford, approximately forty miles south of Boston, is a great place to start a tour of the region.  New Bedford, a port that played a major role in the early American whaling industry, is home to Seamen’s Bethel Chapel (built 1832, seamensbethel.org).  This church, which has served the local maritime community for nearly two centuries, is closely associated with Herman Melville’s immortal novel, Moby-Dick.  Fans of the book come to Seamen’s Bethel to marvel at the pulpit, built to look like a ship’s bow, and sit in the pew where Melville once sat. 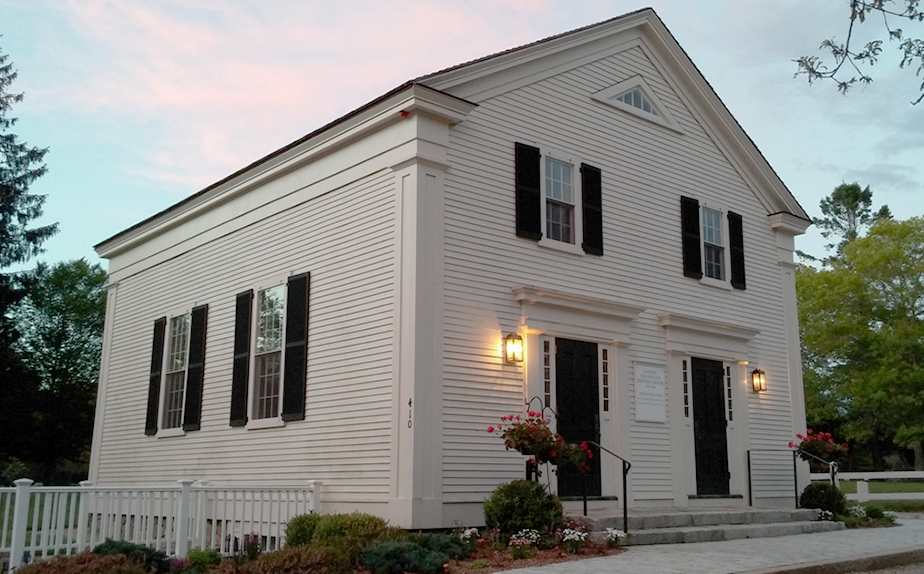 About an hour’s drive through Buzzard’s Bay brings visitors to Cape Cod and the town of Mashpee.  Tucked away off the beaten path is the magnificently preserved Old Indian Meeting House (built 1684, mashpeewampanoagtribe-nsn.gov/meetinghouse).  This church enjoys several distinctions.  It is the seventh oldest intact church in the United States, the oldest surviving Native American church, and one of the oldest churches that is still actively Congregational.
Heading north from Mashpee about a half an hour along Cape Cod Bay is one of America’s definitive pilgrimages for several reasons. The first being, the charming town of Plymouth, home to the original settlement of Puritan Separatists established in 1620. Plymouth boasts the oldest continually active congregation in the United States (the congregation was actually formed in England in 1606, predating the Plymouth Colony by 14 years).  While the First Parish Church in Plymouth (built 1899, firstparishplymouthuu.org) is only a little over a century old, Burial Hill behind the church is the burial ground for a number of the original pilgrim fathers, including minister William Brewster and governor William Bradford.
Continuing north another 45 minutes or so towards Boston, travelers come to the village of Hingham and the Old Ship Church (built 1861, oldshipchurch.org).  This stunning structure is the oldest church in New England and the fifth oldest in the United States.  America’s last surviving 17th century Puritan meetinghouse, its name comes from the church’s interior superstructure, which resembles that of an old wooden ship.
Just a few miles west of Hingham is the city of Quincy, and one of the greatest religious treasures in New England: The United First Parish Church (built 1828, ufpc.org).  This stately church in the heart of the city is home to the tombs of two presidents of the United States and their wives.  Both John Adams and his son John Quincy Adams are buried in a crypt beneath the church, along with Abigail Adams and Louisa Catherine Adams.  This is the only place in the United States where two presidents are buried in the same location.  The congregation maintains the church and the crypt by working diligently to keep the site open and accessible to the public. 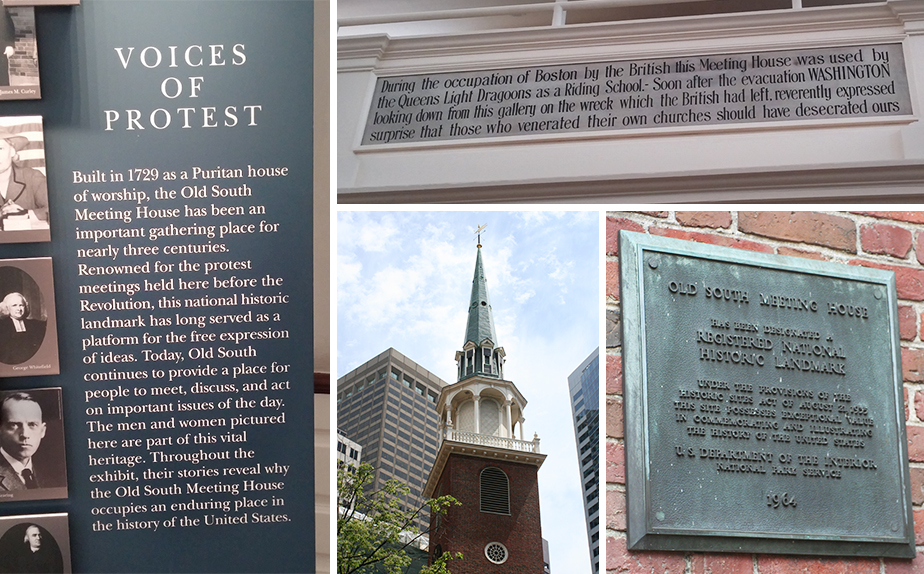 Four of Boston’s most important churches are located along the city’s famous Freedom Trail, a walking tour marked by red bricks that connects sixteen official historic sites and a number of unofficial ones on a stroll that is usually several hours.  The first (if starting in Charlestown) and hands-down most famous is the Old North Church (built 1723, oldnorth.com).  The Old North Church has gone down in American history as the site where patriots hung two lanterns from the bell tower on the night of April 18, 1775, setting off Paul Revere’s famous ride warning that the British were coming by sea.  Sadly, the original lanterns are no longer here, but this does not deter hordes of history pilgrims from visiting.
Next along the Freedom Trail is one of its unofficial sites; St. Stephen’s Church (built 1804, ststephensbos.org). St. Stephen’s Church has a couple claims to fame.  First and foremost, it is one of few surviving churches designed by Charles Bulfinch, arguably the most famous American architect of the early 1800’s.  St. Stephen’s served as one of Boston’s most prominent Catholic churches for well over a century.  Rose Fitzgerald Kennedy, mother of President John F. Kennedy, was baptized here in 1890.
Less famous, but perhaps more significant than the Old North Church, is the Old South Meeting House (1729, www.osmh.org).  The Old South Meeting House was the site of many anti-British gatherings led by some of Boston’s most vocal patriotic leaders.  In 1773, Samuel Adams incited a huge crowd here to attack British merchant ships in the harbor, leading to the incident now known as the Boston Tea Party.  Exhibits detailing the meetinghouse’s rich history can be found inside the building. 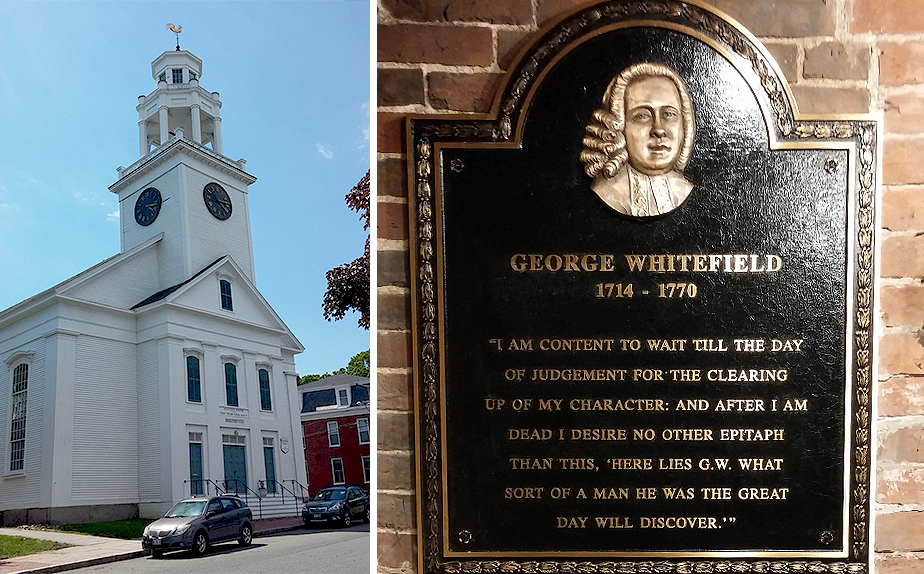 A short walk from the Old South meeting House is King’s Chapel (built 1749, www.kings-chapel.org).  Home to one of New England’s oldest congregations, King’s Chapel stands on a site that has been occupied by churches since the 17th century.  It is perhaps most popular due to the neighboring graveyard, the King’s Chapel Burying Ground, one of the oldest cemeteries in America.  Its burials include John Winthrop, the first governor of Massachusetts, and William Dawes, one of the men who joined Paul Revere in his famous midnight ride.
An hour north of Boston is the last, but certainly not least, destination of this tour: the Old South Presbyterian Church (built 1756, oldsouthnbpt.org).  This unassuming church in the charming town of Newburyport is home to not one but two absolutely magnificent religious treasures.  The first is an original church bell cast by none other than Paul Revere (there are only four such bells still in existence), still in the tower and still in use.  The other, hidden away in a crypt beneath the altar, is the tomb of George Whitefield, one of the defining ministers of the Great Awakening movement of the 18th century.  Lucky visitors may be fortunate enough to have a deacon show them both.
Feature photo: Old Ship Church