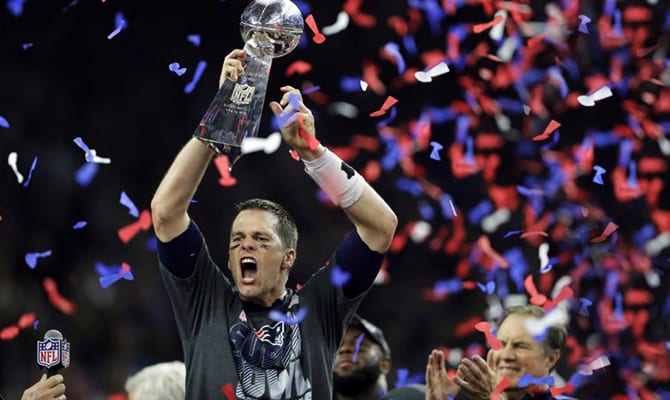 The debate is over – Thomas Edward Patrick Brady Jr. is the greatest NFL quarterback of all time.

We might be a little biased, though. We’re part of what’s called Patriots Nation, a regional cheering squad comprised of Massachusetts, Maine, Vermont, New Hampshire, Connecticut and Rhode Island, and home of the now 5-time Super Bowl Champion New England Patriots!
New Englanders have been spoiled by their professional sports teams going on two decades now, from the Red Sox to the Celtics, but the New England Patriots have been the most consistent team, competing for a championship every year since their first Super Bowl win in 2001. And on the field there has been one constant: TB12.
Last night, on the biggest stage, Brady cemented his place in football lore as the undeniable G.O.A.T., completing 43 out of 62 passes for a record of 466 yards, 2 touchdowns and 1 interception to lead the Patriots past what seemed to be an insurmountable 25-point deficit to defeat the Atlanta Falcons in a 34-28 overtime win. It was the biggest comeback in Super Bowl history. Brady was also named Super Bowl MVP for the 4th time in his career.

Brady is now the only NFL quarterback to win five Super Bowls. He’s played in seven.

In anticipation of the game, fans were out in full force at the send-off rally in Foxboro, MA one week ago. Patriots Nation remained a source of inspiration for the team – this year perhaps more than any other – as the organization battled through much adversity during the season.
Looking back, Brady began the season serving a 4-game suspension and backup QB Jimmy Garoppolo was the next man up, performing well in both of his starts until he went down with a shoulder injury in week two. Third-string rookie QB Jacoby Brissett started in week three and led the Pats to a win but injured the thumb on his throwing hand. The Pats also lost arguably their best offensive weapon for the season in Tight End Rob Gronkowski when he went down with a back injury in week twelve.
Despite these challenges the fans packed into Gillette Stadium and sports bars far and wide to rally behind their team. The Patriots went 3-1 in the four games without Brady and when he returned, they went on a four-game winning streak.
The Patriots were perfect road-warriors going 8-0 in opponent’s backyards and boasted the league’s stingiest scoring defense. They finished the year 14-2, capturing the AFC East Division title for the 8th straight year.

As the number one seed in the playoffs the Pats defeated the Houston Texans and the Pittsburgh Steelers on route to their record 9th Super Bowl appearance.

The Atlanta Falcons dominated the first half of Super Bowl LI and lead 28-3 but they would not score again. In the second half the Patriots never gave up, as Brady counted heavily on wide receivers Malcolm Mitchell, Chris Hogan and Danny Amendola. Two of the most miraculous plays were the sack by linebacker Dont’a Hightower on Falcons QB, Matt Ryan and an unbelievable juggling catch by receiver Julian Edelman between three Falcons defenders.
Brady threw both of his touchdowns in the fourth quarter and the Patriots executed on their two point conversion attempts. The Patriots won the overtime coin toss and Brady led the team down the field, capping off an 8-play, 75 yard drive by handing the ball off to running back James White, who punched it in for the win.
At the podium and in post-game interviews the soon-to-be 40-year-old Tom Brady was visibly reflective, as it had been an emotional week and season for number 12 in particular. But as he always seems to do, Brady found a way to do his job on the field and now has ended any doubt about his position as the greatest ever. His success was not always foreseen by analysts, though.

Brady was the 199th pick in the sixth round of the 2000 NFL draft. Six quarterbacks were drafted before him. ESPN documented Brady’s uncertainty of his future at the time, but still, he never lacked confidence.

Patriots Owner Robert Kraft said Brady introduced himself and said drafting him was the best decision the organization ever made. Five Lombardi trophies later, we think he may have a point.
Football season may be over, but we have you covered if you can’t get enough sports in the Commonwealth. The Massachusetts Sports Marketing Office has issued its calendar of top sporting events in 2017. Among them, the 2017 NCAA Men’s and Women’s Lacrosse Championships to be hosted at Gillette Stadium. This marks the first time both events will be played at the same venue.
For year round information on sporting events, visit www.masportsoffice.com and check out more event listings here.
Feature photo source: Darron Cummings / AP, Boston.com