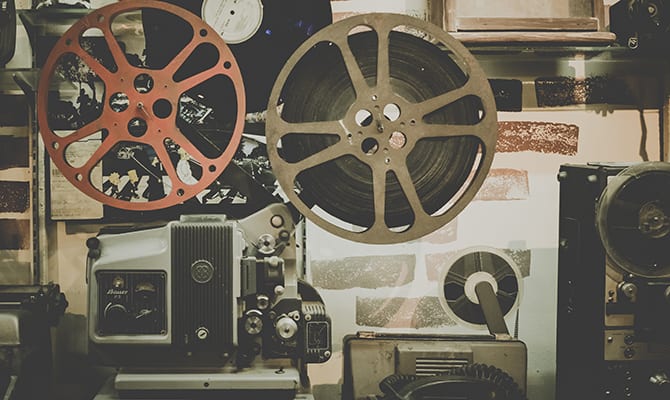 Classic Sci-Fi, Theater in HD, a Halloween Double Feature, and more are featured at Amherst Cinema!
October is brimming with special events at Amherst Cinema in addition to first-run films and theater and dance programs in HD on all four screens. Order a bag of our famous popcorn and a glass of wine and enjoy these film gems on the big screen! For current releases, visit amherstcinema.org or ask our friendly box office staff.

Photography: Finding Vivian Maier on Thurs, Oct 13 at 7pm | Now considered one of the 20th century’s greatest street photographers, Vivian Maier was a mysterious nanny who secretly took over 100,000 photographs that went unseen during her lifetime.
Foodies: The Lunchbox on Mon, Oct 17 at 7pm | When housewife Ila’s lovingly prepared lunchbox is mistakenly delivered to another office worker in Mumbai instead of her husband, thus begins an exchange of lunchbox notes between Ila and soon-to-be retiree Saajan, the recipient of the lunchbox.
Film School: Classic 1950s Science Fiction Movies | Film expert Nina Kleinberg returns to Amherst Cinema to explore three classics of 1950s science fiction:

National Theatre Live in HD: The Deep Blue Sea on Thurs, Oct 20 at 7pm | When Hester Collyer is found by her neighbors in the aftermath of a failed suicide attempt, the story of her tempestuous affair with a former RAF pilot and the breakdown of her marriage to a High Court judge begins to emerge.
Cult film: Multiple Maniacs, Fri October 21, 9:45pm | John Waters’ gloriously grotesque, unavailable-for-decades second feature comes to theaters at long last, replete with all manner of depravity, from robbery to murder to one of cinema’s most memorably blasphemous moments.
National Theatre Live in HD: Frankenstein on Tues, Oct 25 at 7pm; Sat, Oct 29 at 12:30pm | Directed by Academy Award®-winner Danny Boyle, the play features Benedict Cumberbatch and Jonny Lee Miller alternating roles as Victor Frankenstein and his creation.
Science on Screen: Embrace of the Serpent on Wed, Oct 26 at 7pm | The story of the relationship between an Amazonian shaman, the last survivor of his people, and two scientists who, over the course of 40 years, search the Amazon for a sacred healing plant. With Amherst College medical anthropologist Dr. Chris Dole introducing the film.
Horror!: Halloween Scare-a-Thon Double Feature on Thurs, Oct 27 at 7pm:

Grab dinner and a movie!

The Pioneer Valley is brimming with delicious food, inviting restaurants, and a lively bar scene so make a night of it! Before or after visiting Amherst Cinema, stop at one of many locally-owned eateries for dinner, dessert, or a drink (or all three!).
For a list of area restaurants, check out the Amherst Business Improvement District, the Amherst Chamber of Commerce, and Northampton Chamber of Commerce.