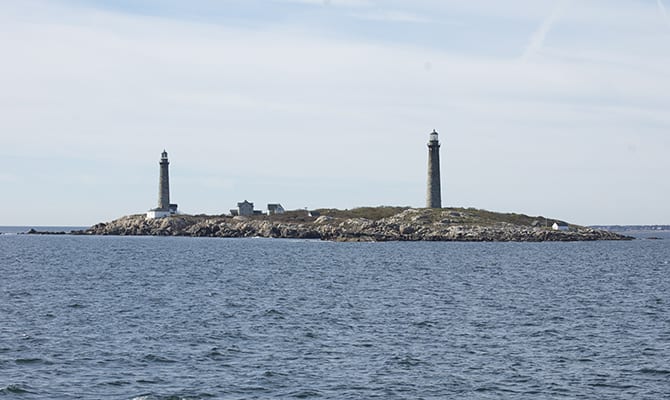 Annisquam Light- Gloucester
Location: Wigwam Point, Northern end of Annisquam River, Ipswich Bay
Visiting: No public access to interior of lighthouse
Annisquam Harbor Light Station, formerly known as Wigwam Point, was first established in 1801 and is now one of the oldest light stations in Massachusetts. The original wooden octagonal tower was replaced around 1897 by the existing brick tower. The site includes elements of the original light station complex (completed by 1814), such as the keeper’s house and an oil house. An elevated wooden walkway leads to the 41-foot tall tower, which rests on a stone foundation. An enclosed brick passageway provides access to the tower. 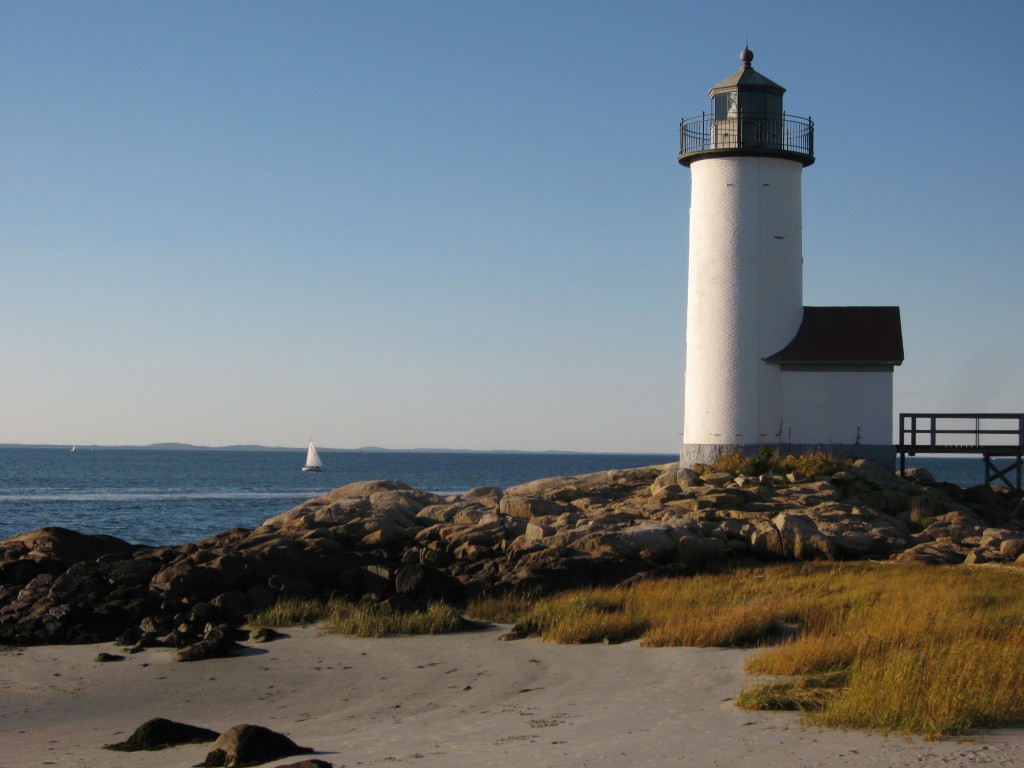 Derby Wharf Light- Salem
Location: Derby Wharf
Visiting: No public access to interior of lighthouse
Derby Wharf Light Station has aided navigation in Salem Harbor since it was first lit in 1871. The Derby Wharf Light, along with the Hospital Point Light in Beverly, Massachusetts, and Fort Pickering Light Station on Winter Island in Salem, were designed to “mark the main channel leading into this anchorage, with the view to its becoming a harbor of refuge which may be safely entered at any time,” in the words of the 1870 report of the lighthouse board to the U.S. Treasury. The lighthouse is located on the end of Derby Wharf. Derby Wharf Light is about twelve feet square and about 20 feet high to the top of the cupola.

Eastern Point Light- Gloucester
Location: East Side of Gloucester Harbor Entrance
Visiting: No public access to interior of lighthouse
Eastern Point Light was originally planned in 1829 and was erected by 1832 on the east side of the Gloucester Harbor entrance. It was first lit on January 1, 1832. The tower was rebuilt in 1848 and again in 1890. The third and current conical brick tower stands 36 feet tall. The lighthouse has an attached two-story keeper’s quarters, built in 1879. Its white light is visible for 20 nautical miles. It was automated by September 1985. 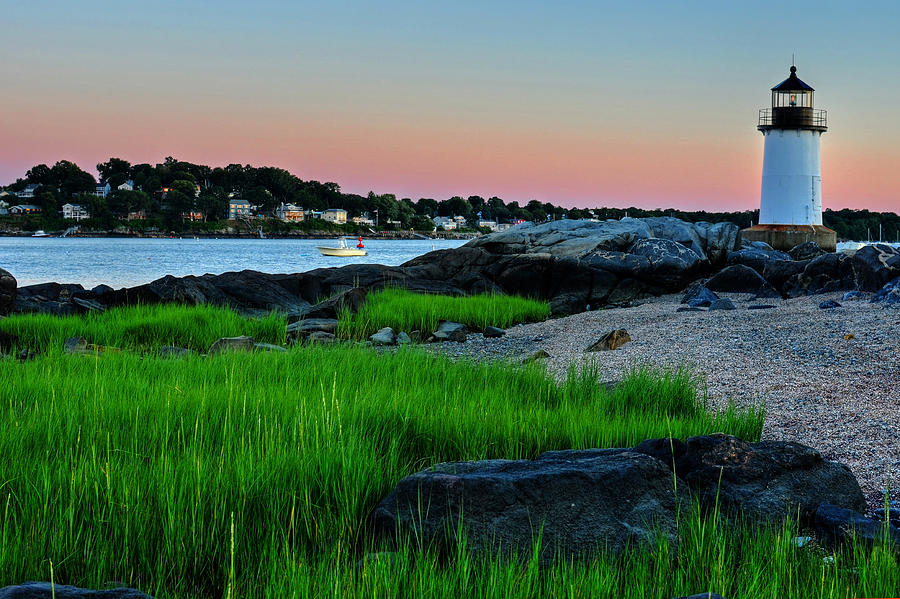 Marblehead Light- Marblehead
Location: Northern Tip of Marblehead Neck, entrance to Marblehead Harbor
Visiting: The grounds are open all year. The interior is open by special arrangement.
In August 1831 Congress gave the money for a 23 foot high tower and it was built in 1835 and commissioned on October 10, 1835. Despite the work on the tower and associated keepers’ house, the tower fell into poor condition and by 1893 a new light was requested. This new light consisted of eight cast iron piles on concrete foundations. It was first illuminated on 17 April 1896 as a fixed white light. Later in 1922 it was changed to fixed red and then in 1938 to fixed green. In 1960, the light was automated and a new 300 millimeters optic was installed. Marblehead Light is the only tower of its type in New England.

Newburyport Harbor Range Lights- Newburyport,
Location: Newburyport Harbor, Merrimack River
Visiting: Generally there is no public access to interior of lighthouse but for a donation of $350 you can eat on top of the lighthouse
The rear light is a brick tower, 53 feet in height, located close to Water Street near the Merrimack River Coast Guard Station. The tower was traditionally painted white on the upper third of the river-facing side, with a thick white stripe down the rest of the facade. That side is now painted entirely white, while the other three sides are unpainted. The tower is topped by an eight-sided lens room, which is surrounded by an iron balcony and railing. 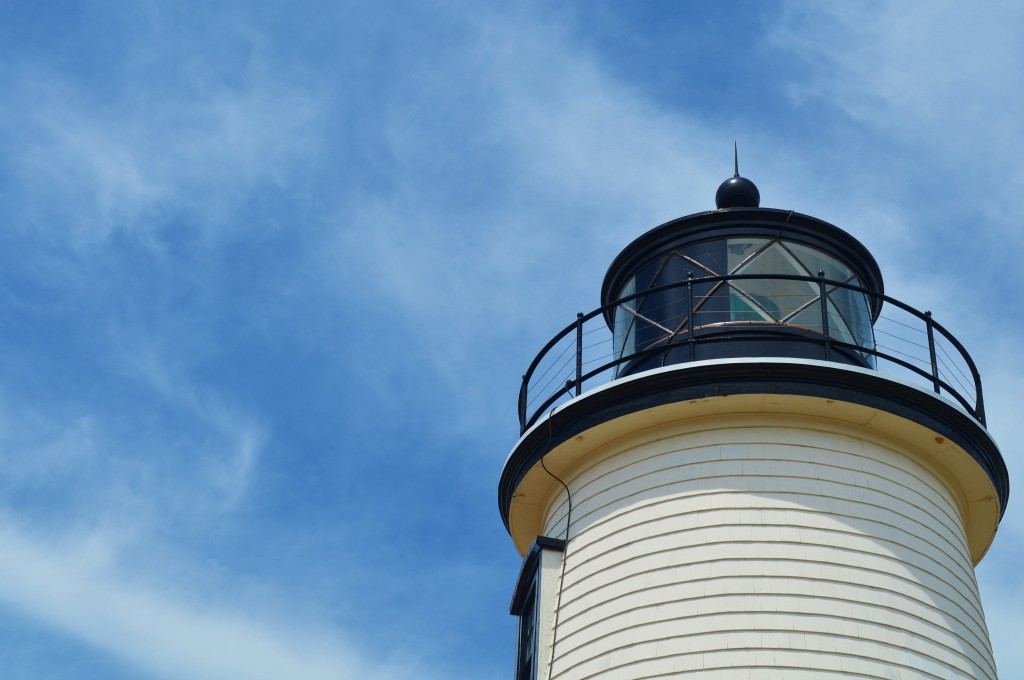 Straitsmouth Island Light- Rockport
Location: Straitsmouth Island, off east side of Cape Ann
Visiting: No public access to interior of lighthouse
Straitsmouth Island Lighthouse was built in 1835 to mark the entrance to nearby Rockport Harbor. The Town of Rockport owns the tower and 1.8 acres it stands on. The light is an active aid to navigation and the light and fog signal is maintained by the U.S. Coast Guard. The balance of the 31 acres island is owned by Mass Audubon Society and is maintained as a bird and wildlife sanctuary. The light station is easily seen from the end of Bear Skin Neck in Rockport. The current lighthouse tower was built in 1896. The island is only accessible by boat.

Thatcher Island Twin Lights- Rockport
Location: Thatcher Island, Off east coast of Cape Ann
Visiting: No public access to interior of lighthouse, Island is open mid-June until Mid-September.
Also known as Cape Ann Light Station, these twin lights are the only surviving multiple lights on the coasts of the United States. The original 45-foot towers were constructed and lit in 1789—making them among the oldest of America’s lighthouses. The 124 foot granite towers seen today replaced the original lights in 1861. The two towers were constructed so that when a ship sites on both towers, they point to true north. The island is open Mid-June until Mid-September and has 3 miles of groomed walking trails, a visitor center, and museum.

Hospital Point Light- Beverly
Location: Bayview Ave
Visiting: No public access to interior of lighthouse but occasionally opens for events.
Established in 1871, Hospital Point Light marks the deep water channel to Beverly, Salem and Marblehead. The square pyramidal light tower is 45 feet (14 m) tall, made of white painted brick and is topped with a 10-sided lantern. The keeper’s house is an example of Queen Anne style architecture.