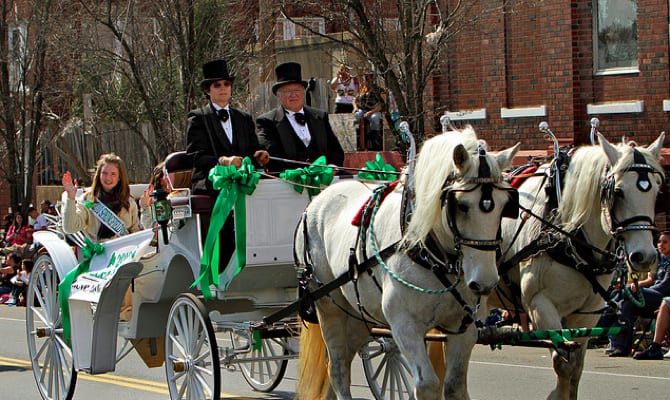 Governor Charlie Baker has declared March 2015 as Irish Heritage Month in the Commonwealth, a proper tip of the hat to Massachusetts’ large Irish-American community.
In case the Irish Heritage Trail (or some of the pub names) didn’t tip you off, nearly a quarter of all Bay State residents claim Irish ancestry, making Massachusetts the most Irish state in America, according to the US Census.
This year, St. Patrick’s Day falls on Tuesday, March 17, but in Massachusetts, the festivities fittingly run all month long. Here are some activities to get you in an Irish mood during March.
Parades
The parade season kicks off on Saturday, March 7, with the annual Cape Cod St. Patrick’s Parade in Yarmouth. Celebrity guests marching this year include Channel Five meteorologist Cindy Fitzgibbon, who will serve as this year’s Grand Marshal, and New England Patriots running back Jonas Gray. 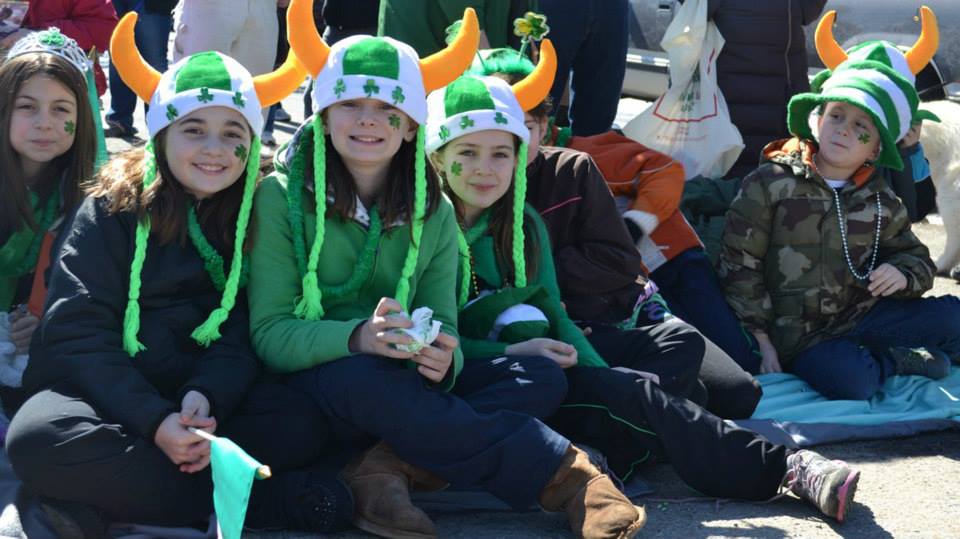 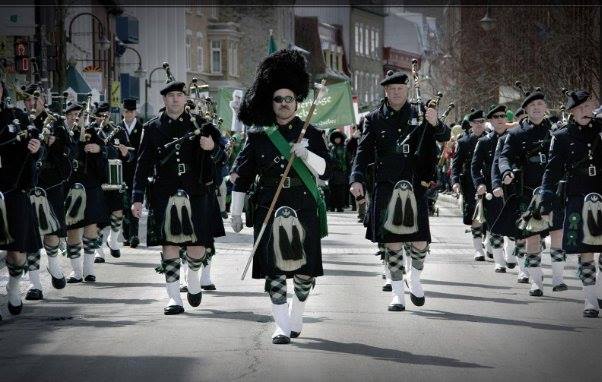 The Irish are a musical people, of course, and this month you can enjoy acclaimed performers, such as Irish tenor Ronan Tynan, the Chieftains, Celtic Sojourn and Dervish, along with great local favorites like the Dropkick Murphys, fiddler Seamus Connolly and the Boston Police Gaelic Column of Pipes & Drums. 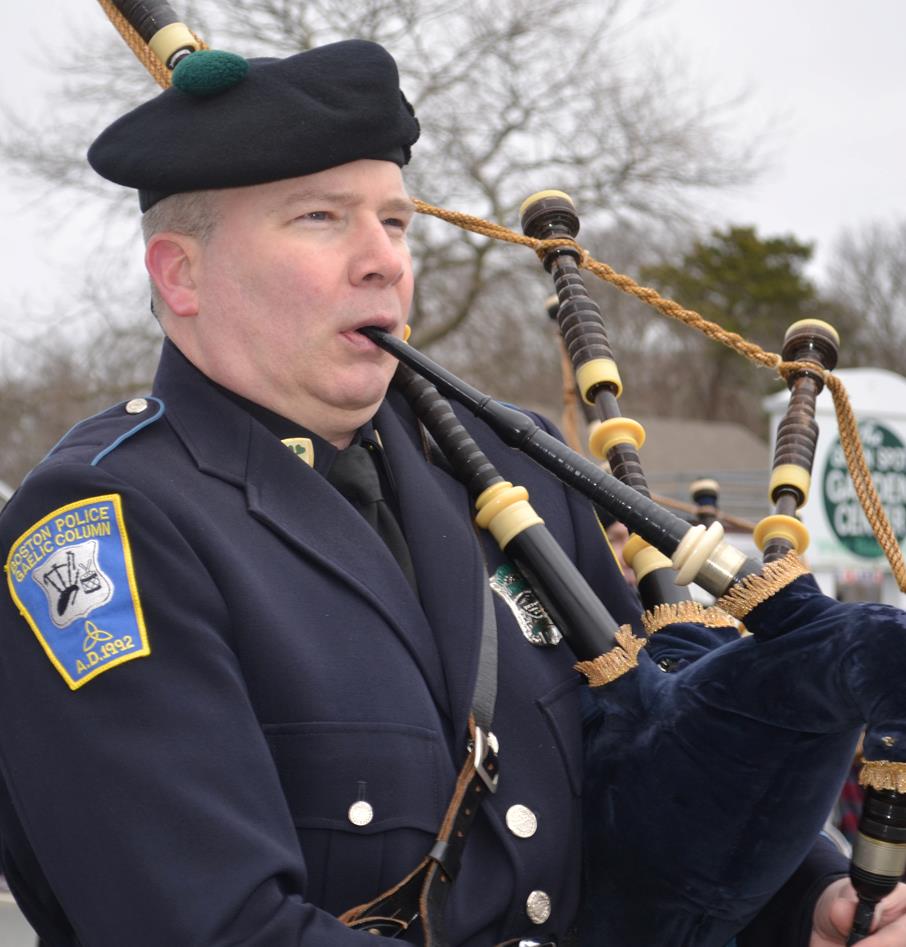 Boston Police in the St. Patrick’s Day Parade via Facebook 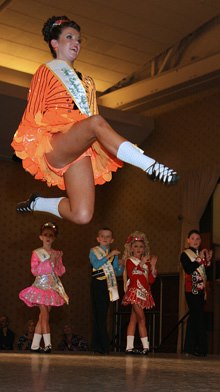 A set dancer at the Harney Academy of Dance in Walpole, MA via Facebook

Film & Theatre
Irish Film Festival Boston, now in its 15th year, returns to the Somerville Theatre in Davis Square from March 19-22. Expect a mix of feature films, short films and documentaries made in Ireland, which will be accompanied by various filmmakers, directors and actors discussing their work.
Each year, the Reagle Theatre in Waltham also presents A Little Bit of Ireland, a full-stage cabaret production of Irish music, dancing, storytelling and comedy. Guest artists this year are Broadway stars Rick Hilsabeck and Sarah Pfisterer.
The Kennedys 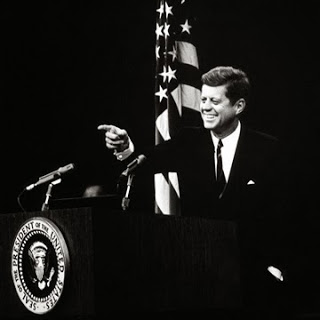 JFK at the podium, courtesy of the JFK Museum

As you may already know, Massachusetts is the native state of John F. Kennedy, the 35th President of the United States and one of the most important Irish-Americans in U.S. history. A visit to the JFK Library & Museum at Columbia Point in Dorchester sheds light on the Kennedy family’s proud Irish heritage and JFK’s time in office, known affectionately as the Camelot Years.
The Edward M. Kennedy Institute for the US Senate is opening up right next to the JFK Library on Tuesday, March 31. The institute is dedicated to educating the public about our government, in addition to encouraging participatory democracy. 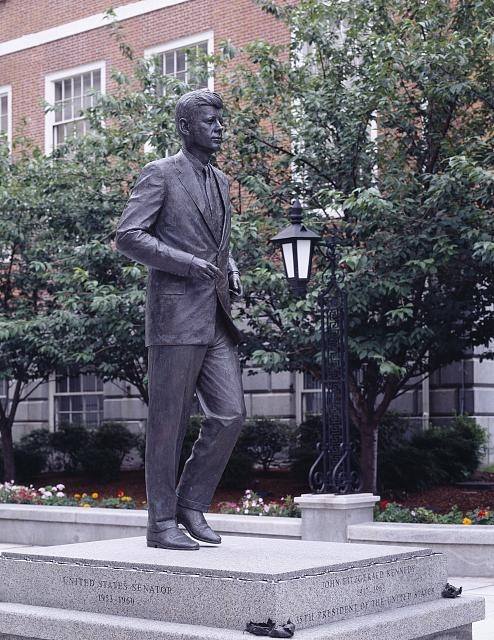 JFK statue outside the State House in spring, courtesy of the JFK Museum

Irish Groups
Founded in 1737, the Charitable Irish Society holds its annual dinner each year on March 17; this year’s honored guest is author Peter Quinn. The week before, the Irish Networking Society of Boston hosts its annual party at the Massachusetts State House on March 13, while the Irish American Partnership will have its annual breakfast on March 17 at the Boston Harbor Hotel.
Irish Heritage
If you’d like to learn more about Boston’s Irish history while stretching your legs, take a guided tour of the Boston Irish Heritage Trail over St. Patrick’s Day weekend and on March 17th. The tour starts at the Visitor Center on Boston Common and winds its way through 300 years of the Boston Irish, with stops at significant landmarks all along the way.
To learn more about what’s happening in Massachusetts for St. Patrick’s Day, click here. You can also find the latest on the Commonwealth’s Irish community year round here.
Photo at the top of the Holyoke Parade via the Holyoke Parade Committee