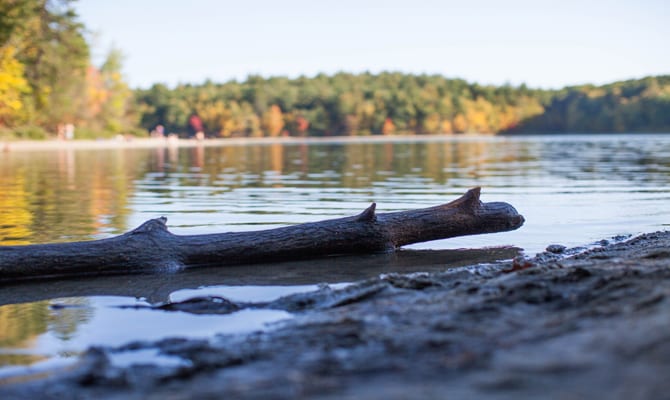 Concord, Massachusetts has more of a claim to fame than just “the shot heard ‘round the world” and the start of the American Revolution. It was also Concord that helped make Transcendentalism, one of the 19th century’s most influential intellectual movements, a household name.
Only a few steps away from the Old North Bridge resides the Old Manse, enveloped in aged ash trees and Concord grapes; it’s here that the heart of transcendentalism’s roots can be found. 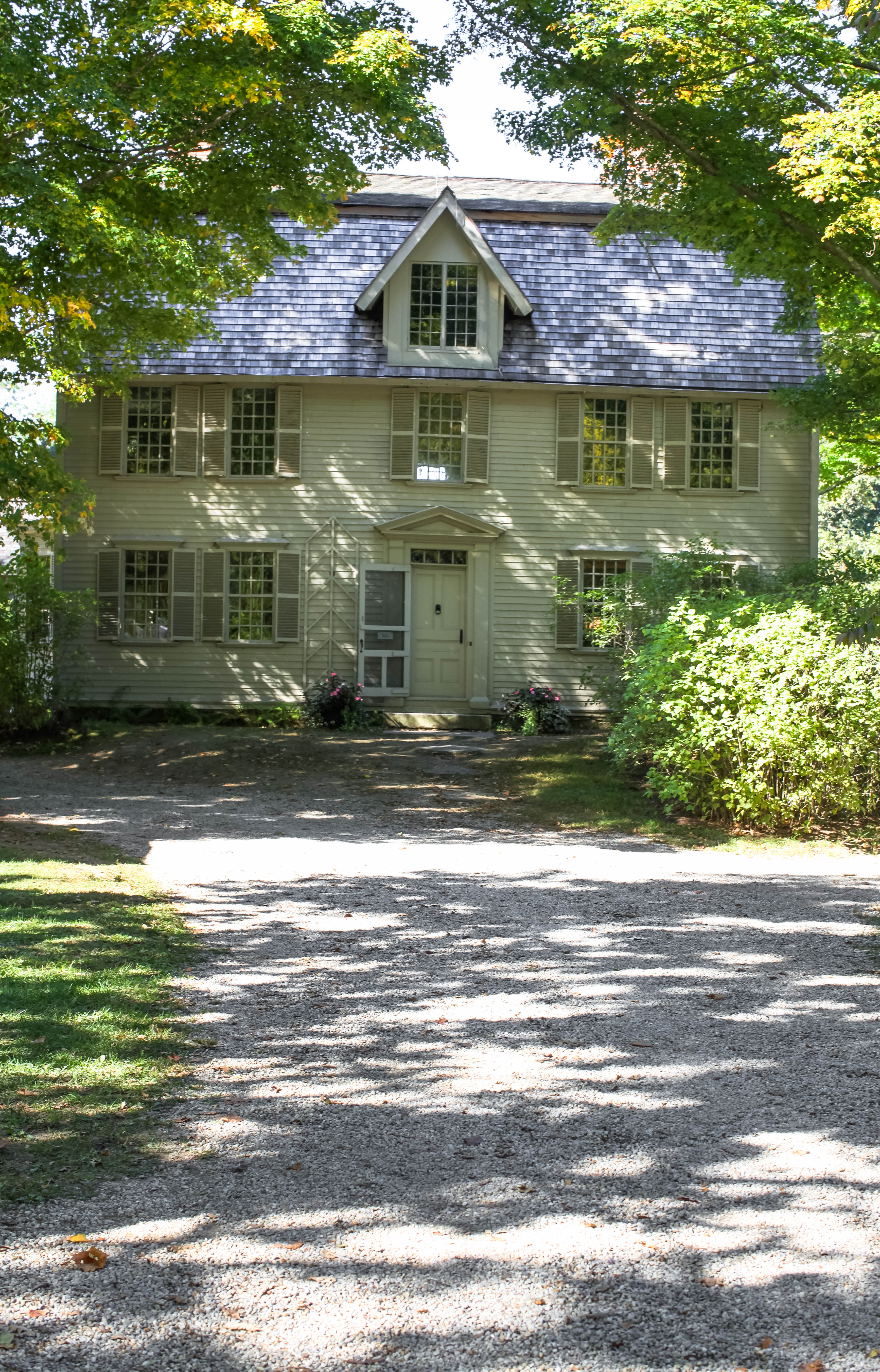 
Many American students come across transcendentalism in school, either through Nathaniel Hawthorne’s The Scarlett Letter or Louisa May Alcott’s Little Women. What’s fascinating to me about these novels and other writings are that they were penned within miles from one another.
It was in Concord were Ralph Waldo Emerson looked through his window and wrote “Nature.” He was living at the Old Manse, which was in his family from 1770 until 1939, when the Trustees of Reservations acquired the building and began offering tours. 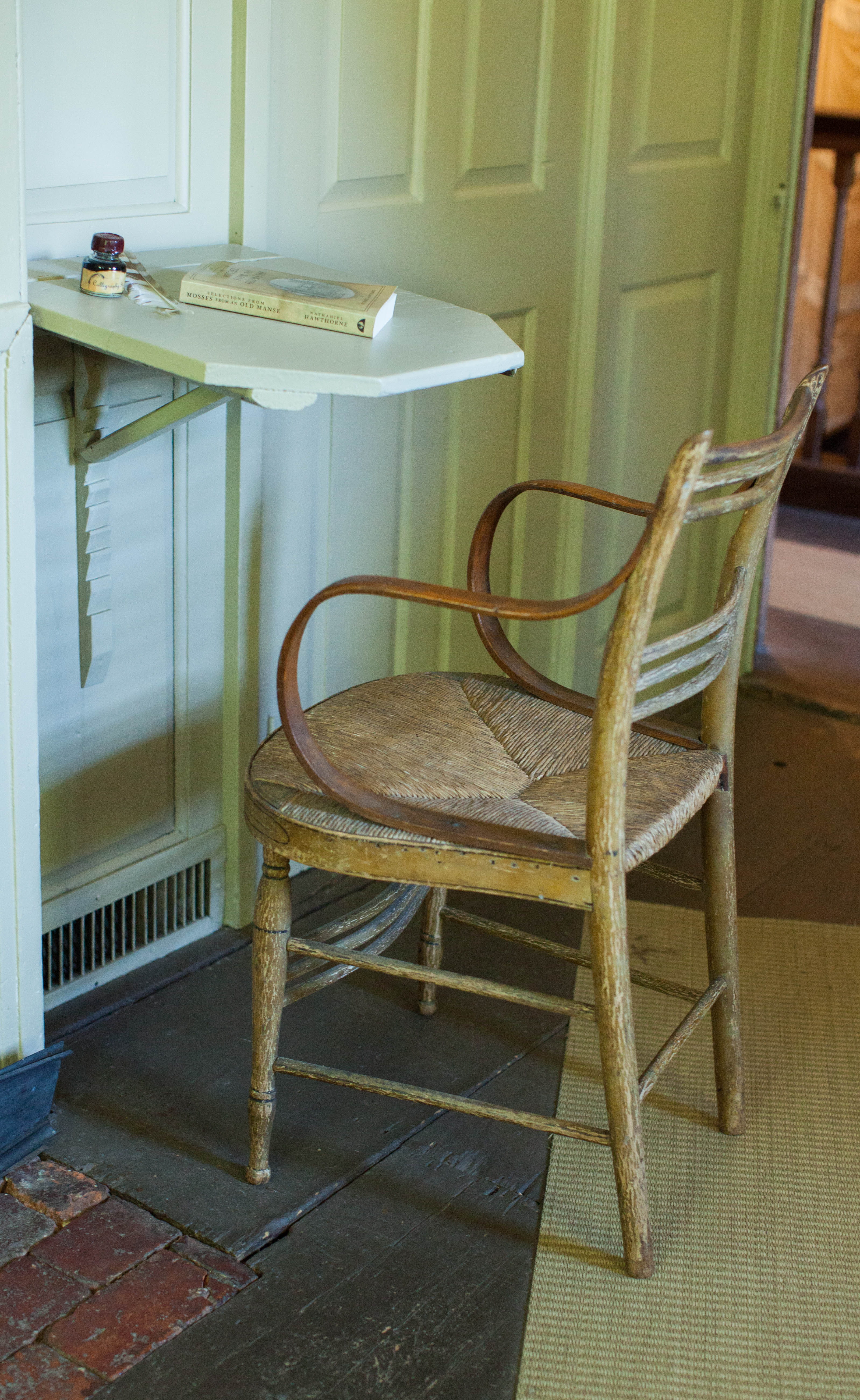 Photo: Emerson’s desk, which was built by Henry David Thoreau, at Old Manse by Meg Brown


Hawthorne rented the house from the Emersons for a stint after they had moved to another house, which now sits across the street from the Concord Museum and down the road from Orchard House, home of Louisa May Alcott.
My Literary Nonfiction college class toured these houses on a field trip earlier this fall. We had spent the beginning of our semester studying the movement and writings three hours north of Concord on the campus of Lyndon State College in Vermont, and although gazing out the same windows as Emerson and laughing at Alcott’s “mood pillow” added perspective to our studies, it was our walk to Walden Pond that truly made the era come alive. 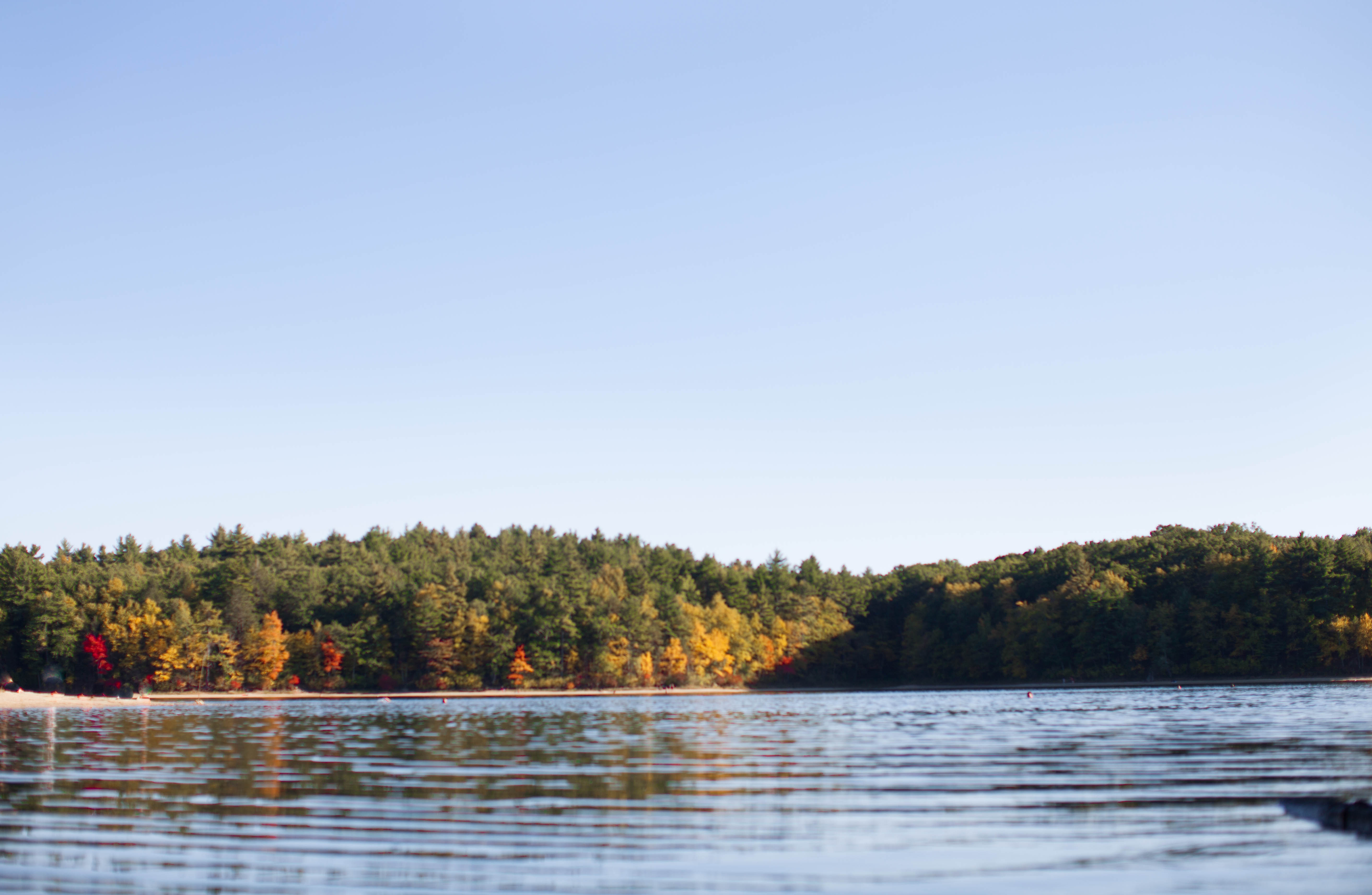 
“Walden” was published by Henry David Thoreau in 1854 after he spent two years, two months, and two days living in a self-built cabin on the shores of Walden Pond, courtesy of his friend, Emerson, who owned the property. I read a few sections of his essay while listening to children splash each other and watching the reflection of fall colors ripple in the water. 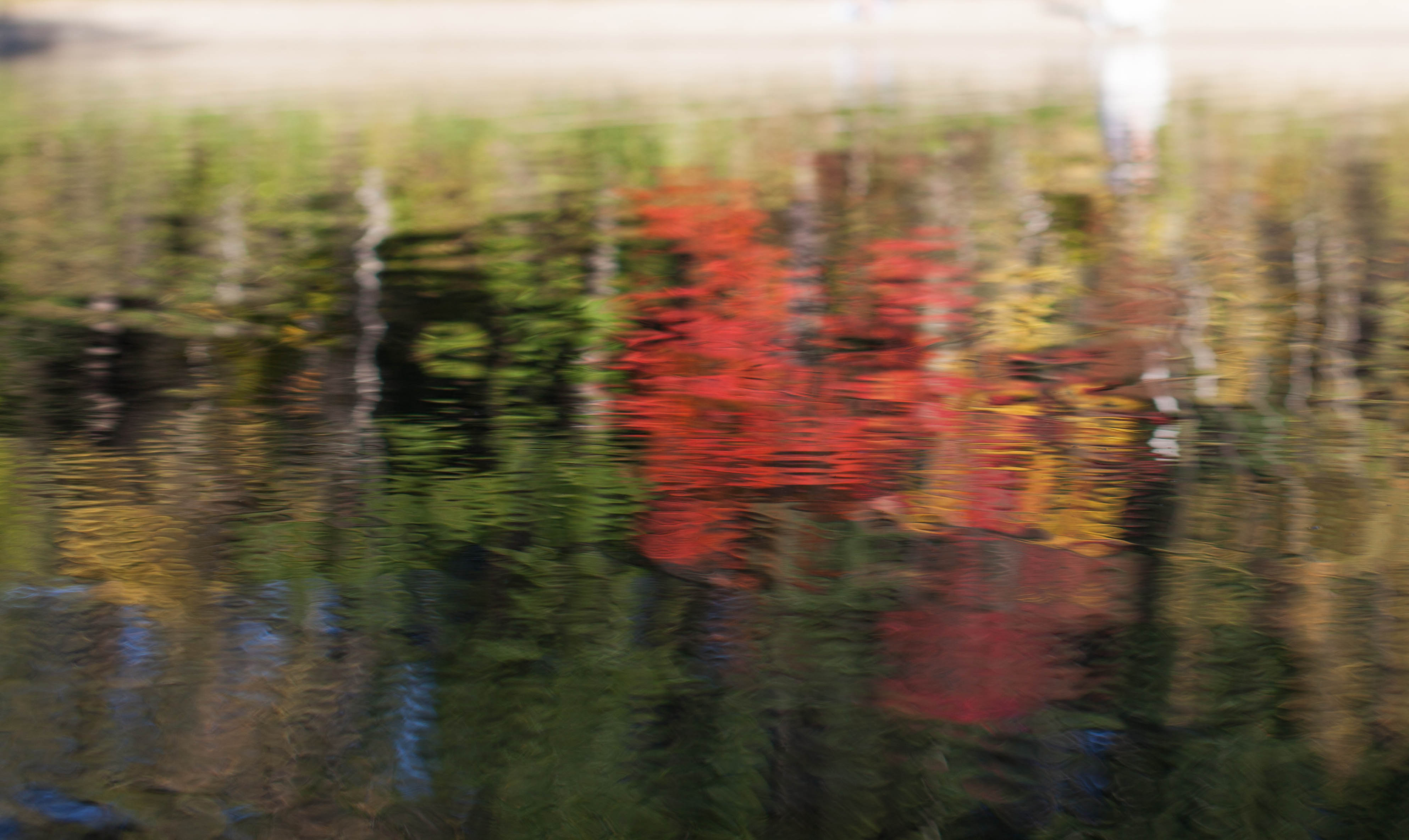 Photo: Ripples in the water at Walden Pond by Meg Brown


While visiting a replica on the other side of the pond, I was reviewing a photo I had taken when a man approached me with a camera. “May you take a picture of me?” he asked, enthusiastically. It was difficult to understand him, but he kept exclaiming how excited his students would be when they saw he had been to Walden Pond after having taught the essay for seven years. He couldn’t stop smiling! “Where are you from?” I asked. “Morocco.”
This teacher is one example of how many to make the pilgrimage from around the world to visit this humble little pond. The legacy of transcendentalism lives on nearly two hundred years later, as evidenced by Concord’s “Barrow Bookstore,” which sells a variety of used books, including a large section from the town’s own famous authors. 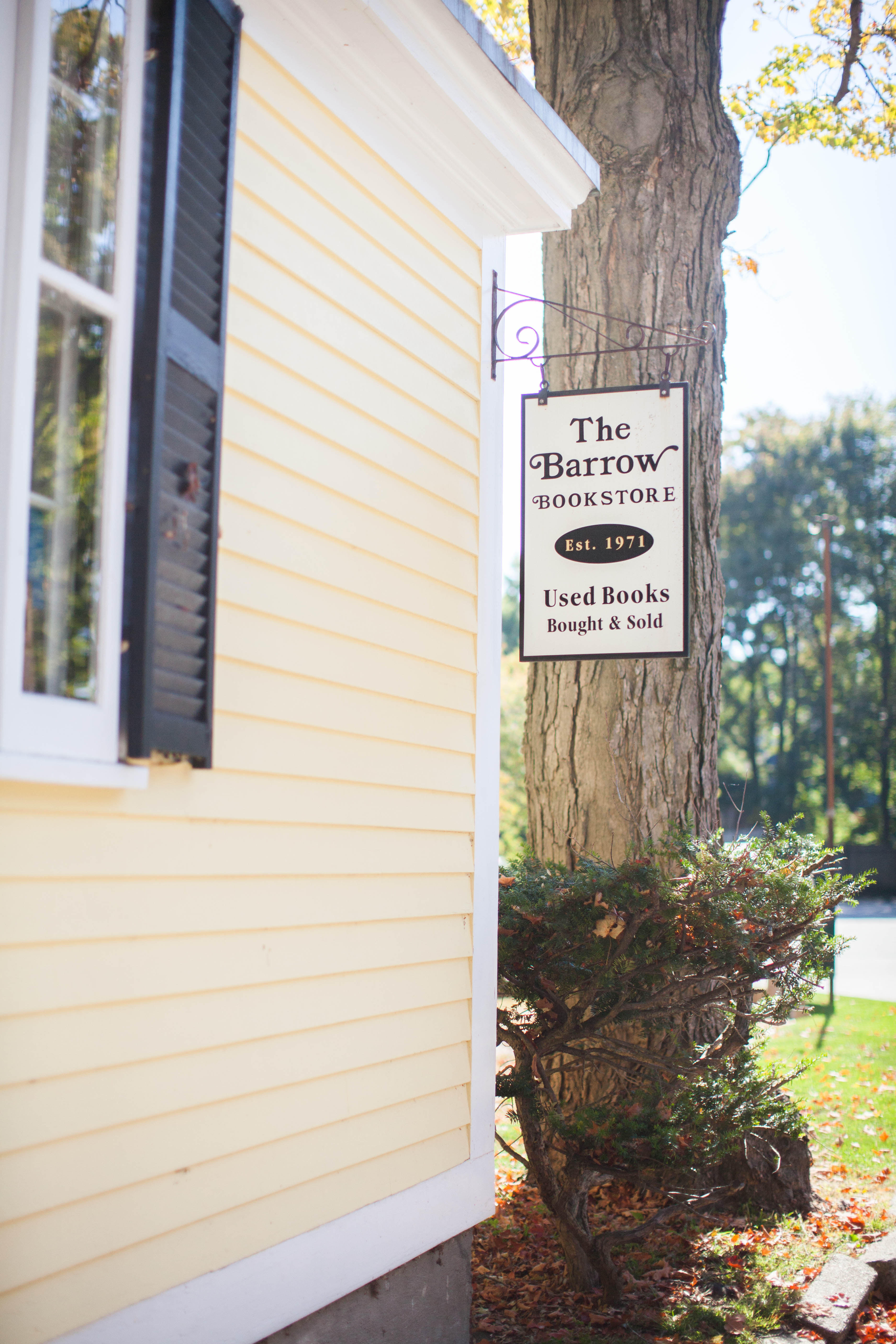 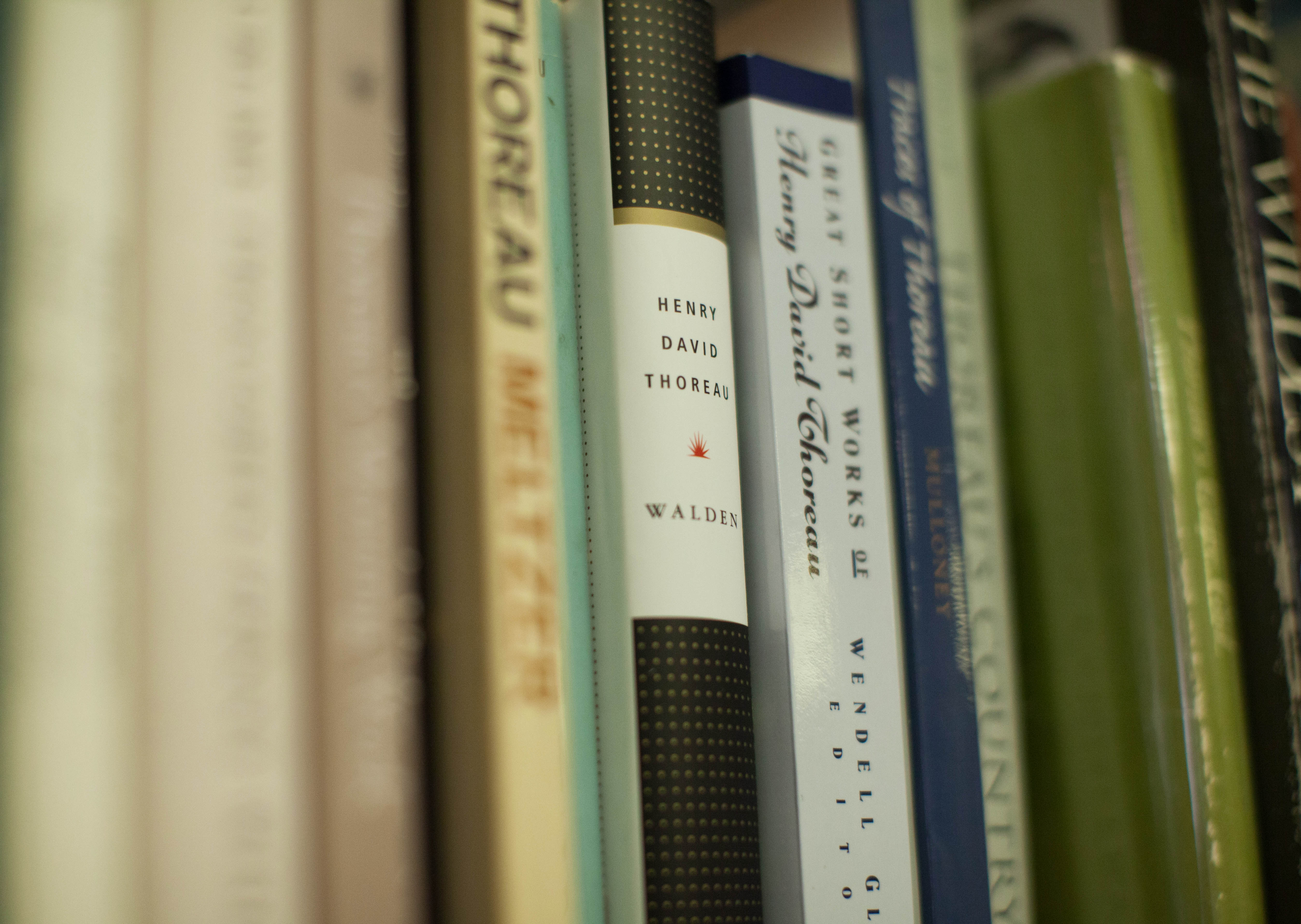 Photo: A slice of the selections offered by Barrow Bookstore by Meg Brown


I also found a copy of “Pilgrimage,” photographer Annie Leibovitz’s exploration of famous American landmarks. She spent time in Concord photographing the famous homes and I found autographed copies of her book at Orchard House.
A couple of blocks from The Barrow is The Concord Free Public Library, which pays homage to its literary history with busts of renowned authors, including a majestic statue of Emerson. 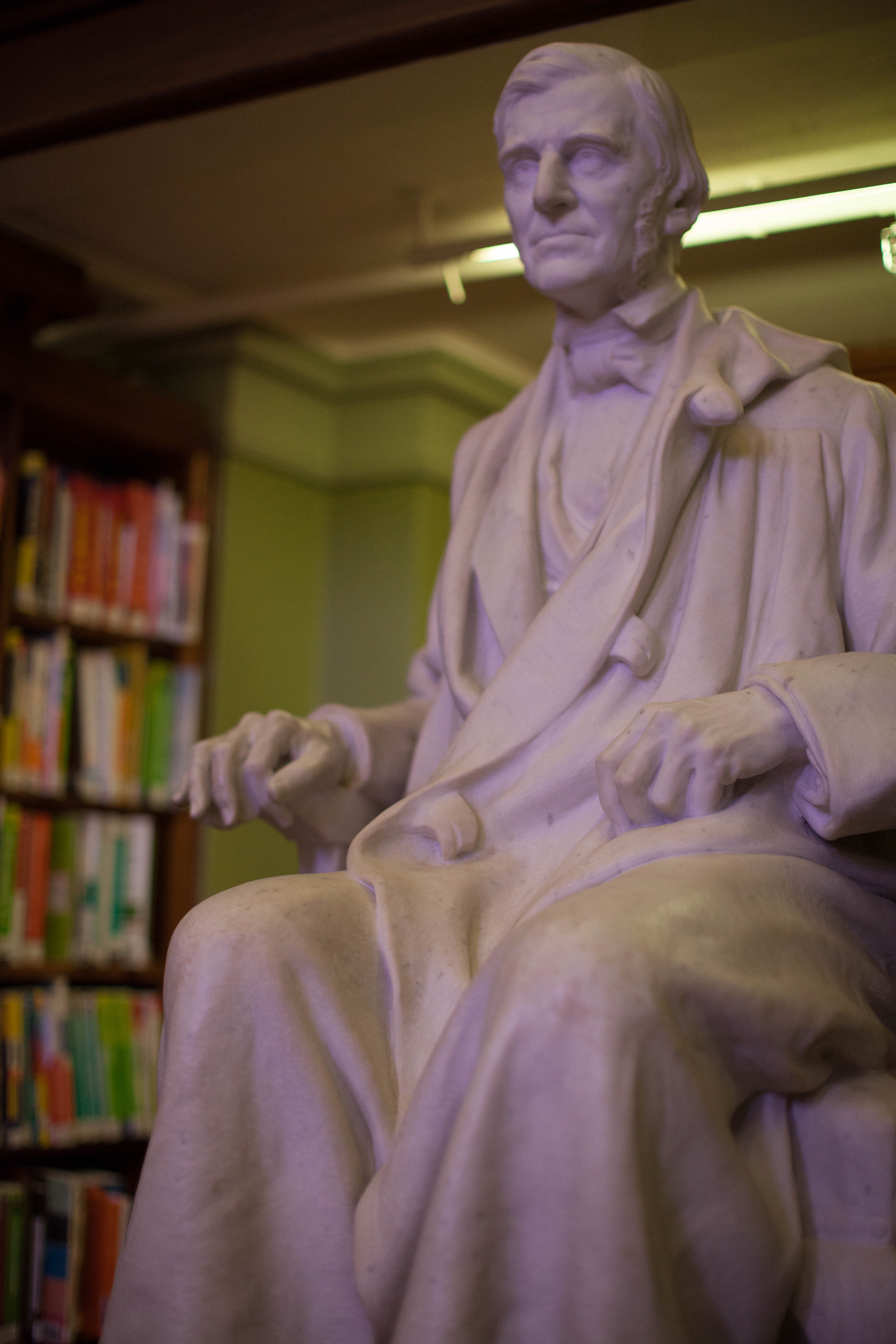 Photo: The likeness of Emerson presides over the Concord Free Public Library to this day by Meg Brown


After all of these years, the transcendentalists still take residence as neighbors at Sleepy Hollow Cemetery in Authors Ridge. There, one can find pens left at the graves of these philosophers, and even beans at Thoreau’s, a nod to the crop he tended in the woods. His grave is a simple headstone reading “Henry,” fittingly nestled between the roots of a nearby tree. He never did leave the woods. 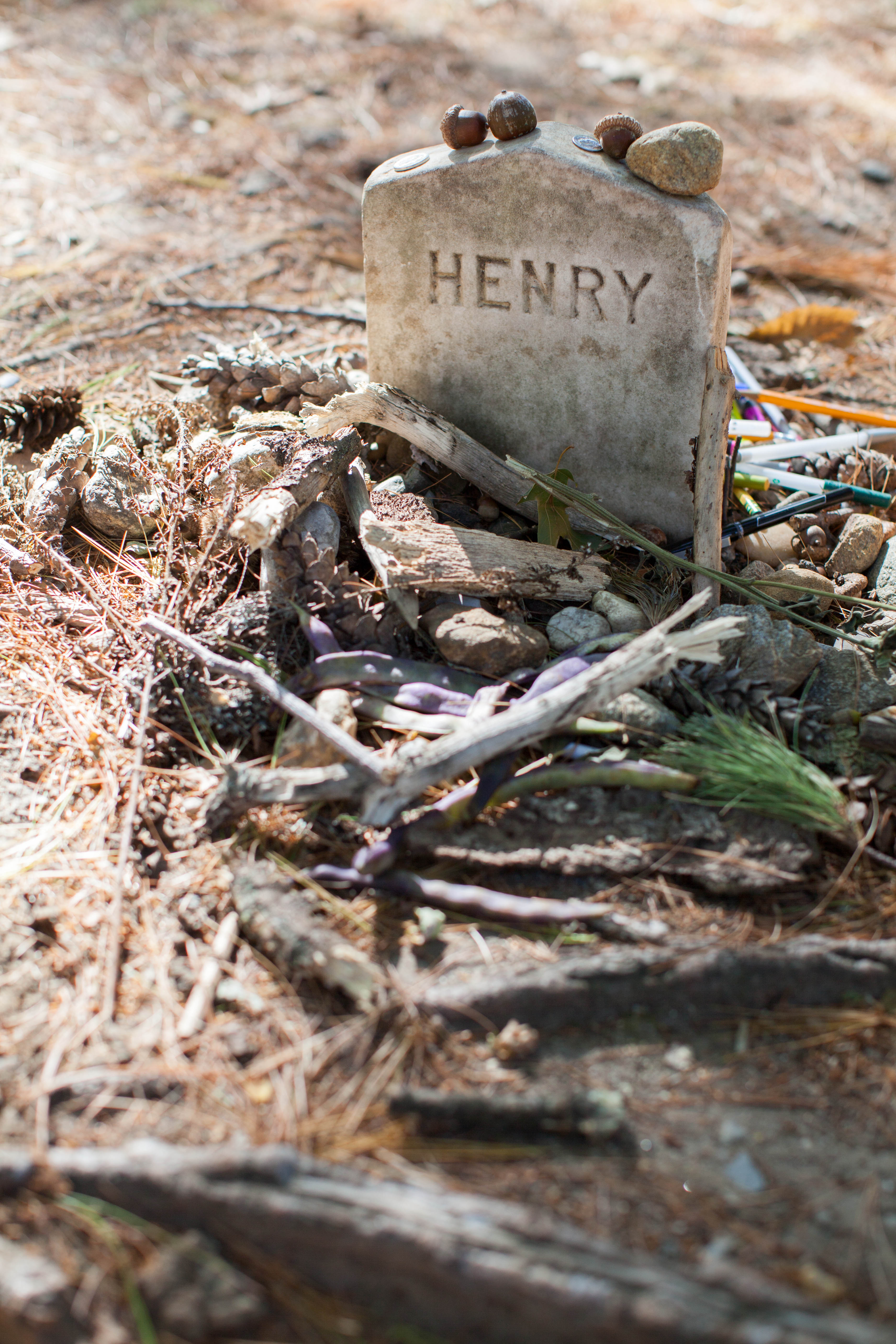 Photo: Thoreau’s headstone in the woods by Meg Brown


Through studying transcendental wisdom and visiting Concord, I learned not only about these great literary figures, but also about myself. Their works are inspiring and timeless, even though much as changed since the pre-Civil War era.
Thoreau wrote, “I went to the woods because I wished to live deliberately, to front only the essential facts of life, and see if I could not learn what it had to teach, and not, when I came to die, discover that I had not lived.” For me, the most important lesson I learned from my study is contained in this quote: “I wish to live deliberately.”
A writer/photographer from Sugar Hill, New Hampshire, Meg Brown was born in Newburyport, MA and visits her grandparents in Massachusetts whenever she can. As owner of MegaBug Photography, she enjoys visiting new places and documenting her journeys. For more on Meg, life and travels, visit her blog at www.missmegabug.blogspot.com.