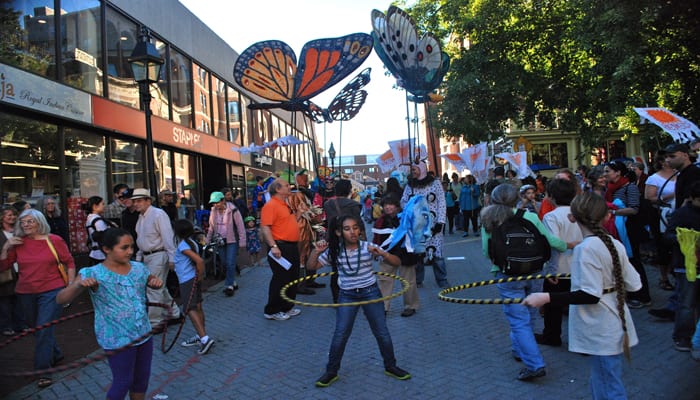 If you’re looking for something free, fabulous and family-friendly to do on Sunday, September 21st, look no further than Harvard Square!
Next weekend, the second annual Folk Music Festival will come to Cambridge, serving as the centerpiece in a day full of entertainment. Presented in partnership with Club Passim, the festival takes place from noon until 4:00 p.m. on Palmer Street in the heart of Harvard Square…where folk music roots run far and deep. 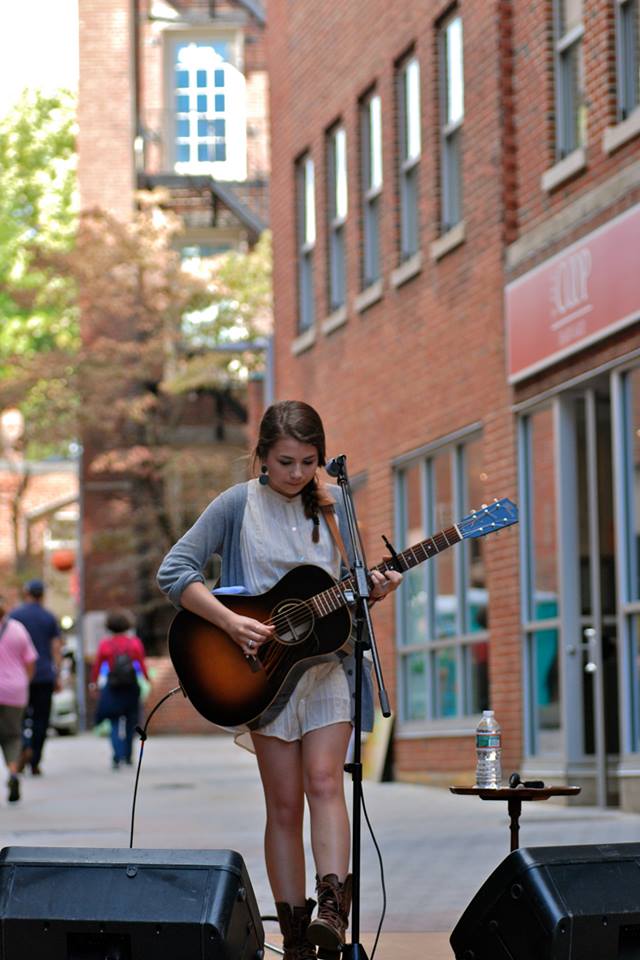 Most folks probably know Harvard Square because of its proximity to the world-renowned university; fewer are aware that this area has been a serious folk music hub for quite some time!
In the 1930s, a shy Harvard student named Pete Seeger helped get his start by bringing a banjo to campus hootenannies. In the world-shaking days of Club 47, Joan Baez met Bob Dylan, and then the world met the ‘60s folk generation, including Baez, Tom Rush, the Jim Kweskin Jug Band, and Jackie Washington.
In the years since, Club Passim has inherited Club 47’s legacy and lived on as a folk hub, helping to launching the careers of Suzanne Vega, Nanci Griffith, Shawn Colvin, Bill Morrissey, John Gorka, Ellis Paul, Dar Williams, and more. In fact, that makes for another good reason to check out the festival: you just might see rising stars before they hit the big time! 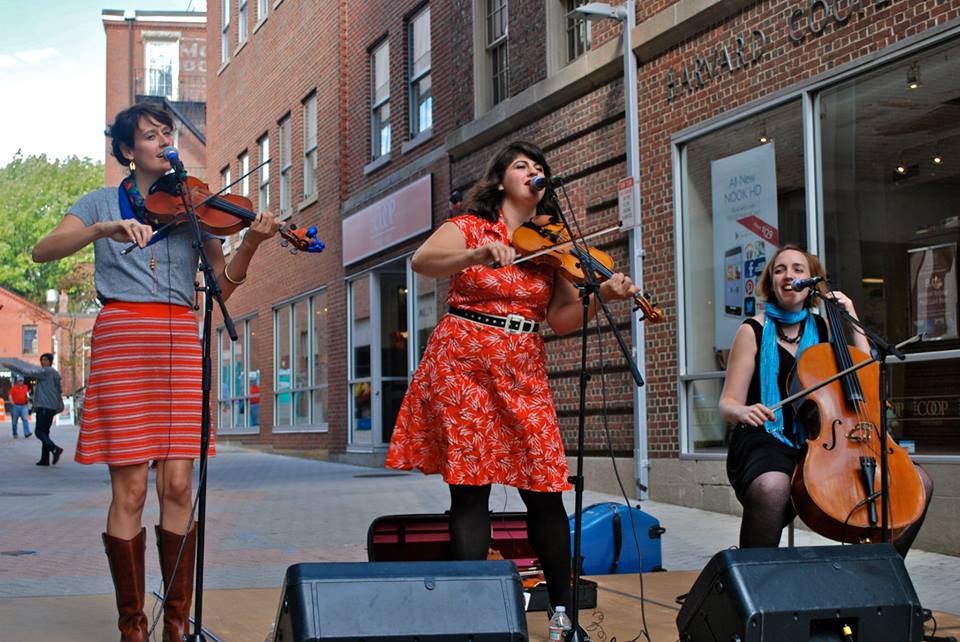 Photo: Musicians on Palmer Street during the 2013 festival

This year’s festival has four different acts in store, with each performer getting an hour to play. The duo No Bones About It will open the festival at noon, to be followed by The Meadows Brothers. Next up at 2 p.m. will be Billy Keane, before Boston’s own Mark Whitaker starts strumming with the final performance of the day at 3 p.m.
Now, if the Folk Music Festival doesn’t call out to you, the other celebrations taking place in Harvard Square on the 21st just might, with a Chowderfest, the Revels Parade and Riversing all in the offing.
From 2:00 until 4:00 p.m., you can sample delicious chowders (as well as soups, stews and bisques) from many Harvard Square restaurants, including Legal Seafood, FiRE + iCE, and Grendel’s Den!
At 5:00 p.m., stroll over to historic Winthrop Park (corner of JFK and Mount Auburn) to join in the pre-Riversing Revels festivities. Giant puppets, music makers, dancers, hula-hoopers and stilt-walkers join together to parade from Winthrop Park to the Charles River to celebrate the autumnal equinox. 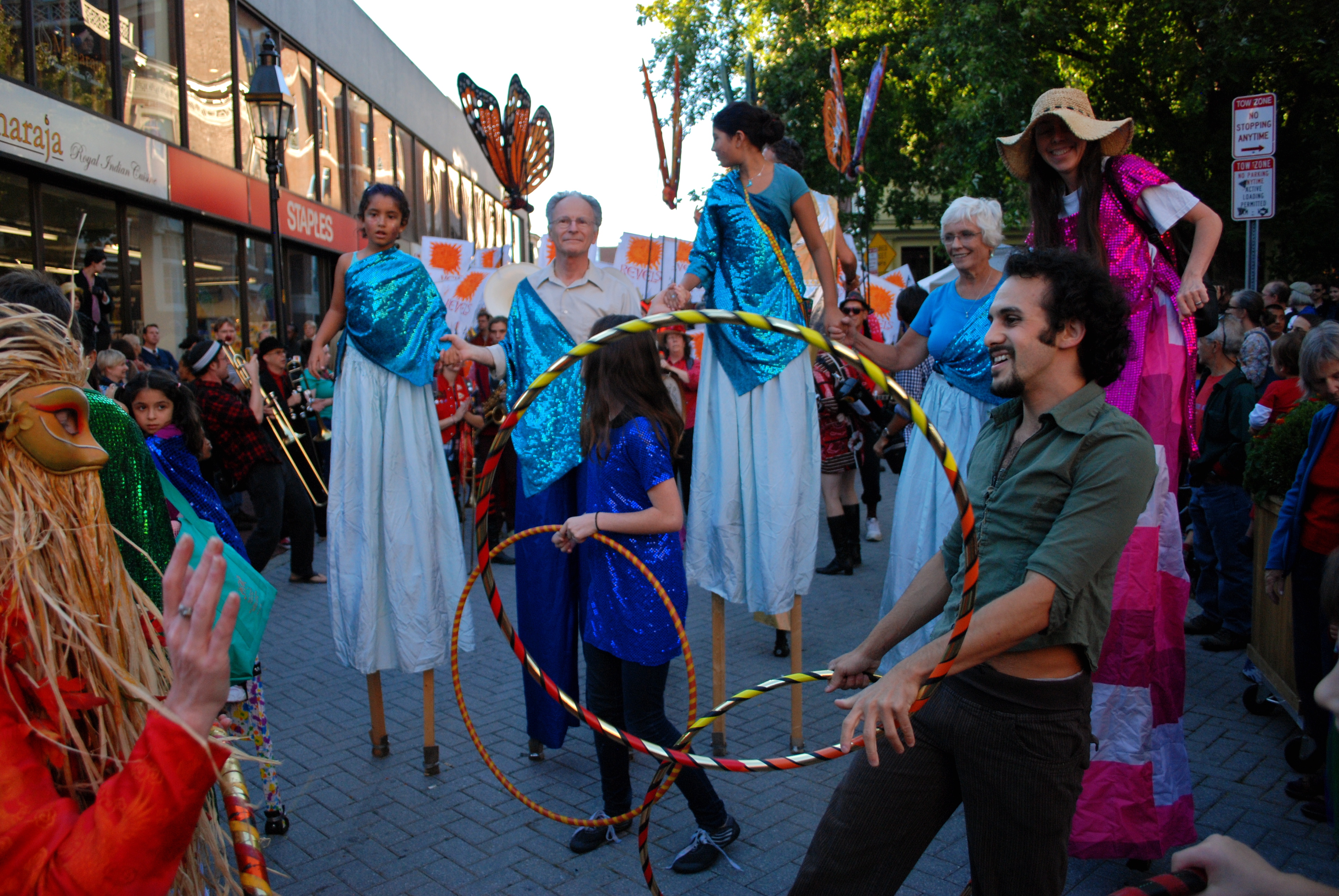 Photo: Getting ready for the Riversing in Winthrop Park

After the warm-up festivities, it will be time for Riversing, a charming community fete that commemorates the changing of the seasons, the beauty of the Charles River, and the spirit of our community through music, song and dance. 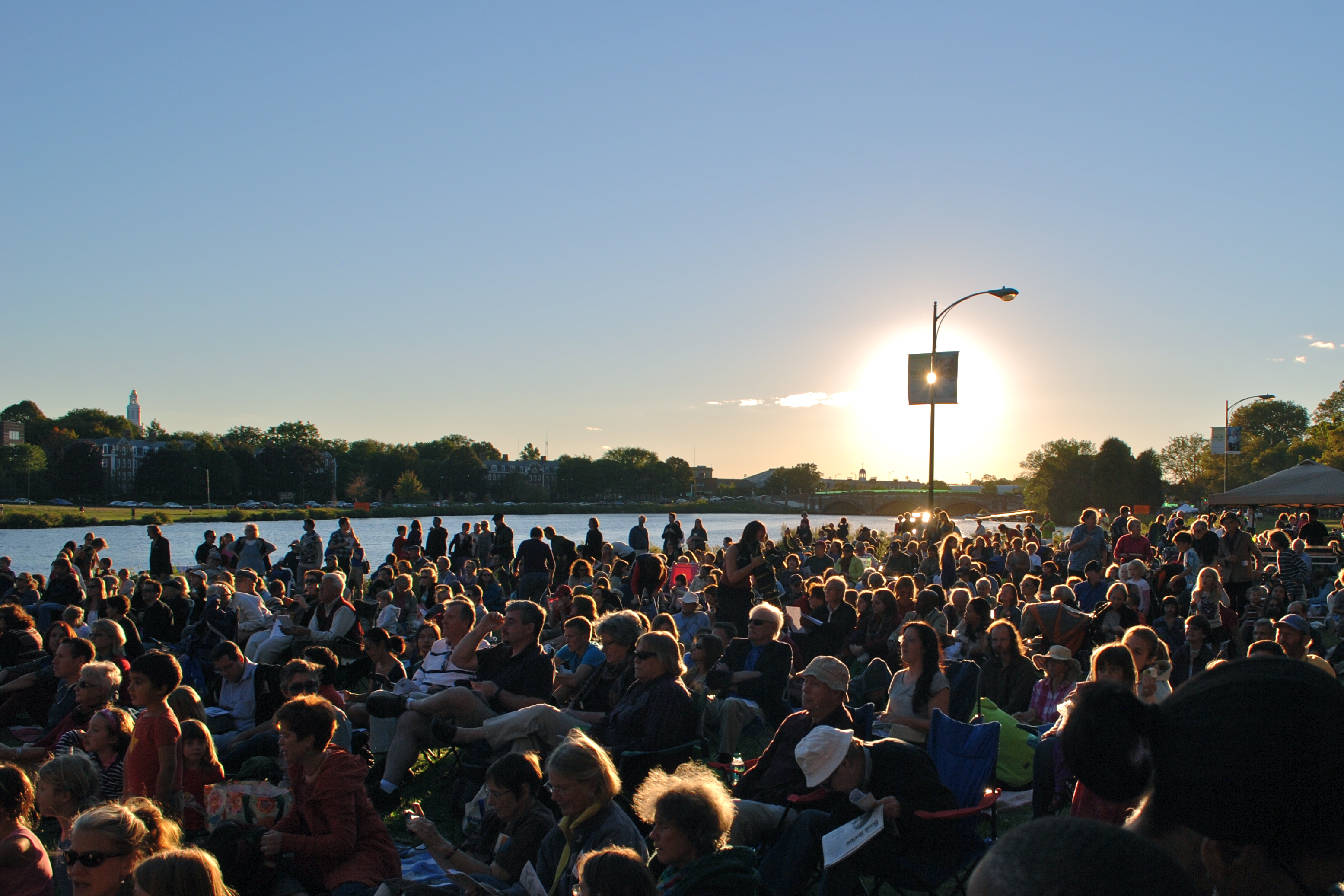 Photo: Singing at sunset along the river

So, come for the day or for the weekend! Enjoy the festival, sample the chowder, join the parade, and sing and dance on the banks of the Charles, as the sun sets over the river and we usher fall in.
Denise Jillson is a Cambridge resident, wife, mom and grandmamma extraordinaire. When not fulfilling the many duties entailed by her latter three titles, Denise also serves as Executive Director of the Harvard Square Business Association.