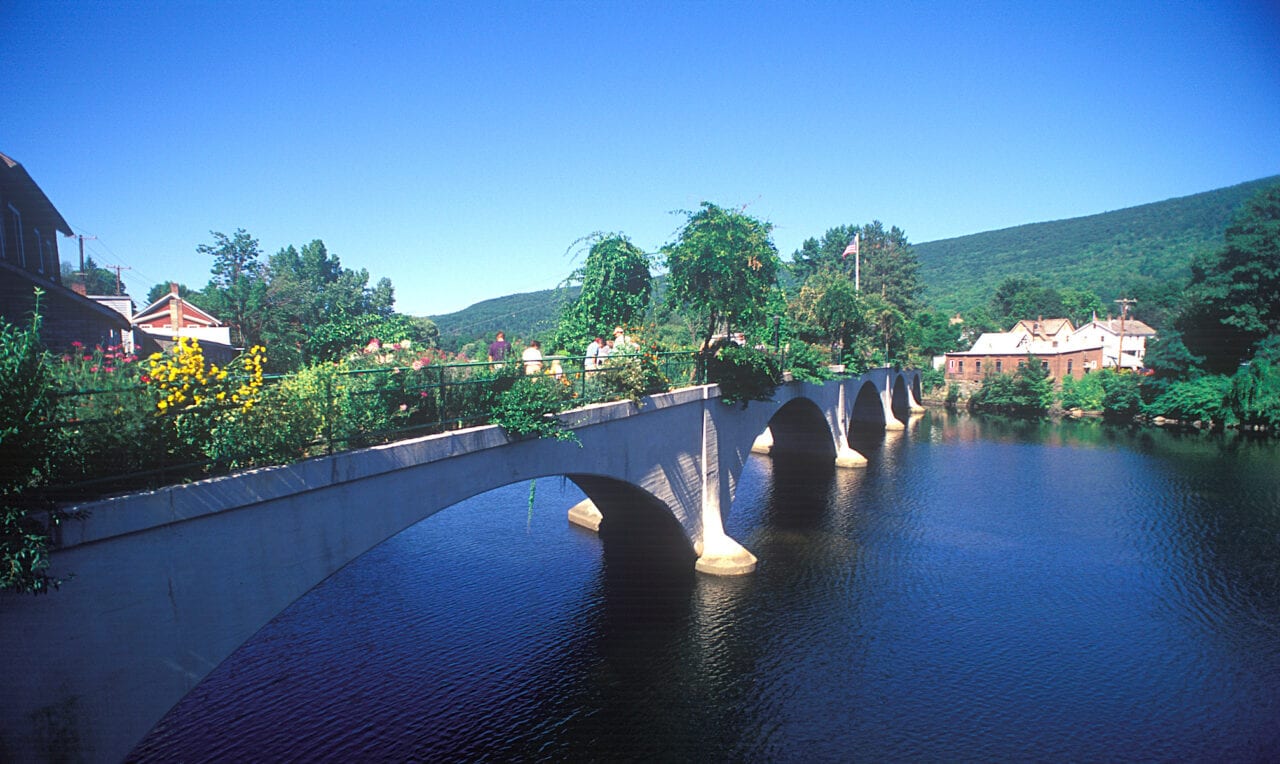 A century ago, the Mohawk Trail opened as one of the first scenic roads in America.
While this byway is best known as one of the top foliage peeping sites in the country during fall, the summer months show a different side of the area, one that’s spectacular in its own right and undoubtedly worth a trip.
Linking Williamstown, one of the Berkshires’ most recognizable and vibrant spots, to the western edge of Worcester County, the Mohawk Trail snakes over and around five rivers, spanning a 69-mile route that includes leafy forests, renowned museums and dazzling vantage points. 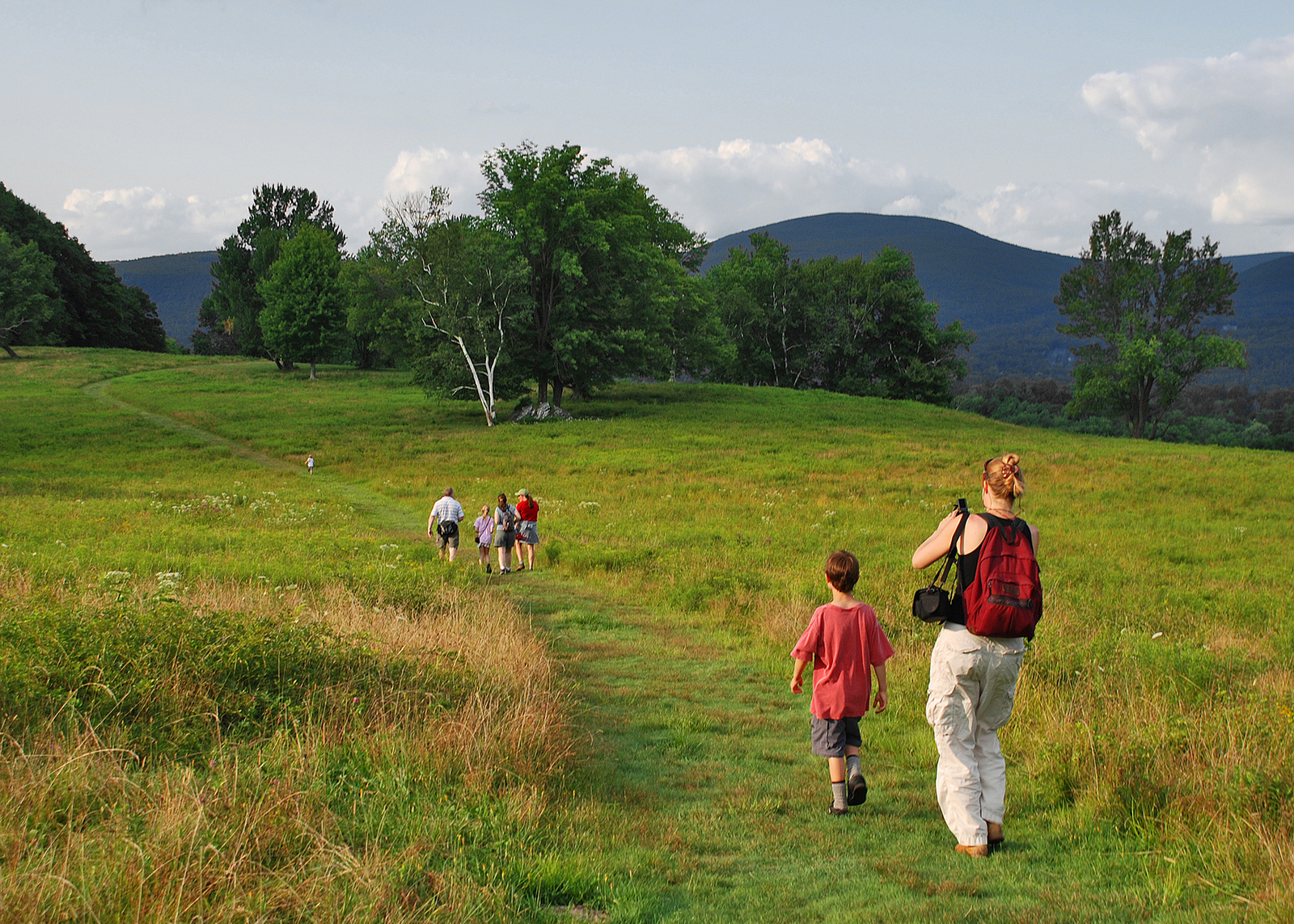 Thousands of years ago, Native Americans first explored the footpaths that became the trail that exists today; the beauty of visiting nowadays is that some parts of the region have changed a whole lot, while others really haven’t much at all. Here’s a glimpse at what awaits.
Williamstown
The Mohawk Trail’s western end is located in Williamstown, which borders Vermont and New York at the northwestern tip of Massachusetts. The town is home to Williams College, one of the oldest and most prestigious liberal arts colleges in the country, and the Williams College Museum of Art, its affiliated museum that boasts more than 13,000 works drawn from a number of different periods.

The Williams College Museum isn’t the only historical gem in town, though. The Sterling and Francine Clark Art Institute, better known as the Clark, is just a few blocks away, and has its own tremendous display of work, with a particularly strong collection of prominent French Impressionist and Academic paintings. The museum recently concluded a ten-year renovation project (which was also recently featured in the New York Times) and now covers 1800 BCE to 1965. 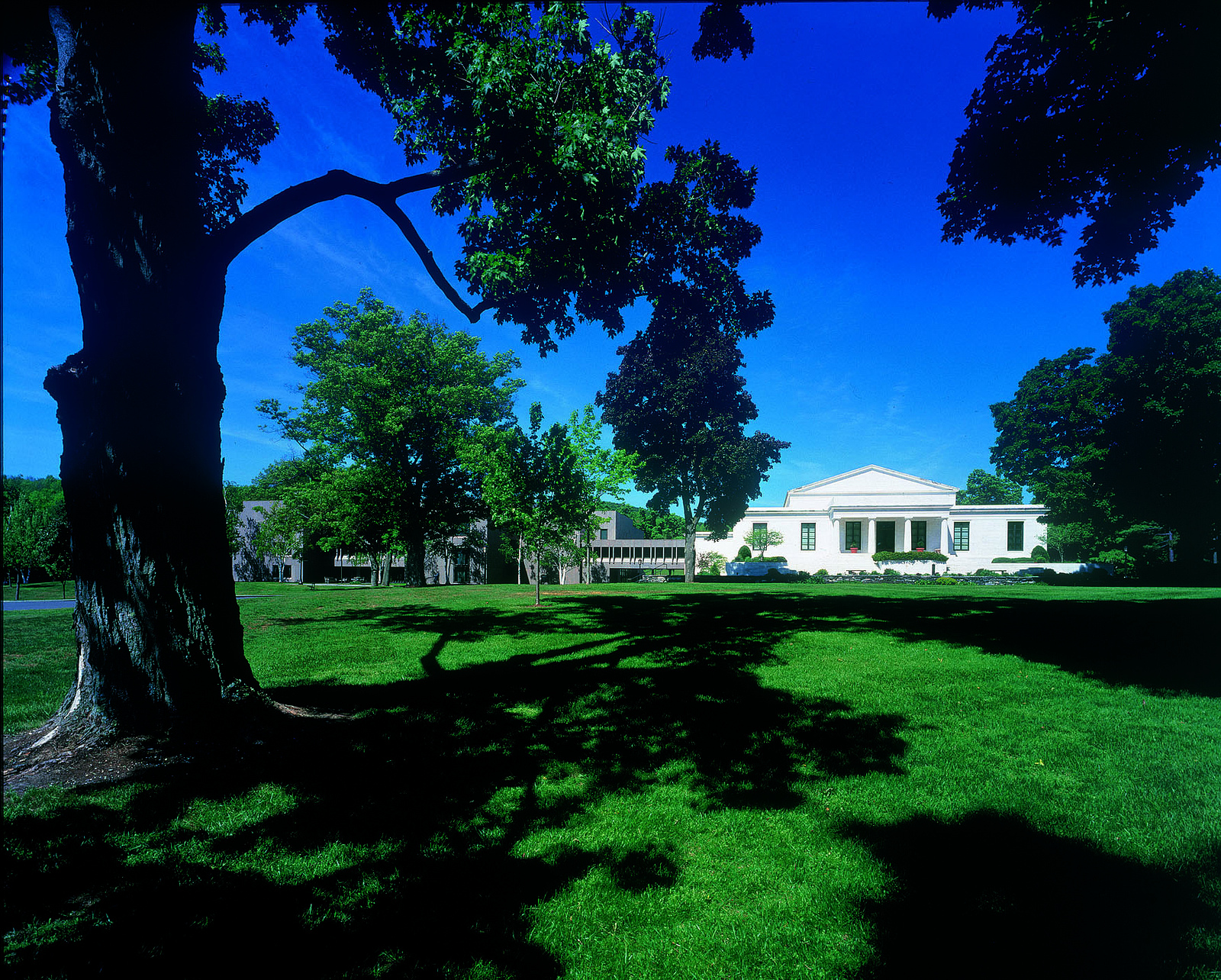 During July and August, art aficionados can also treat themselves to a show or two at the Williamstown Theatre Festival, the Tony-award winning celebration of stagecraft that includes more than 100 performances. For those who would rather spend their time in the great outdoors, Williamstown is bordered by greenery in just about every direction, with Hopkins Memorial Forest to the northwest, Clarksburg State Park to the east and Mount Greylock State Reservation to the south.
For some sleep before heading west, the Maple Terrace Motel is an excellent budget-friendly option; the Berkshire Hills Country Inn and The Orchards Hotel are also great choices, with the latter having the added bonus of breakfast in-house. 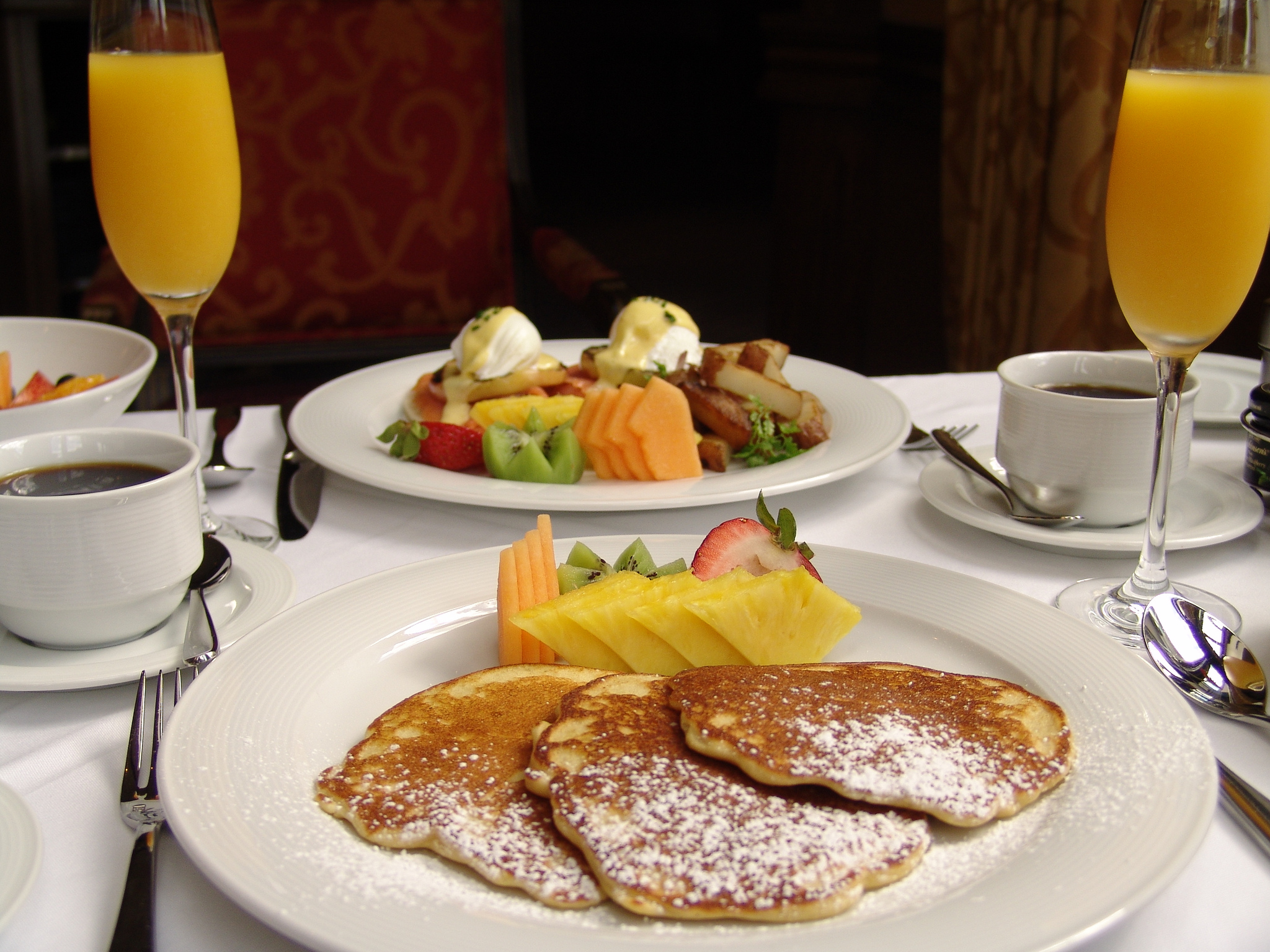 If Williamstown is best know for its artistic offerings, Charlemont’s calling card is adventurous activities. This Mohawk Trail town is home to both Berkshire East Canopy Tours and Zoar Outdoor, two businesses that offer the opportunity to experience the regional scenery in a truly unique way.
Berkshire East specializes in ziplines, with the Base Tour, the Mountain Top Tour, and, for fans of adrenaline, the Valley Jumping Tour, which whizzes visitors along at more than 50 m.p.h. At Zoar, there’s ziplining, rafting, kayaking and rock climbing, as well as packages that combine a couple of the pursuits for the best of both worlds.

Zoar Outdoor also gives guests a place to sleep over, as the Hawk Mountain Lodge can accommodate up to 14 people in its five rooms. The rustic types can rough it at the campsite, which is situated on a plateau above the Deerfield River Valley floor and has plenty of nearby trails for hiking. Travelers who are a little more interested in other lodgings need only drive 15 minutes to the west, at which point they’ll encounter another unique town along the Mohawk Trail scenic byway.
Shelburne Falls
Shelburne Falls marks just about the mid-way point along the route and is one Massachusetts’ jewels. The town is likely best known for its talismanic Bridge of Flowers, which was constructed soon after the turn of the 20th century, originally as a railway. In the 1929, the bridge’s transformation into a garden began, and it remains a one-of-a-kind attraction to this day. 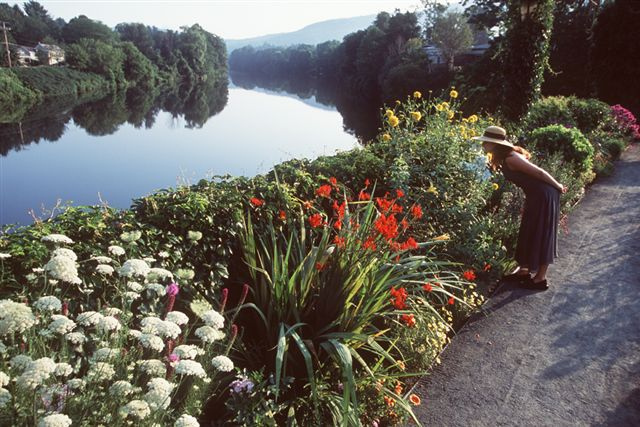 There’s much more to Shelburne Falls than just the bridge, however. The town features a number of art galleries and, of interest to film buffs, Shelburne Falls has also been the setting for a handful of Hollywood movies.
The culinary scene is a lively one, too, with West End Pub and the Foxtown Diner being just a couple of the enticing eateries. To stay over, the Kenburn Orchards B&B is stately and spacious, while the Dancing Bear Guest House is exactly as much fun as it sounds.
Franklin County & Worcester County
The western half of the byway passes from western Massachusetts to central Massachusetts, moving from Franklin County to Worcester County. Before reaching the central section of the Commonwealth, travelers can make stops in Greenfield and Turners Falls. Greenfield is home to Poet’s Tower, which provides a magnificent panorama of the surrounding during all seasons, and Turners Falls is quite suitable for biking, in addition to having some mighty fine restaurants. 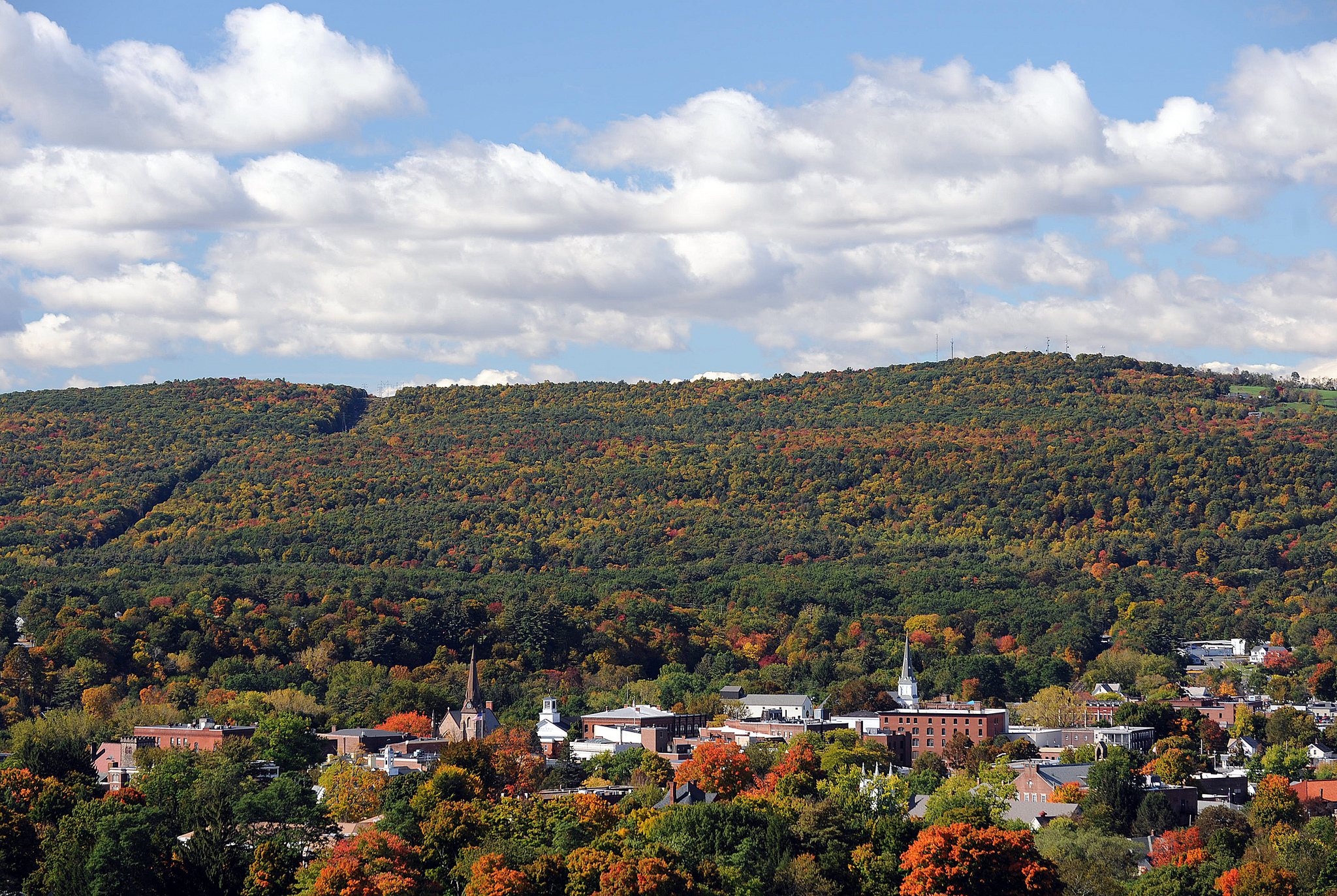 Photo: The view from Poet’s Tower during fall by Paul Franz

After the road bends around Wendell State Forest, a nifty place to fish and swim, it reaches its easternmost end in Orange and Athol, MA. For anyone who needs more than ziplines or whitewater rapids to feel their pulse quicken, Jumptown in Orange is the place to go, because skydiving is on the menu every day. In Athol, Alan E. Rich Environmental Park, which connects to the Quabbin Reservoir, is a good spot for boating, picnicking or just a nice walk.
When it comes to sleeping over, Hampton Inn & Suites Greenfield and Brandt House are choice places to the west of the forest. On the other side, the Travel Inn and Exeutive Inn in Orange are both good economical selections.
To learn more about the scenic byways that carve through western Massachusetts, just click here. You can also discover a whole host of ideas on what to do thereabouts here.