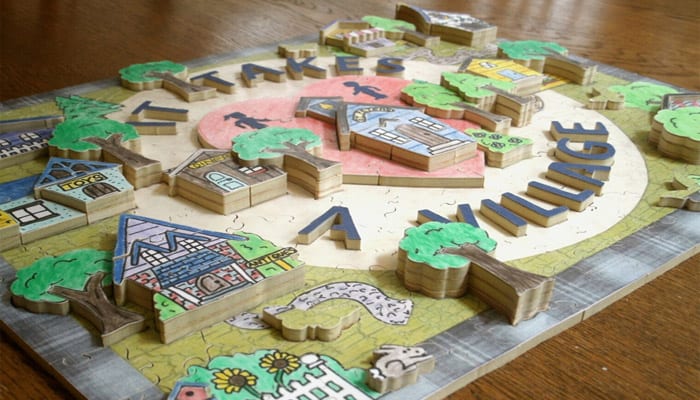 If you have fond memories of doing jigsaw puzzles on lazy summer vacations with the family, the 12th Puzzle Parley, taking place at Salem’s historic Hawthorne Hotel from August 1 – 3rd, may be the missing piece in your vacation plan!

While most of us have had our hands on a cardboard puzzle piece at one time or another, did you know that the earliest puzzles were made of wood and cut by hand? 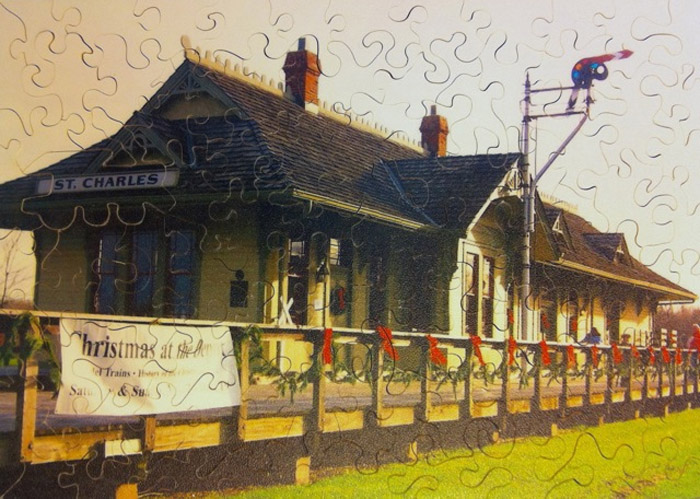 In the late 18th Century, John Spilsbury, an enterprising English cartographer and engraver in London, was the first person to manufacture and commercially sell wooden jigsaw puzzles. Spilsbury took maps of the British counties, affixed them to wood, cut them along county lines, and sold them as “dissected maps” — educational tools to help students learn geography. They made their way to the United States, as adults realized how much fun puzzles were, and by 1907, the country was in the grip of a full-fledged jigsaw puzzle mania!
Salem played a special role in this early 20th Century puzzling frenzy. It was home to the famous Parker Brothers — that’s right, as in Monopoly. Long before Monopoly, Parker Brothers started a line of exquisite, hand-cut wooden puzzles known as Parker Pastime Puzzles and produced them until the 1950s. (With today’s resurgence of interest in wooden puzzles, Parker Pastimes are highly sought  — so if you think you have any tucked away in the attic, this is probably a good time to dig them out!)
Massachusetts has a venerable history when it comes to wooden jigsaw puzzles, and jigsaw puzzle lovers, craftspeople, and history buffs alike will find lots to enjoy at this lively gathering of puzzle cutters, collectors, and enthusiasts. Front and center, of course, are the beautiful, intricate puzzles today’s cutters are making, using tricky devices like drop-outs, irregular edges, and multiple levels. 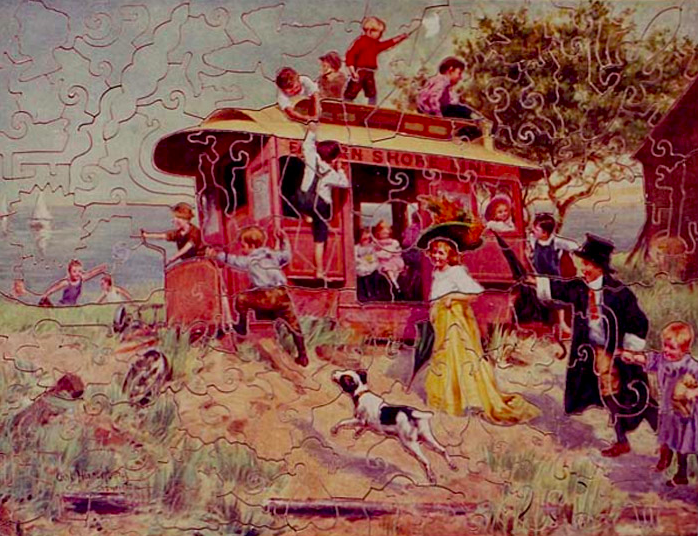 Photo: All Aboard from Bob Armstrong’s Parker Pastime Puzzle collection 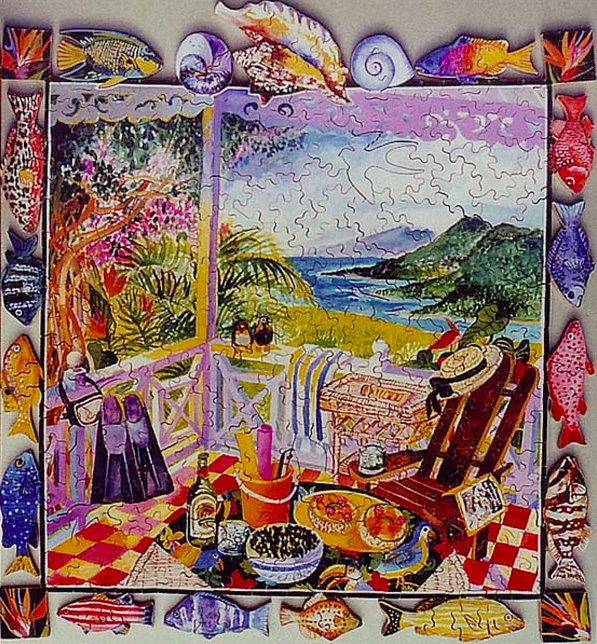 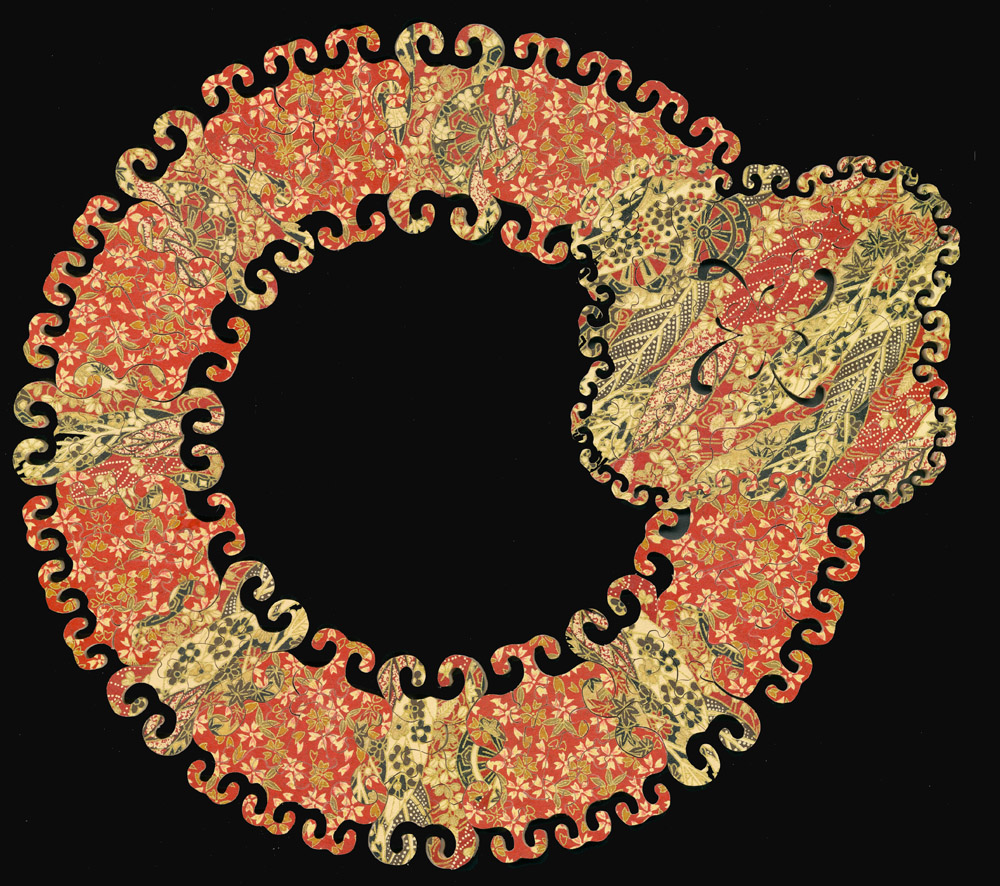 Photo: A Wreath of Music by Melinda Shebell, which can be assembled in two ways

Photo: A Wreath of Music by Melinda Shebell alternate assembly

On Friday, participants will honor the late puzzle cutter Pagey Elliot, who was one of the founders of the Puzzle Parley, along with collector/restorer/lecturer Bob Armstrong and jigsaw puzzle historian Anne Williams. For the Pagey Elliot Jigsaw Puzzle Exchange, each cutter makes 12 of the same puzzle — same image, same size, and same cutting style, although pieces do not have to be interchangeable among the 12 puzzles. The following five puzzles were all made for the 2012 Pagey Elliot Jigsaw Puzzle Exchange: 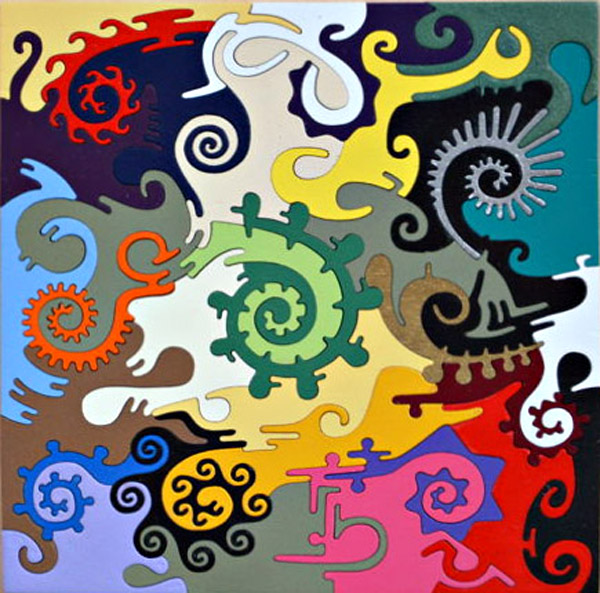 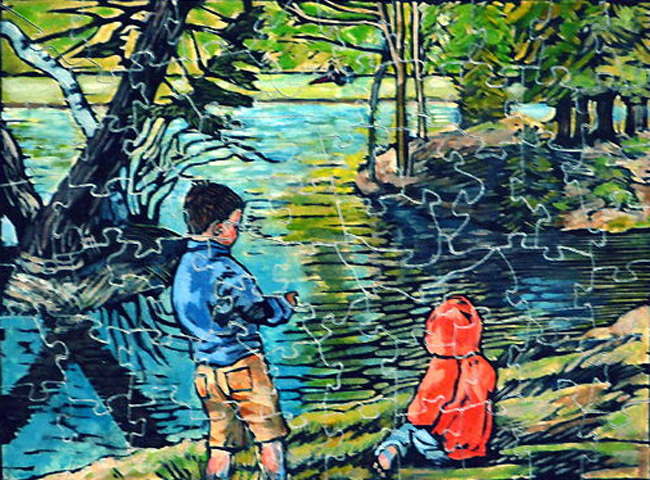 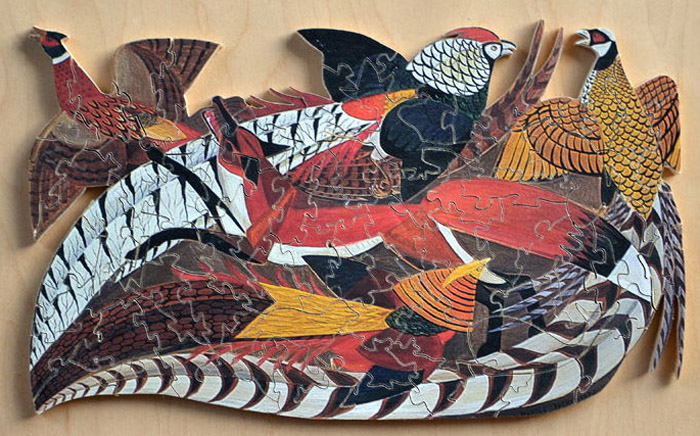 The weekend features puzzle displays, cutting demonstrations, a Yankee/White Elephant Puzzle Swap, and a Banquet on Saturday night, which includes a keynote by Steve Richardson of Stave Puzzles, today’s premier wooden puzzle company. There’s also a trip to see the First Church of Salem and the Parker family stained-glass window, with its special emphasis on game symbolism. And, of course, this extravaganza is hands-on — with puzzle assembling till the wee hours of the morning for those who are up to the challenge. The Sunday afternoon Puzzle Fair is free and open to the public. 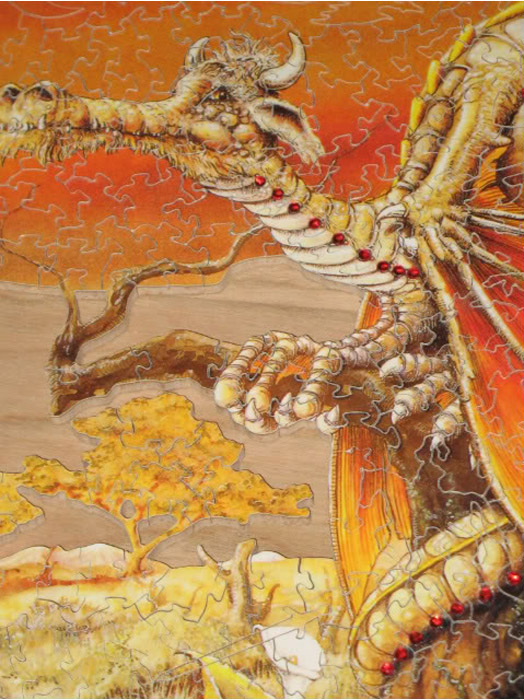 The Puzzle Parley takes place every other year, so catch it while it’s here. Whether you’re a puzzle novice or a buff, come browse, buy, sell, or sit down and add a few pieces to an old wooden treasure! Chances are, you might just find that special birthday present or family vacation jigsaw puzzle you’ve been looking for.
Sally Placksin is an award-winning writer and public radio producer.  Her books include American Women in Jazz, 1900 to the Present and Mothering the New Mother: Women’s Feelings & Needs After Childbirth. Her public radio shows include programs for NPR’s Jazz Profiles, documentaries for Columbia University’s Institute for Religion, Culture, and Public Life, and What’s the Word?, a fourteen-year series on language and literature. Sally is a jigsaw puzzle enthusiast and aspiring puzzle cutter. She is looking forward to attending her third Puzzle Parley.
Photo at the top: It Takes a Village by Shawn Ferguson