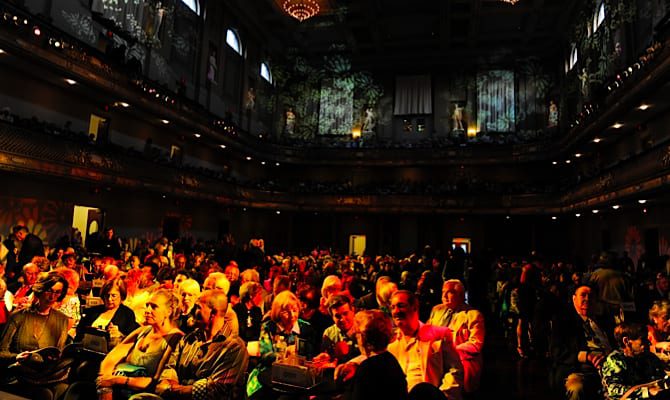 There is only one place you can hear the phenomenal variety and depth and even whimsy of American music performed in a single concert—and that’s at a Boston Pops performance in the incomparable setting of Symphony Hall.

The sound of the Boston Pops warming up for Opening Night is as sure a sign of spring as the crack of a bat at Fenway Park. Every season since the orchestra’s founding in 1885, New England residents and visitors sit with family and friends at cabaret-style tables and order food and drink, all while taking in the fun-filled atmosphere of music and entertainment presented by “America’s Orchestra.”
This spring, Pops patrons are treated to “The Very Best of the Boston Pops,” May 7-June 14, a season that showcases the orchestra’s phenomenal musical range. “The Very Best of the Boston Pops” season draws from the 3,400 titles in the orchestra’s library—music prepared by some of the best arrangers and composers from every generation. This vast collection—virtually all of which is the exclusive domain of the Boston Pops—includes everything from Beatles medleys, college fight songs, American songbook classics, film music, and Broadway scores for full orchestra, to jazz standards, full-length symphonies, sing-alongs for every occasion, and contemporary pop hits, as well as original works commissioned especially for the one and only Boston Pops Orchestra.
As a testament to the immensely varied musical entertainment on the Boston Pops stage this season consider the second week of concerts. Conductor Keith Lockhart and the Pops welcome American rock legend Warren Haynes and his critically acclaimed Jerry Garcia Symphonic Celebration to Symphony Hall on May 13 and 14. Then, with only a few days to rig trusses high above the Pops stage, these psychedelic concerts are followed by a Boston Pops collaboration with the aerial flyers, acrobats, contortionists, dances, jugglers, balancers, and strongmen in the visually stunning Cirque de la Symphonie on May 16 and 17!
Keith and the Pops also celebrate the 75th anniversary of The Wizard of Oz with performances of the score to the beloved film alongside a screening of the movie in three concerts, including two Family Matinees at Symphony Hall on May 10 and 11.
Highlights this season also include the Pops debuts of Tony award-winning Billy Porter (5/20 &21) Grammy- and Oscar-winning Melissa Etheridge (6/12 & 13), as well as a first-time collaboration with the New York-based jazz band sensation The Hot Sardines. Boston Pops Laureate Conductor John Williams returns for his annual Film Night Series (6/6, 7, 10, 11). In his Boston Pops debut, famed Star Trek actor Leonard Nimoy joins the orchestra led by Harvard-trained conductor Sarah Hicks as the distinguished host of the space-themed “Out of This World” concerts, May 23 and 24.
Whether you hear the Opening Night performance with Jason Alexander (May 7) or the season finale Gospel Night, featuring Grammy-award winning a cappella group Take Six, there is something for everyone at “The Very Best of the Boston Pops.” Tickets to the 2014 Boston Pops season, priced from $22-124, are available in person at the Symphony Hall box office, by calling 888-266-1200, or online at www.bostonpops.org.
Looking for a place to stay in the city after catching the Pops this season? For all things lodging across Boston and Massachusetts — everything from B&Bs, inns, hostels and hotels — visit www.massvacation.com/stay.
Photo by Stu Rosner.