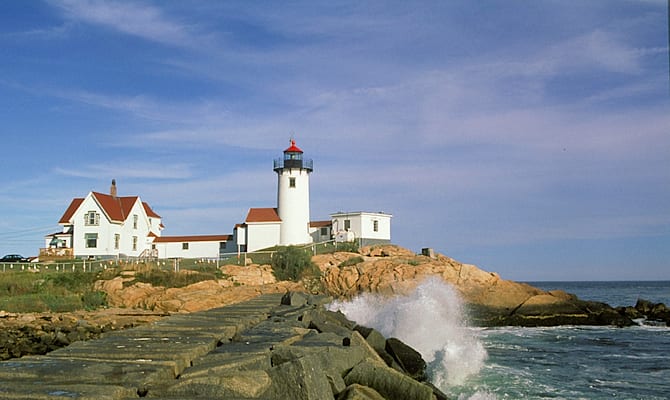 I stand on a rooftop facing east toward Gloucester Harbor; brisk autumn breezes and fresh salty scents lend color to the air of the moment. I can see far out to the Dog Bar Breakwater and Eastern Point Lighthouse, and still further beyond to the white diamond-studded sparkling sea. I see a single seagull arcing through the sky followed by hungry bevies chasing vessels, but it’s the view of the harbor’s inner beauty that causes me to standstill and absorb all that I see.
The beauty is in the mix of large fishing ships and smaller lobster boats powering through the water — coming and going — in and out to sea; the beauty is in the mix of flat-topped boxy ice buildings, the old Paint Factory, hipped-roof homes, and fish shed peaks; the beauty is in the mix of ships’ masts and riggings, hulls painted shiny red, ochre, and marine blue, new wooden docks and weathered wharf pilings, and everything playing to a soundtrack of gull cries and ships’ engines.
Surrounding the harbor is a blanket of golden hills, made rugged from granite outcroppings formed of earth’s crusty movement long ago, glowing golden from the angled sun’s light. Saffron tree ribbon circling the harbor runs into silhouettes of neighborhoods with bright sandy beaches that meet ultramarine water.
I turn to the west, and looking north and south are the densely packed rooftops of nineteenth- and twentieth-century gables, pitched in shapes and sizes manifold, their architecture mirroring the many cultures and centuries that have shaped this city’s skyline. 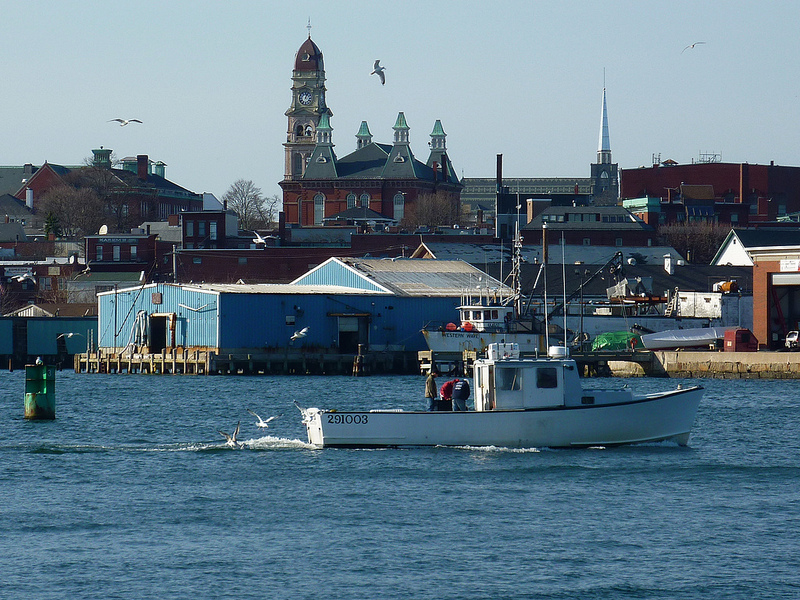 This is my adopted city, Gloucester. Like many New England cities and towns Gloucester has riches thought unique to their community, but unlike many hometowns Gloucester’s richly varied and thriving cultural community is grounded from the inside by a framework created from families long associated with her working waterfront. Abounding in maritime heritage, Gloucester is the oldest seaport in America; Gloucester is home, too, to Rocky Neck, the nation’s oldest art colony. 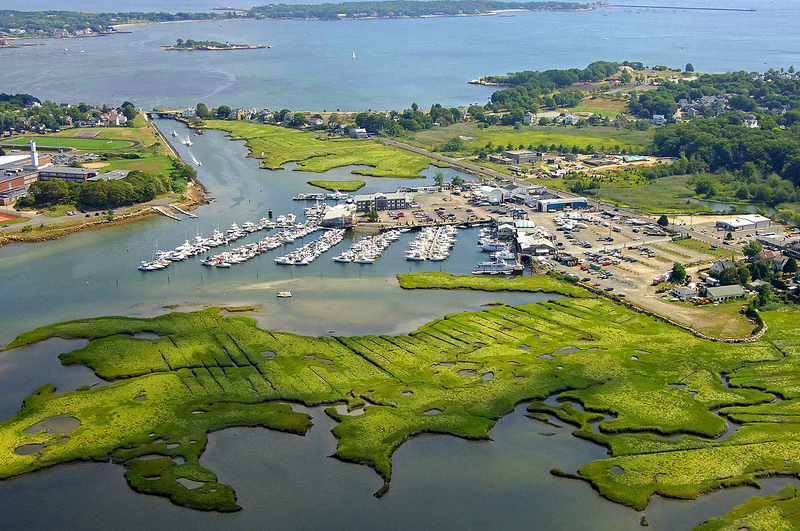 For over four hundred years her beauty and bounty have attracted fishermen and artists alike. Along with Rocky Neck, Gloucester’s Harbortown Downtown district is a designated Massachusetts Cultural District; Gloucester is the only city in Massachusetts to boast two such cultural districts!
Throughout the four seasons visitors from near and far travel to Gloucester to enjoy her beautiful shores, take part in her fiestas and festivals, dine on fresh seafood, meet her friendly people, and explore her arts, architecture, and entertainment.
You can tour her beautiful museums, historic homes, and walk Gloucester’s award winning HarborWalk. The lush butterfly gardens teem with native North American wildflowers, along with the resident and migratory species of birds and butterflies they were designed to attract. The granite story markers placed throughout the HarborWalk tell tales of Gloucester long ago. Although the Cape Ann Museum is temporarily closed for renovations, a few doors away is the Sawyer Free Library’s newly built amphitheatre. A block up the street is Savour Wine and Cheese, a unique shop where you can sample a daily selection of wines and cheeses from around the world. Next-door is Mamie’s Kitchen, a favorite of the local fishermen for their hearty home cooked breakfast and lunch menu. Head back toward the library and cross the street to enter Gloucester City Hall to view the WPA-era murals painted by Charles Allen Winter. A few blocks west from City Hall is the Sargent House Museum, a fine example of high-style Georgian domestic architecture, and also home to several works by Sargent family relative, John Singer Sargent. 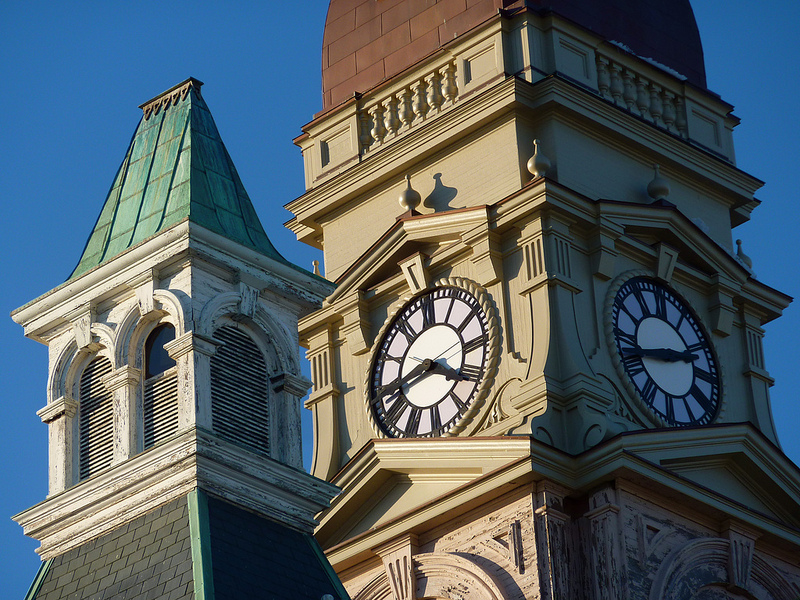 Walk down the front steps of the Sargent House and you will find yourself on Gloucester’s Main Street, crowded with shops, galleries, and restaurants. Several doors down is Bodin Historic Photo, a gallery of fine photos of early twentieth-century Cape Ann, printed from original glass negatives. Next door to Bodin is the quintessential vintage clothing store, Bananas. Proof of its great finds and reasonable prices, Bananas has been in business for over thirty years.
A few steps away from the Sargent House, you’ll find Passports Restaurant with their fresh-caught Captain Joe’s lobster and seafood, world famous and welcoming popovers, and exquisite wine offerings. Continue along Main Street and visit one of the neighborhood pastry shops and grocerettes for an espresso, Italian imported specialty items, or one of Virgilio’s temptingly tasty sandwiches on homemade Italian bread.
If it is for harbor side dining you are longing, head one block towards the waterfront to Rogers Street. Cape Ann Brew Pub offers burgers, seafood, and their house-made seasonal specialty craft beers, with an informal atmosphere suitable for children. 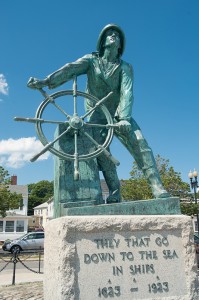 Cross Rogers Street heading back towards Main Street. You really must visit the gallery of renowned American realist painter Jeff Weaver. Like no other living painter today, Weaver has the inimitable ability to capture Gloucester’s working waterfront and exquisite Cape Ann light—the light for which she is so famous—the light that drew Edward Hopper, Childe Hassam, Milton Avery, Frank Duveneck, and many, many others to our shores—and kept them coming again and again.
Winter brings the holiday season when the shops are open during the evening hours and Gloucester’s Middle Street Walk takes place, with concerts and programs centered around historic homes. Stroll toward the east end of Main Street to see what has to be the world’s most unique lobster trap Christmas tree, trimmed with buoys imaginatively hand-painted by local children and artists.
Kim Smith is a designer, lecturer, author, photo/journalist, and documentary filmmaker. She is currently creating documentary films about the Monarch Butterfly, Black Swallowtail Butterfly, and Gloucester’s Feast of St. Joseph. Kim is the landscape designer for the award winning Gloucester HarborWalk Gardens. Visit her website for more information about design projects and current films: kimsmithdesigns.com. Kim is also a daily contributor to the stellar community blog, Good Morning Gloucester, and is the author/illustrator of “Oh Garden of Fresh Possibilities! Notes from a Gloucester Garden” (David R. Godine, Publisher).
Stay tuned for more on exploring Gloucester’s Harbortown Cultural District this spring from Kim Smith! You can also follow her on Twitter at @kimsmithdesigns.

For more on Massachusetts’ North of Boston region, including where to stay, eat, and explore, click here.