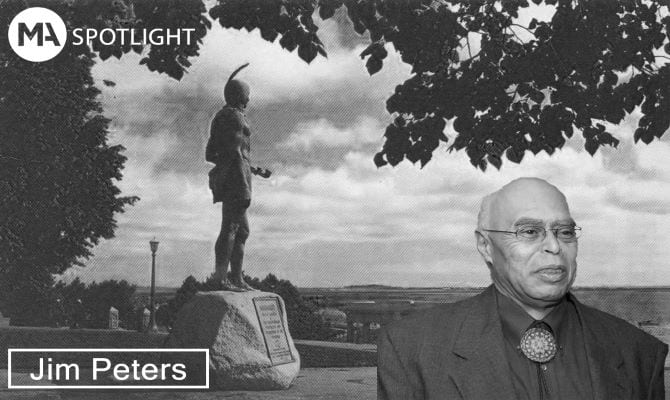 Tell us about your background and work on behalf of Massachusetts’ Native American community.
I was raised in Mashpee, one of the original Indian Plantations, established to protect us from the expanding Colonies.  Growing up in a community where just about everyone was related provided a sense of security and discipline, where if you did something wrong across town you could get scolded in the field and by the time you got home your parents already knew the story and their response. Participating in community endeavors such as hunting, fishing, planting and helping others was all quite normal, we just did it because it was necessary. It’s about family and it’s about Tribe.

My parents were gifted with a cultural commitment so participating in ceremonies, historic commemorations, our annual Pow Wow, as well as Aquinnah, Nipmuc, Narragansett and Shinnecock activities, to name a few, went without question and continues to this day.

My Great Grand Mother told me to never forget that we have a blood connection to this land. The water we drink and food we eat gives us that essence of one with our Mother Earth and that goes back thousands of years. Always have respect for all living things.  Over the years, I have met families of other tribes that have been given those same instructions.

After undergraduate school, I worked for the Mashpee Tribe, Narragansett, and Mashantucket Pequot and for the Commission on Indian Affairs for the past 20 years. How many Native Americans live in Massachusetts and where are they concentrated?
The 2010 US Census estimates 50 thousand Native Americans in Massachusetts. It appears that our population is so small and diverse it is difficult to accurately quantify.  The largest concentration is in the Greater Boston Counties of Norfolk, Suffolk and Middlesex. Mashpee and Aquinnah Tribes indigenous to Barnstable and Dukes County constitute the next largest populations. Plymouth and Bristol Counties have three urban centers – Brockton, New Bedford and Fall River – where many Wampanoag and other indigenous people have found affordable refuge. Worchester County is within the Nipmuc territory .   Now that the 2020 Census is upon us with new technology, we have to encourage our folks to make the effort to standup and be counted. It’s very important to our future generations. Thanksgiving celebrates the generosity of Wampanoags who helped the Pilgrims survive in the 17th century.  How do you prefer to spend Thanksgiving?
Giving thanks to all living things is a profound concept, particularly in a materialistic society. In my opinion, of all the American Holidays, Thanksgiving is the most important.  It’s a day that brings families and friends together to share the fruits of the earth and give thanks for the blessings they have received.
As for myself, since my cousin Frank James was denied an opportunity to share the plight of our people during the 350th Anniversary of the Mayflower, I generally pilgrimage to Coles Hill in Plymouth to pay tribute to all my relations, along with several hundred others who converge.  Frank termed this annual event “The National Day of Mourning,” a time to offer prayer and reflection on our plight as human beings past and present.

Tell us about the traveling exhibit, “Our” Story: 400 Years of Wampanoag History, which is an important part of the Plymouth 400 commemoration in 2020.
“Our” Story: 400 years of Wampanoag History was conceptualized, researched and produced by SmokeSygnals, a Tribal member-owned entity on Cape Cod.  This unprecedented traveling exhibit reveals little-known historic and cultural realities of the People of the First Light.  It portrays a number of historic points in our shared history that are rarely provided in America’s curriculum.   It is about the divergent realties of contradictive cultures and how we have evolved over the past 400 years of the colonization of America.  It is an important reflection on our shared history, certainly an appropriate opportunity to assess our past, present and envision what we are leaving for our future generations.  Coming full circle.