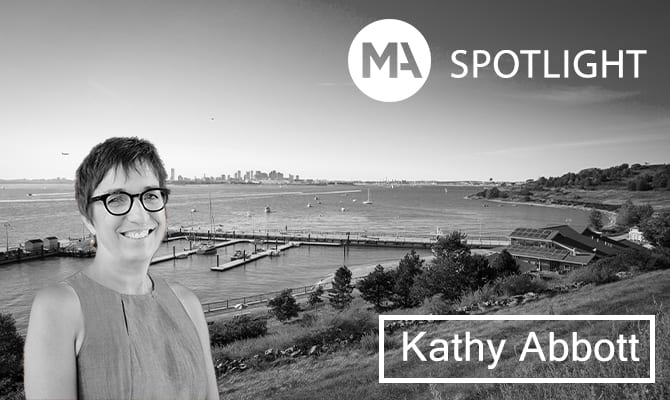 Kathy Abbott – Harbor Guardian
Thanks to the $4.5 billion Boston Harbor Cleanup and diligent community stewardship for 30+ years, Boston Harbor teems with cruise ships and cargo ships, ferries and fishing boats, and is enjoyed by tourists, students and residents alike. MOTT spoke with Boston Harbor Now President & CEO Kathy Abbott to learn more about her organization’s work along the waterfront.

Kathy, tell us about your career and how you came to lead Boston Harbor Now.
My career began as a 19-year old Park Ranger on Gallops Island in Boston Harbor, and has included leadership roles in creating the last master plan for the Harbor Islands as a state park; raising funds to develop, manage and market a new model National Park in Boston Harbor; and establishing the Department of Conservation and Recreation as a new state agency.

When I took on the role as the first president and CEO of Boston Harbor Now in 2016 – a non-profit created by the merger of the Island Alliance and Boston Harbor Association – it was a natural evolution in my career. Boston Harbor Now has a vision that is inclusive, integrated and aware of multiple recreational, economic development and environmental issues.

I have also worked locally and globally and volunteered nationally to advance the interests of urban parks as the Co-Chair of the City Parks Alliance. My experience as an executive and entrepreneur in government and nonprofits uniquely qualifies me to build upon the successes of our current waterfront renaissance. How do you engage tourists who want to check out the harbor?
Now that the Boston Harbor is among the cleanest urban harbors in the country, there is so much to see and do around the waterfront. As the official nonprofit partner to the Boston Harbor Islands National and State Park, Boston Harbor Now is tasked with helping to activate and promote the Islands and the Park. We are particularly focused on getting people out to Georges, Spectacle, Peddocks, Lovells, Grape, and Bumpkin Islands — highlights of the Boston Harbor experience.

We attract over 500,000 visitors annually to the Islands through a combination of earned and paid media strategies. We have partnered with the National Park Service (NPS) and the Massachusetts Department of Conservation and Recreation (DCR) to develop and manage the brand-new trip-planning Park website and collaborate on populating content for the Boston Harbor Islands social media accounts. This year, we piloted marketing through subway posters and public radio ads and tested the use of social media influencers to highlight the many unique features of the Park and our public programming. The Boston Harborwalk celebrates its 35th anniversary this year as one of America’s most resilient waterfront public spaces. How are you celebrating the occasion?
Each Saturday in October, Boston Harbor Now is exploring a different section of the nearly 40 miles of paths and parks that have been completed since the 1984 HarborPark Plan was released by the Boston Redevelopment Authority (BRA). These walks explore what makes each section of the Harborwalk, and the surrounding community, unique. Guest speakers from State agencies, the City of Boston, and local community organizations will also share their perspective of the Harborwalk history.

We are also hosting an event to recognize former Mayor Raymond Flynn and hear from former BRA director Steve Coyle, and honor the HarborPark Advisory Committee, including Lorraine Downey, former executive secretary of the Boston Conservation Commission. In addition, we will have a panel discussion about waterfront development and resilience with Michael Stevens (Washington, D.C.), Marshall Foster (Seattle), Vivien Li (Boston and Pittsburgh), and Amy Whitesides (Boston).

Though much of the Harborwalk is complete, much of it will need to be elevated and improved to protect against climate change and update older infrastructure. Just a few remaining waterfront parcels without maritime uses have yet to be developed. How do you work collaboratively with similar Bay State groups to address areas of mutual concern?
Boston Harbor Now works with the federal government, municipal government, state agencies, and local advocates around Boston Harbor from Salem to Scituate. The largest regional asset that we provide support for are the 34 Boston Harbor Islands in the National and State Park.

We recently led a regional water transportation study that looked at potential dock locations and new routes for ferry service, and ultimately released business plans for routes that include Boston and Quincy, while continuing to support and promote ferry service on the north and south shore.

We work with fellow nonprofits and federal and state partners like the Massachusetts Department of Environmental Protection (MassDEP), the Office of Coastal Zone Management (CZM), and the Department of Conservation and Recreation (DCR) on everything from municipal harbor plans to municipal vulnerability studies and coastal parks. Can increased water transportation help solve the congested roadways and let tourists, commuters and residents get around town more easily?
Water transportation is a great way to avoid congestion on roadways (or subways), see the city from a new perspective, and enjoy the many benefits of spending time out on the water.

The Fan Pier-Lovejoy ferry is a great example of a public-private partnership offering a new ferry service in Boston Harbor, and it’s one of many new services that have been implemented or planned in recent years. The Town of Winthrop provides ferry service from their town dock to downtown Boston, the Seaport, and Squantum Point in Quincy. The new Encore Boston Harbor Casino offers a water shuttle from the Seaport and Long Wharf to their docks in Everett.

We hope that a proposed Inner Harbor Connector and a direct route from Quincy to Boston can expand transportation choices and provide residents and visitors alike with an opportunity to take advantage of the harbor as they travel.