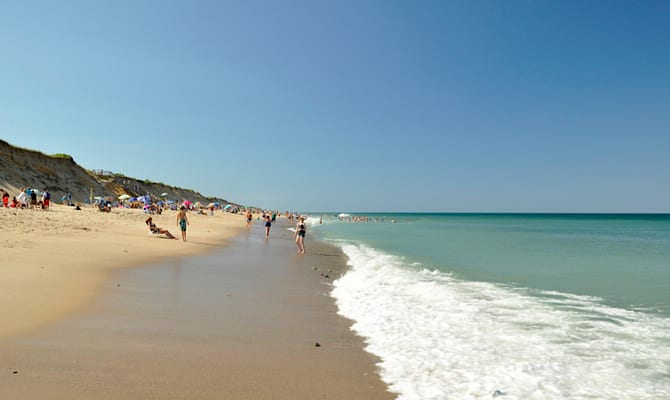 There are some people who would say that America found itself in the natural wonders of the East Coast; Melville, Hawthorne, Emerson and Whitman all drew inspiration from the lands and waters along the Northeastern coast. In particular, the lush woods and rivers of Massachusetts have provided many seekers with unequaled natural solace. Here are five destinations that nature lovers will want to visit:
Walden Pond
“I went to the woods because I wished to live deliberately; to front only the essential facts of life.” So wrote author Henry David Thoreau on his rustic, spiritually-awakening retreat to Massachusetts’ Walden Pond. For many, Thoreau’s legendary two-year sojourn into the wild is the cornerstone of the uniquely American philosophy we call transcendentalism. Thanks in part to the efforts of ex-Eagle Don Henley, the historic Walden has been preserved from development and relentless hyper-tourism.
A must for all interested in American literary history and thought, Walden Pond State Reservation is especially breathtaking in the fall, when the turning New England leaves provide a subtle explosion of colors. Visitors can take in the inspiring natural atmosphere that inspired Walden much as it was well over a century ago, and even see a recreation of the modest home in which Thoreau lived.
Natural Bridge State Park
Not far from the collegiate town of North Adams lies Natural Bridge, a sublime white marble arch carved by glacial melts over 10,000 years ago. A rock quarry until 1985, when the area was acceded state park status, Natural Bridge has, like Walden, been a source of inspiration for writers including Nathaniel Hawthorne. With water rushing below, you can learn about the natural forces that created this spectacular sight. On the same sight, you can also take in a man-made dam hewn from the same marble as Natural Bridge.
Arnold Arboretum
If your visit to Massachusetts is limited to Boston, and you still want to take advantage of the state’s floral majesty, there’s an easy alternative. Designed by Frederick Law Olmstead — the man who designed Central Park — Harvard’s Arnold Arboretum is a wealth of close to 15,000 different species of plants, including birch, bonsai, hemlock and more. Open during daylight hours 365 days per year with free admission, Arnold Arboretum is a perfect escape from the city — within the city.
Cape Cod National Seashore
Another locale admired by Thoreau, this expanse of beaches along the Atlantic is the largest continuous beach on the East Coast, and offers sundry natural treasures. Swimmers and surfers will not be disappointed and sightseers will be sated with the Cape’s towering sand dunes.
In addition to the natural splendor, visitors won’t want to neglect Cape Cod’s array of lighthouses (some defunct and seven still in operation) and Marconi Station, a truly historical site from which the Italian visionary Guglielmo sent radio transmissions in the early 20th century.
Monomoy National Wildlife Refuge
Established as a protected area for migratory birds during the end of World War II, the island retreat of Monomoy is recommended for animal lovers eager to see the feathered flocks who visit the sites marshes, dunes and beaches. Comprising three distinct isles, the refuge can be reached by ferry, private boat and in some places, by car.
No matter what kind of interaction with nature you prefer for your summer travel deals— crashing waves, moody woods, or awe-inducing rock formations — the bounty of Massachusetts will provide.
Marcela De Vivo is a freelance writer from California who specializes in travel, marketing and health. When she needs to take a vacation from running her company, Gryffin Media, she enjoys reconnecting with nature through the practice of yoga.
Photo: Cape Cod National Seashore by William DeSousa-Mauk