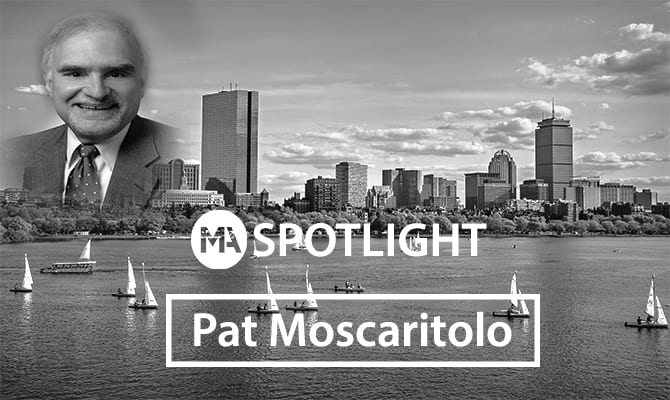 Tourism Chief Traveling On
GBCVB President & CEO Patrick Moscaritolo retires in February 2019 after a distinguished career in travel and tourism, during which he helped position greater Boston as a leading visitor destination in the United States, and indeed, around the world.  We spoke to Pat about his career and the changing tourism industry.

Congratulations on a successful career Pat. Tell our readers about your background and how you got into government.
I grew up in the Orient Heights section of East Boston and still live today in that same house. I attended Boston Latin School and Boston College where I received my degree in Economics, followed by a Master’s degree at the London School of Economics in 1967.  I taught undergraduate political economy at the State University of New York for three years until another Latin School graduate, Fred Salvucci, got me interested in community economic development. I went to work for my fellow BC classmate Lt. Governor Tom O’Neill and ran the Mass Office of Federal State Relations in Washington DC for the Dukakis Administration. There, I worked with the Governor’s cabinet secretaries and the MA congressional delegation on transportation and economic development policy initiatives and federal economic development grants.

A key issue I worked on was the 1978 Airline Deregulation legislation where I worked very closely with Massport CEO Dave Davis.  In 1979 Dave recruited me to come back to Boston to run Massport’s Community, Legislative and Public Affairs Departments, and a few years later he appointed me Deputy Executive Director and Logan Airport Director. 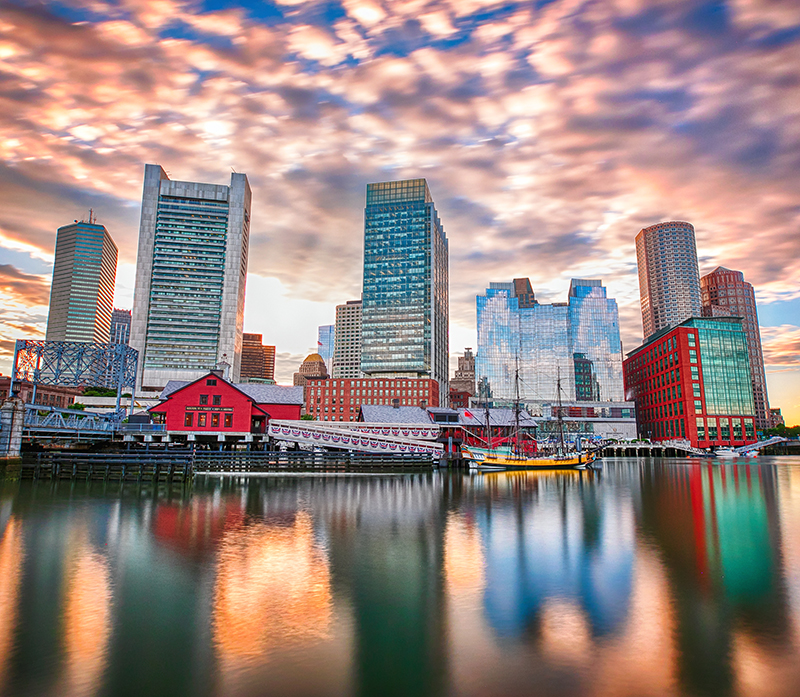 How did you help develop international travel at Logan Airport?
As Logan Airport’s Director I created a marketing department to focus on developing new nonstop international routes from Europe to Boston and a unique customer services initiative called ‘Airports Are for People Too.’  I spent a significant amount of time on route development because unlike today with Open Skies agreements, in the 1980s international route decisions were governed by bilateral treaties between the US and European transportation officials.

To build political support for our international route initiatives we created a private sector regional organization called New England USA which later became Discover New England (DNE).   Under this banner, I attended international tradeshows such as World Travel Market, ITB, IPW and FITUR to promote Boston and the region. We successfully convinced the US State Department to negotiate treaties with European countries that led to nonstop service to Boston from Brussels, Rome, Milan, Paris, Frankfurt, London, Dublin, Glasgow and Edinburgh. These new air service routes produced dramatic growth in international visitors and significant growth in international visitor spending and jobs.

As part of this effort, I created an Airport Hospitality Advisory Committee to further develop Logan Airport’s concessions policies, which led me to work with hospitality leaders like Tom Kershaw and Francois Nivaud. That group of hotel and restaurant committee members convinced me to take on the challenge of running the Greater Boston Convention & Visitors Bureau. In February 1991 I was elected as President & CEO Greater Boston CVB. 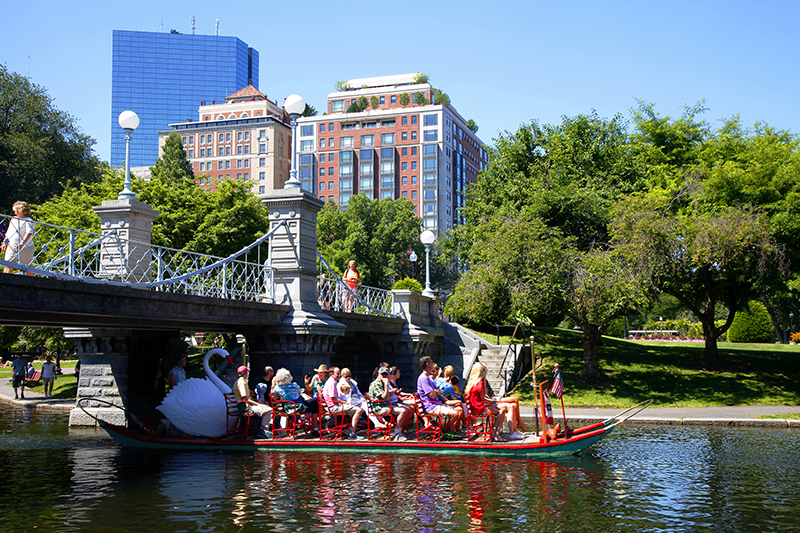 It takes a village to successfully market a destination.  Talk about the Bureau’s partnerships and how collaboration translates into a successful Boston brand.
To me partnerships and collaborations are the true ‘breakfast of champions.’ When I took over the Boston CVB in 1991, the budget was $2.2 million with less than 375 companies as members.  I remember saying back then that while other CVBs might outspend us, no CVB would outwork us or outthink us. By that I meant it doesn’t matter how many dollars flow through the Bureau’s books; what matters is the amount of total dollars you and your partners can commit to marketing initiatives and sales campaigns.
Here’s a good example of what I mean. In 1992 Boston was bidding to host the 1994 World Cup. The entrance fee to submit a bid to FIFA was $190,000, an unheard of amount of money back then.  No one in our bidding group had that kind of money.

I met with Francois Nivaud, then managing director of the Boston Harbor Hotel, to discuss a game plan to raise funds.  Francois suggested we pitch Boston hotel general managers to contribute to this initiative.  Fortuitously for me most of the GMs were European-born and they recognized the short and long term benefits for our visitor industry of hosting World Cup.  By partnering with the Boston hotels and a few local businesses and convincing my colleagues at Logan Airport to contribute $50,000 we cobbled together the $190,000.  A year later we won the bid to host five World Cup matches at Foxboro Stadium in 1994. While I didn’t fully understand the game of soccer, I did understand economic impact and the power of branding a US destination globally through a worldwide sporting event.  After hosting World Cup matches in 1994, overseas visitation to Boston grew by 50% over the next five years as the Bureau marketed Boston as a ‘must see’ US destination across the globe.

We replicated that partnership model for other successful bids including the MLB All Star game in 1999, the Ryder Cup in 1999, the Democratic National Convention in 2004, the NCAA Women’s Final Four in 2006 and the NCCA Lacrosse Championships.   For the Lacrosse bid we partnered with Harvard University and the Kraft Group to bid on an event that had never been north of Philadelphia. Our dream team of presenters blew away the competition from three other cities and we were awarded two consecutive years of Championship games. Through our marketing promotions we set an all-time record attendance in 2008 and as a result the NCAA awarded us three more Championship games for 2012, 2017 and 2018.
Another great example is our ongoing collaborations to attract visitors from China. Working with MOTT, Brand USA, Expedia, Boston hotels and attractions, we were one of the top three destinations by market share growth in drawing visitors from China in 2017.  These collaborations are especially important today to draw international visitors and international meetings to Boston. 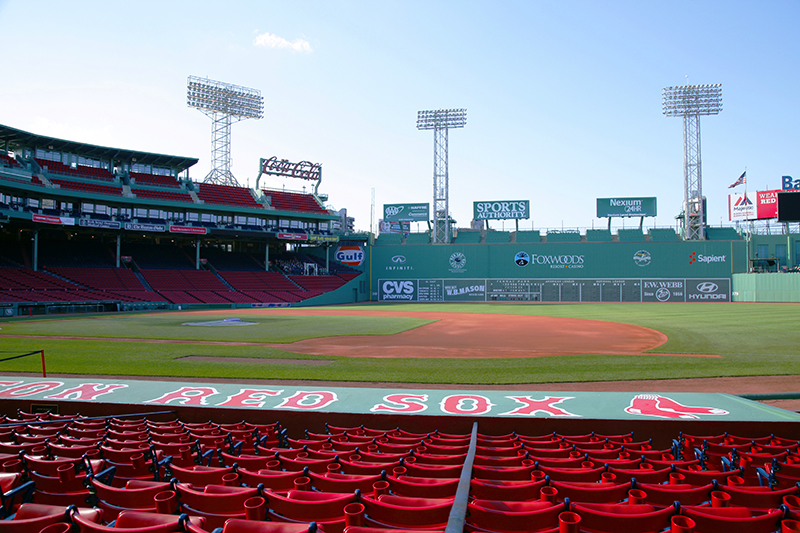 What are your plans post- GBCVB in terms of staying engaged in the tourism and hospitality community while enjoying your new freedom?
I know I’m leaving the Bureau in good hands with the newly appointed Martha Sheridan, along with a strong and active Board of Directors and a robust membership roster of 1,350 members. So I’m ready to make this transition.

Our first year will most likely involve splitting our time between Denver and Boston. Our son and his family are in Denver and we are looking forward to being involved with him and his wife and our three grandkids. I will stay involved with a few community based organizations in Boston to help out wherever I may be needed. I am trying to structure my retirement as less than a walking away from the action and more about being laser focused on the actions that matter deeply to me.
My wife laid out for me “Liz’s Rules of Retirement” which are the following:   1) I am out of the house every day by 6:30 a.m. like I am now 2) I don’t come home before 10 p.m. two of the five days like happens now 3) I attend events a few  nights a week where I have dinner at the “end of a stick”  at some reception  like I do now and 4) I spend weekends working around the house rather than going to a black tie dinner.

Thanks Pat and Best Wishes!