From major venues that attract notable stars both nationally and internationally to local puppet shows for the kids, Massachusetts boasts a rich heritage of outstanding theater — and that tradition continues today.
Just outside of Boston, along the grounds of one of the nations most prestigious universities, Cambridge is home to the American Repertory Theater (A.R.T.), a leading force in American theater that’s dedicated to expanding the boundaries of theater.
Founded in 1980 by Robert Brustein, A.R.T. stands as the recent winner of the 2012 Tony Award for Best Musical Revival (The Gershwins’ Porgy and Bess), and is now under the artistic direction of Diane Paulus.
Having welcomed an assortment of major American and international theater artists across its 32-year history, A.R.T. presents a truly diverse repertoire.
Currently on stage through October 28 at the OBERON, The Lily’s Revenge boasts an epic combination of theater arts with a cast of over 30 local Boston performers.
Written and conceived by Taylor Mac, composed by Rachelle Garniez, and directed by Shira Milikowsky, The Lily’s Revenge, as the A.R.T.’s Artistic Director Diane Pualus puts it, is an “incredible, theatrical epic.”

Described as an unforgettable allegory for love without boundaries, The Lily’s Revenge features an eclectic mix of dance, film, theater, and music into five unique acts. 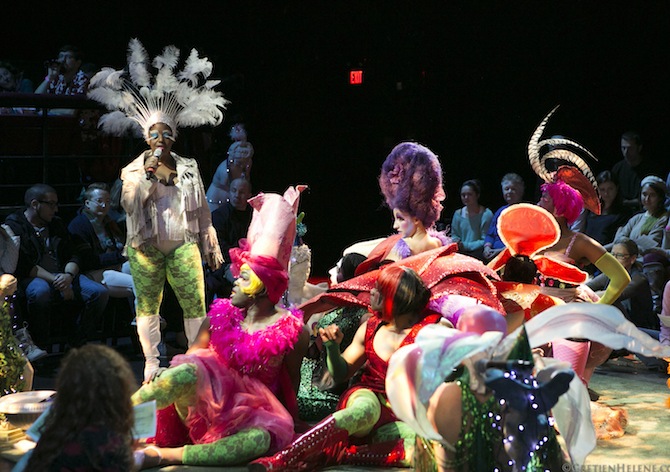 “The Lily’s Revenge offers so many incidental pleasures that theatrical time — always a curiously malleable element — seems to contract. To my happy surprise, I emerged from The Lily’s Revenge more refreshed than exhausted.” – Charles Isherwood, The New York Times
For those planning to attend, the production is recommended for ages 16 and up, due to sexual themes, nudity, and strong language.
With select nights still available, tickets can be purchased online for $25 and $55, or by calling the Box Office and A.R.T. Info Line at 617-547-8300.
For more information on the A.R.T., you can visit www.AmericanRepertoryTheater.org, or head to their Facebook page and find them on Twitter @americanrep.
To discover more about Massachusetts’ robust theater scene, head to www.massvacation.com/arts.
For an in-depth look at Cambridge’s wonderful lodging options, click here.