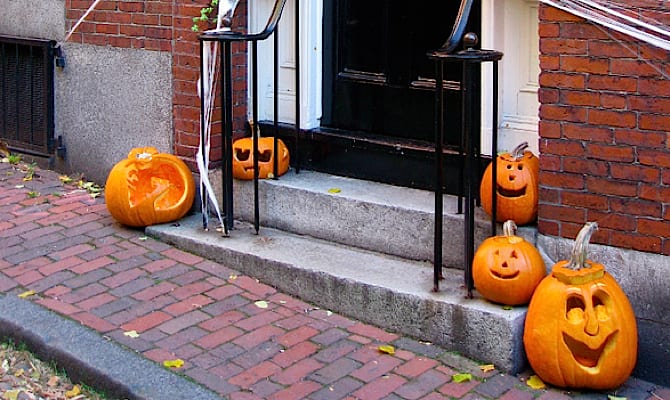 Massachusetts is the capitol of Halloween because we have Salem, but there’s also so much more to do. Here are some scary destination ideas for adults, and some for kids, too!
A visit to Salem
On the North Shore, Salem adds dozens of special events in October to their year-round tours and museums — and you can reach them on the commuter rail!
Watch an outdoor movie on Salem Common, follow a reenactment witch hunt in Salem’s Pioneer Village, see a spooky play in the House of Seven Gables based on Nathaniel’s Hawthorne’s book, or watch a reenacted witch trial in Cry Innocent. It all ends with fireworks on Halloween night. I also recommend the Haunting of Hammond Castle on the North Shore in Gloucester.
A real submarine
Closer to Boston, did you know there’s a real submarine you can tour in Quincy? The USS Salem is turned into a haunted ship for Halloween, and they havespecial non-scary kids days, as well. If you don’t drive, it’s right off the bus line along Washington Street.
Another spectacular attraction that’s close to Boston is Barrett’s Haunted Mansion, on the South Shore, in Abington, MA.
Cornfield mazes
What makes a corn maze better? Trying to solve it at night as lurking creatures wait for you! Near Worcester, my favorite has to be the Davis MegaMaze’s Halloween Fright Nights; during the day the Maze is suitable for kids. There’s also a farm and petting zoo with apple picking across the street.
In the Springfield area, Mike’s Maze at Warner Farm is also open for the season featuring eight nights of terror in a cornfield.
All across the state
Farther afield, I recommend the Harvest of Horrors on Cape Cod, which includes a unique mixture of action and humor in an eerie, live stage show along with a haunted house. North of Boston, in Haverhill, there’s the Cataclysmic Castle of Fear, which includes carnival rides. Or make it triple-threat in Fall River at the Asylum of Horror, which is notable for taking it to “the next level in ultimate horror,” the Factory of Terror, which features three frightening attractions, and the Haunted Rail Yard, which supports The Old Colony & Fall River Railroad Museum.
Out west, I love the Haunted Hay Rides at McCray’s Farm. And in the Berkshires, The Mount, the historic home of author Edith Wharton, offers spooky tours and a reading of ghost stories.
Too scared? Go with a group of friends. You can even bring a mask and try to scare the people waiting in line!
Johnny Monsarrat writes Events INSIDER, an events source featuring an array of movie, theatre, and music events and shows. Check out his Facebook on Boston events, and his Tweets on what to do in Boston and beyond.