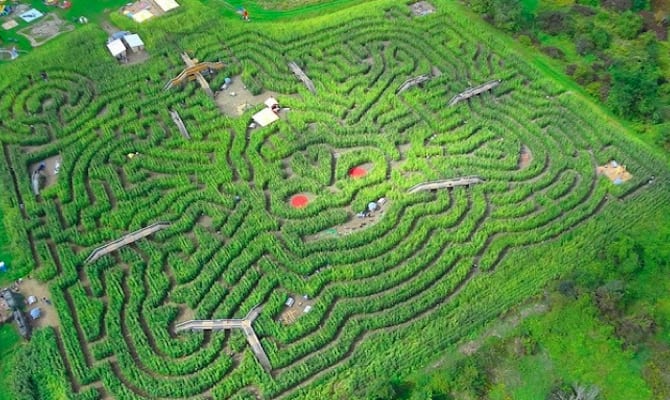 In Massachusetts, we don’t like to see summer go, but we look forward to the fall. We own the capitols of Halloween, Thanksgiving, and fall foliage. And we’re also the capitol of cornfield mazes! Our state has dozens of farms that are open to the public, most with the opportunity to pet animals, and go for a stroll.
Davis Farmland & MegaMaze
With its 3 miles of pathways, Davis Mega Maze in Sterling (near Worcester) is the most popular of the cornfield mazes. They add wooden bridges that you can walk over and under, which makes the maze more tangled — and you’ll find surprises inside like slides, obstacle courses, and carnival games. Across the street, their farm has been turned into a surprisingly large amusement park (bring kids to enter), where you can pick apples, take a hayride, pet animals, and race go-carts. The staff couldn’t be nicer!
Night Mazes
Including the Davis Mega Maze, a number of mazes have nighttime hours, and it couldn’t be nicer to stroll under the stars. The Kimball Farm Corn Maze in Haverhill runs day and night mazes that become haunted in October. Costumed characters lurk the maze to jump out and surprise you. Don’t bring small children, but it’s great fun for everyone else! You can also visit the farm animals, enjoy hay and pony rides, and try the giant slide.
Also north of Boston, Connors Farm in Danvers features raspberry and apple picking fields, as well as a haunted cornfield, and “singles nights.”
Mazes All Over the State
Elsewhere, you can find mazes at Hanson’s Farm and Schartner Farms in the Metro West region, Mike’s Maze at Warner Farm near Springfield, Goss Farm near Lowell, Sauchuk Farm on the South Shore, and Marini Farm on the North Shore.
So What’s the Secret to Corn Mazes?
Don’t worry about where you’re going. Just pay attention to where you’ve been; try not to backtrack, and you will eventually pop out of the maze. Best of all, go with a group of friends, and make it a race. Mazes take 1-2 hours, so bring sunglasses and sunblock. And they aren’t friendly to dogs. If there’s been recent rain, wear boots because the field might be muddy. Don’t just sit around this weekend. Get out and have some fun!
Johnny Monsarrat writes Events INSIDER, New England’s largest source of festivals, with 4,000 outdoor summer movie, theatre, and music events and shows. Check out his Facebook page on Boston events, and Johnny Monsarrat consulting online.