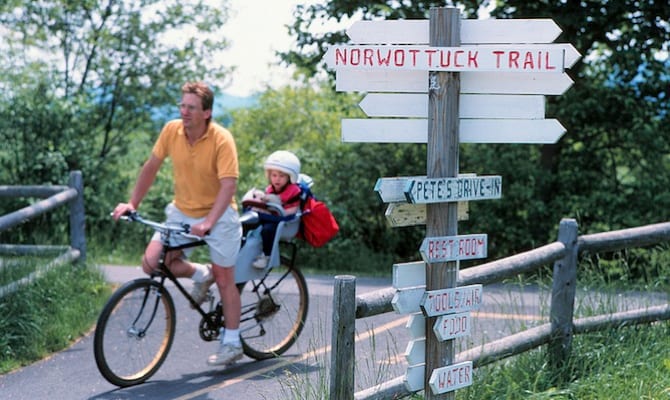 Today’s MassFinds guest blogger, @SeaFeezle, is an aspiring journalist and anthropologist studying at the University of Massachusetts. Check out this fun and informative video that she produced to go along with today’s post:

Wind whistling past the ears, hands gripped tight on handlebars, and sidelines blurred in a mass of farmland in motion – it can be none other than experiencing the Norwottuck Rail Trail!

Yet another western Massachusetts gem, the Norwottuck (Nor wah’ tuk) Rail Trail is an eleven mile paved path linking Northampton, Hadley, Amherst and Belchertown along what used to be the Boston & Maine Railroad.
Located in the bucolic and breathtaking Central Connecticut River Valley, the trail is enjoyed by walkers, joggers, skaters, wheelchair users and cyclists, weather-permitting. In winter months, cross-country skiing is a popular option for those needing a rail trail fix.
Derived from the Native American term for the area meaning “in the midst of the river,” you surely are just that while exploring the Norwottuck Rail Trail. Twisting gradually by expansive farmland and residential neighborhoods to the edges of college campuses and state parks, the level trail provides a safe, healthy and fun outdoor activity for every age and all levels of exercise.
Getting to where you’re going is only part of the adventure. Feel like shopping at local businesses? Grabbing a quick Polish bite to eat? Taking a scenic breather on picnic tables, large rocks, in a grassy field, or on a college campus? All can be accomplished directly off the trail at access points and outlets sprinkled along the path. Think of something, and it’s most likely a short bike ride away off the beaten trail.
The rail trail is as rich in activity as it is in history. According to the Department of Conservation and Recreation, the rail trail follows the railroad built in 1887 by the Central Massachusetts Railroad Company, connecting Boston and Northampton. Passenger service continued until 1932, declining as the popularity of personal transportation rose, and freight service continued until 1979. The abandoned property was acquired by the DCR in 1985, and in 1993 was developed into a recreational trail, making it the 495th rail trail in the United States.
As for as the condition of the trail at present, it remains to be a comfortable ride though it’s been scheduled for repairs for years. If there’s one thing rail trail users wish for, it’s for a smoother ride, as tree roots and cracks in the pavement make for minor discomfort in some areas. Also in the pavement of the Norwottuck Rail Trail are recycled glass pieces, adding a beautiful, sparkly touch on sunny days, but puncturing the occasional tire due to a mistake made in the initial melting process. Once these issues have been resolved, the rail trail can truly go from great to perfect.
For a day, an afternoon, or a weekend, grab your bike and outdoor spirit and come experience the beautiful Norwottuck Rail Trail in Hampshire County! There’s nothing like losing yourself in a western Massachusetts moment, however fleeting.
Chelsie Field is an aspiring journalist and anthropologist studying at the University of Massachusetts, and is always looking for her next adventure. She grew up in Shelburne Falls (“A wonderful place to live and grow and breathe”), loves the written word, and the outdoors. Keep up with her adventures in journalism by following her blog and on Twitter @SeaFeezle.