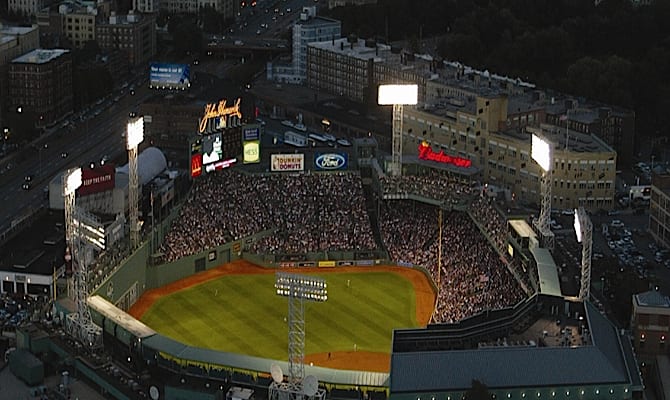 No state is crazier about its sports teams than Massachusetts. Even if your rooting interests aren’t for the local teams, it’s easy to get swept up in the state’s passion for spectator sports. No matter if you’re a bandwagon jumper or a die-hard fan, don’t miss these 10 spectator sports options this summer:
1. Fenway Park. Boston’s baseball cathedral is celebrating its centennial this year, and special events are planned throughout the season. Even if you can’t get a ticket to a Red Sox game, tours of the ballpark are held daily. Or check out the stars of tomorrow at the Futures at Fenway doubleheader, featuring Boston’s minor league affiliates, on Saturday, August 18th. Family-friendly ticket prices start at just $5.
2. Minor League Baseball. Catch the boys of summer playing at affordable, family-friendly minor league ballparks. Down on the farm, you’ll find future major leaguers and wacky promotions. Check out the Worcester Tornadoes of the independent Can-Am League and the Lowell Spinners, a Single A affiliate of the Boston Red Sox.

3. Cape Cod Baseball. The amateur Cape Cod Baseball League is a baseball purist’s dream. There’s no better way to savor the summer than to head to one of the Cape’s intimate ball fields, spread out a blanket, and listen to the thwack of the mitt and the crack of the bat under the setting sun.
4. Patriots Training Camp. The New England Patriots will return to the gridiron in late July as training camp opens at Gillette Stadium in Foxborough. It’s a great way to see Tom Brady and his teammates up close. Admission and parking are free, and the players are accessible. Pats fans should also take a trip through the team’s history at The Hall at Patriot Place.

5. Soccer time. Massachusetts offers plenty of chances for soccer fans to get their kicks. The New England Revolution take on Major League Soccer opponents at Gillette Stadium in Foxborough, while the ladies of the Boston Breakers take to the pitch at Somerville’s Dilboy Stadium. Also, on July 25, European powers Liverpool FC and AS Roma will square off at Fenway Park.
6. Sports museums. Inside Boston’s TD Garden, The Sports Museum is full of interactive exhibits and memorabilia dedicated to the region’s sporting history. Currently under renovations, The Sports Museum will be back in action this October. Till then, check out both the Naismith Memorial Basketball Hall of Fame in Springfield, and the Volleyball Hall of Fame in Holyoke – both featuring the world’s greatest basketball and volleyball players and coaches.

7. Head to the track. Suffolk Downs may be the best sports bargain in Boston. Admission and parking is free, and fans who place a winning wager may actually make money! Plainridge Racecourse in Plainville also features harness racing.
8. Boston Cannons. Lacrosse fans can head to historic Harvard Stadium, which dates back to 1903, and catch the Boston Cannons of Major League Lacrosse.
9. Boston Lobsters. Watch tennis stars such as Lindsay Davenport, Martina Hingis, and John Isner as the Boston Lobsters take to the court in Middleton throughout July.
10. Deutsche Bank Championship. The PGA Playoffs come to the TPC Boston Golf Course in Norton on Labor Day weekend. As summer comes to a close, watch golf’s biggest stars and take a peek inside the Massachusetts Golf Museum.
Christopher Klein is a freelance writer and author of The Die-Hard Sports Fan’s Guide to Boston (Union Park Press, 2009), a 270-page book that combines Boston’s proud sports history with insider tips for catching the action in 25 different spectator sports. The book is available online (on Amazon and Barnes & Noble) and in bookstores across Massachusetts. Christopher Klein is also the author of Discovering the Boston Harbor Islands (Union Park Press, 2011). To learn more, visit his website or follow him on Facebook.
For a complete listing of all things sports in Massachusetts, check out the Massachusetts Sports Office, featuring a full listing of sporting events and activities for folks of all ages and interests.