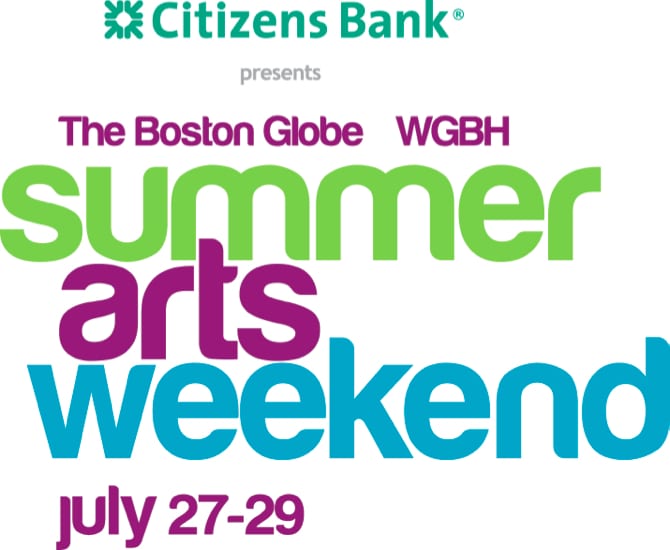 It’s July! Can you believe it? The summer is officially in full-swing, and it’s time to feature our Find of the Month – if you’re looking for the ultimate weekend of arts, music, and city festivities, look no further than the Boston Summer Arts Weekend!
From July 27-29th, The Boston Globe and WGHB will host the first-ever Summer Arts Weekend, presented by Citizens Bank; bringing a dynamic variety of arts to light, festivities will showcase the thriving local arts community, while also bringing renowned national artists to the center of the stage – ultimately, allowing Bostonians to experience a vast range of music, theater, and art offerings.
With the majority of the three-day festival taking place in Copley Square, free concerts –ranging from jazz, bluegrass, folk, and Celtic – along with street performers, and an array of food vendors, food trucks, and local artists will encompass the historic Back Bay area.
Not to mention, a collection of surrounding bars and restaurants will be offering discounts and specials, while also acting as Festival Clubs (more info on deals will be released as the weekend approaches on their site).
As of right now, the entertainment for Friday, Saturday, and Sunday has been announced (with more artist announcements on the way) – so, here’s a glimpse at the canvas ahead:
Friday, July 27th:
Sierra Hull & Highway 111: A recent Berklee College of Music graduate, Sierra Hull was deemed a bluegrass prodigy at the age of 12. She was Berklee’s first-ever Presidential Scholar for bluegrass.
Preservation Hall Jazz Band: This New Orleans institution has been playing strong for over 50 years, bringing a special breed of Bayou blues to new generations.
Del McCoury and guests: An essential part of the American bluegrass scene for more than 50 years, Del McCoury has been credited with bringing bluegrass to the music forefront in the ‘90s.
Irma Thomas: The Soul Queen of New Orleans, Irma Thomas has been performing since the late ‘50s.
Saturday, July 28th:
Dan Zanes and Friends: Notable for their family-friendly music, this Grammy Award-winning group has been playing for more than a decade. The group will also collaborate with African music groups.
Poncho Sanchez: This musician fuses Latin, jazz, and blues into his music.
Soul Rebels: Known for their fresh spin on traditional brass sounds, Soul Rebels spawned from the famous New Orleans band, Dejean’s Young Olympia Brass Band.
Suzanne Vega: This singer-songwriter will reinterpret her music for an acoustic-only performance after performing eclectic folk for more than 20 years.
The Low Anthem: A multi-instrumentalist folk band that has worked with major artists like Bruce Springsteen and the E Street Band.
Sharon Shannon Band: Featuring traditional Celtic music with a contemporary flair.
Sunday, July 29th:
Baroque Brunch with the Handel and Haydn Society: Kicking off Sunday’s events, the Handel and Haydn Society will feature a Baroque brunch.
Anderson & Roe: Known for taking classical music and giving it a funky edge, and also transforming popular hits into piano pieces.
Igudesman and Joo: Both artists are known for bringing a theatrical flair and fun approach to all of their performances on and off stage.
Alison Balsom: This trumpeter won the Female Artist of the Year at the 2011 Classical Brit Awards.
Boston Landmarks Orchestra: The Boston Landmarks Orchestra is a professional orchestra dedicated to making great music available for free to all Bostonians throughout the summer.
For those looking for more of an intimate setting, check out the Festival’s “After Hours,” featuring late night performances of all kinds from some of the main stage artists.
Stay tuned for more updates as the Festival approaches!
To stay up-to-date with weekend updates, artist’s announcements, and deals, make sure to check back regularly to their website here. And for all things Summer Arts Festival on Twitter, make sure to use #bossummerartswknd.