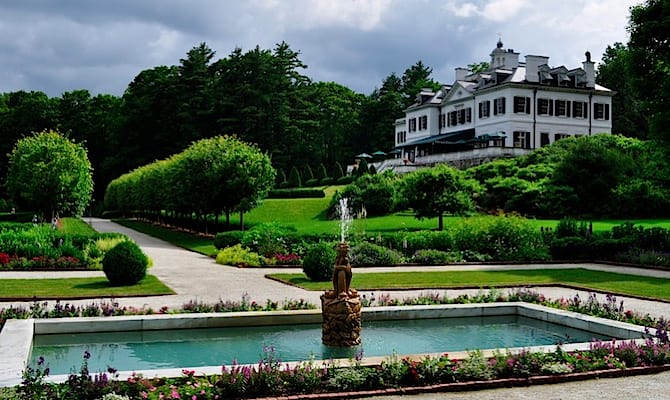 Edith Wharton’s book, The Age of Innocence, was such a hot topic book with my reading group last year that we went out and got the Scorsese movie. The group, a dozen or so professionals and theater professionals (some retired), watched in a silence unusual to the otherwise feisty females. This year, we read Ethan Frome and debated at length about the women Wharton depicted.
As luck (or deliberate timing by the organizer) would have it, we discussed Ethan Frome during the week of Wharton’s 150th birthday in January. Since a girl only turns 150 once, The Mount, which Wharton designed (including the gardens) and lived in from 1902-1911, has been the location of some birthday celebrations, as well.
During the summer, the lovingly restored mansion on Plunkett Street (just off Route 7, in Lenox, Massachusetts) has no remote relationship to the bleak isolation that Wharton casts for her characters in Ethan Frome’s Starkfield, Massachusetts. Wharton turned out to have been the center of a love triangle herself, which has come to light only in recent years, because the quiet and discretion of a lady raised in New York Society kept her in check, notwithstanding her world travels and 40+ books authored.
The Mount is a study in restraint – three gardens, but beautifully managed. Both she and her husband had two room suites, but there were only two guest rooms. The library is magnificent, particularly so when ownership of books was considered an exclusively wealthy privilege.  Some of the books have never had the leaves cut, because Wharton had bought, but not yet read, them (she read most, though). Perhaps most impressive is the fact that the book-lined walls of the library represent only half of Wharton’s collection – Ann, our very able docent, noted that the library had been divided between two godsons of the childless Wharton, and one of the godsons lost his collection in a fire during the blitz.
So, what befits a path-breaking, Pulitzer Prize-winning, marriage fleeing, world travelling woman celebrating her 150th birthday?
Well, birthday celebrations aside, there is also a Monday Lecture Series from July 9 – August 27, which is being given by a parade of Who’s Who of historians and biographers taking visitors from the Romanov Dynasty to the Gilded Age to Paris (where Wharton was decorated for her work during World War I) to the Roaring Twenties. The Mount is also hosting an ongoing program entitled Wharton on Wednesdays, from June 20-September 5, in which professional actors will present dramatic readings on The Terrace. There will be a Wharton Salon in August, and tours of The Mount and its magnificent gardens will be open through October 31st.
The Mount is located at 2 Plunkett Street, Lenox, Massachusetts 01240-0974. For more information on tours, events and programs, please visit EdithWharton.org. You can also find The Mount on Facebook and YouTube.
Demetra M. Pappas holds a JD from Fordham, an MSc in Criminal Justice Policy from the London School of Economics and Political Science and a PhD from the LSE Department of Law and the Department of Sociology. Her first book, Historical Guides to Controversial Issues in America: The Euthanasia/Assisted Suicide Debate, (Greenwood Press, forthcoming 2012) is due out in September. She began writing about travel, dining, theater and the arts, historical sights, and spas on her “days off” from her doctoral field work during the trials of Jack “Dr. Death” Kevorkian, and, also writes about sociology, criminology, legal studies, and pedagogical methodology. You can find her on Twitter @DemetraPappas.
Photo credit: Tim Grafft

TOPICS: Berkshires, Entertainment, Things to Do