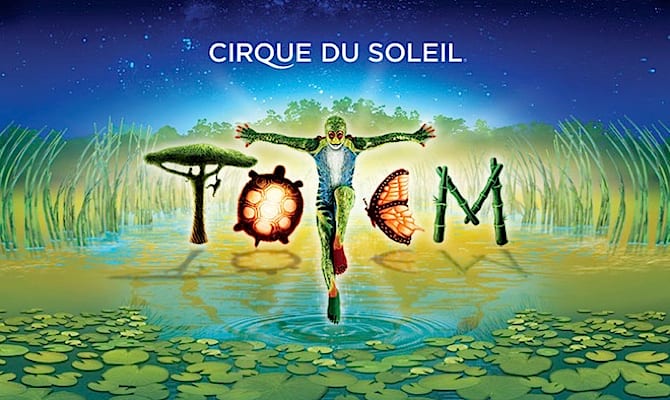 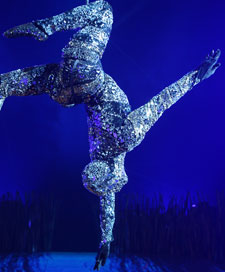 People gasped, wholly astonished. They laughed, shook their heads in disbelief, watched in nervous silence, and applauded wildly throughout the evening.
That’s what Cirque du Soleil Totem does to its audience, as we discovered firsthand after recently attending the opening show. Cirque is in Boston through July, over at the spacious Marine Industrial Park, right along the city’s stunning waterfront in South Boston.
Held under a giant, state-of-the-art Circus Tent and pavilion, Cirque features some of the world’s greatest acrobats, stuntmen, magicians, actors, comedians, mimes and athletes. The troupe is like a United Nations, with artists from Canada and the United States (including Native American Indians), as well as China, Russia, New Zealand, France and other corners of the world.
And so was the audience – diverse in every way, with kids, parents and grandparents, students, tourists, and locals all mingling together. Indeed, one of the great qualities of the show is its universal appeal.
Just to brief you – Cirque du Soleil (Circus of the Sun) was formed in Quebec City in 1984 by a group of artists and dreamers devoted to live theatre and street performance. Since then it has become one of the truly great entertainment and cultural spectacles of our time.
This Cirque show on tour in Boston is called Totem – whose theme traces the journey of the human species from its original amphibian state to its ultimate desire to fly.
The opening stage set was of a gigantic turtle, from which all sorts of visual and acrobatic activity emerged. The feats of daring were breathtaking, much of them done without nets. What we loved, too, was the French-inspired whimsy and impishness that brought the audience right into the show before the curtain even went up.
The eight-piece live band was terrific, blending together indigenous melody with a driving polyrhythm that lent to the drama and flair of the performers.
A true highlight of the show had to be the state-of-the-art technology used to create shifting landscapes and seascapes throughout the show. The set designs, lighting, sound, and staging were remarkable in creating just the right ambiance and mood throughout the performance.
Even more good news – getting into Marine Industrial Park was easy; it is right off Northern Avenue, close to the Boston Convention Center and the World Trade Center.  It overlooks Boston Harbor, and is where cruise ships dock in the summer. A public parking garage is two-minutes from the tent, with local police directing traffic. The Cirque staff is efficient and friendly, from the ticket counter to the merchandise shops, food counter, and wine and beer stations. Even the restrooms were clean, well stocked, and efficiently placed around the facility to avoid long lines.
Would we go back again? Definitely! Cirque du Soleil is one of the most amazing, entertaining, and inspiring shows we’ve seen in a long time. The fact that it’s right in Boston gives visitors all sorts of options for dining, sightseeing or staying overnight in one of the hotels within walking distance.
Vive Le Cirque!
For show times, and ticket information, click here.

Michael Quinlin is founder and director of MassJazz, and publisher of the annual MassJazz Travel Guide. He sends out a daily blog on jazz events taking place in Massachusetts, focusing on both international artists coming to town, as well as great local acts playing in cities and towns across the Bay State. You can find MassJazz on Facebook & Twitter.
Photos courtesy of Cirque du Soleil.

TOPICS: Boston, Entertainment, Things to Do