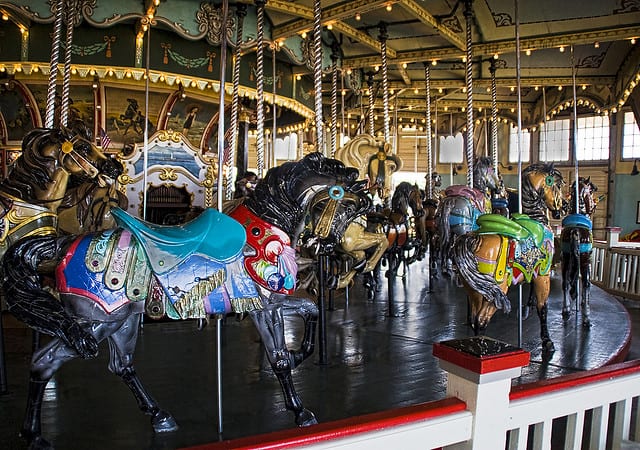 We pass them in arcades and amusement parks without a lot of thought. They have been part of the landscape for as long as we can remember, and as low-tech as they are, they still provide some 21st century fun. Still one of the best rides that money can buy for a family with small children, they are classic carousels.
But did you know that there’s more to that carousel than what you take for granted? Many of the Commonwealth’s carousels are actually rare antiques! We always remember them because they, quite literally, have been here for a long time – delighting generations of families.
For the record, there are a combined eight “antique” wooden and metal carousels in Massachusetts, according to the National Carousel Association.
In order of age:
Flying Horses Carousel (1876) in Oak Bluffs

The Flying Horses Carousel in Oak Bluffs on the Island of Martha’s Vineyard is the oldest platform carousel in the United States. The “platform” qualifier is there only because it shares the honors as the oldest carousel in the U.S. with the Flying Horse Carousel (1876) in Westerly, Rhode Island. This hand-carved wooden carousel was built by the Charles W. Dare Company of New York in 1876, and moved to Oak Bluffs in 1884, where it is now located at the corner of Oak Bluffs Ave, Lake Ave, and Circuit Ave. It is a very popular summer attraction, especially on a cloudy or rainy day. Get the brass ring and you will get another free ride!
Heritage Museums & Gardens Carousel (1908) in Sandwich
There are many reasons to visit Heritage Museums & Gardens in Sandwich on Cape Cod. You can visit their automobile gallery or their wonderful gardens. Or you could visit their American Art & Carousel Gallery which features a fabulous antique hand-carved wooden carousel designed by Charles Looff.
Six Flags New England Carousel (1909) in Agawam
Yes, roller coasters and other rides designed to make your stomach queasy may be the first things that come to mind when you think of Six Flags New England, but their Carousel – the 1909 Illions Carousel is over 100 years old. This, too, is a wooden carousel carved by M. C. Illions who is considered to be one of the greatest carousel artists. It came to Agawam in 1940 in what was then known as Riverside Park.
Fall River Carousel (1920) at Battleship Cove in Fall River
When you go to Battleship Cove you go to see ships – big warships. What you get as a bonus is the Fall River Carousel, an antique wooden carousel from the Philadelphia Toboggan Company. This carousel came to Battleship Cove in 1991 from the old Lincoln Park in North Dartmouth.
Holyoke Merry-Go-Round (1929) at Holyoke Heritage State Park in Holyoke
Back to antique wooden carousels, the Holyoke Merry-Go-Round has made its home in Heritage State Park since 1993. It is operated year-round with reduced hours in the winter.
Paragon Carousel (1928) in Hull

The Paragon Carousel is another antique wooden carousel built by the Philadelphia Toboggan Company. This carousel was an attraction at Paragon Park at Nantasket Beach before the park closed. It was saved from auction in 1996 and Hull has been its home ever since. It is the last existing attraction from Paragon Park.
Cape Cod Carousel & Funhouse Arcade (1957) in Hyannis
For the last carousel on our list, we return back to a classic metal carousel – this one designed by Allan Herschell. This Cape Cod Carousel appropriately makes its home at a funhouse and arcade on Cape Cod.
There you have it, all of the classic antique carousels in the Commonwealth. So the next time you feel the need for some “old fashioned” fun, be sure to check one out. You’ll probably want a cotton candy or a snow cone, too – nothing like a classic treat after riding a classic antique carousel…
Rob Pirozzi is the publisher of the website Travel New England. He lives with his wife and high school age son in Southborough, MA, and summers at his home in Vineyard Haven on Martha’s Vineyard when not traveling around other parts of New England. For more great Massachusetts and New England travel ideas be sure to check out the Travel New England blog.
Photo credits: The pictures of the Flying Horses Carousel are courtesy of Travel New England. The picture of the Paragon Carousel is by Muffet from flickr and is licensed under the Creative Commons Attribution 2.0 generic license.