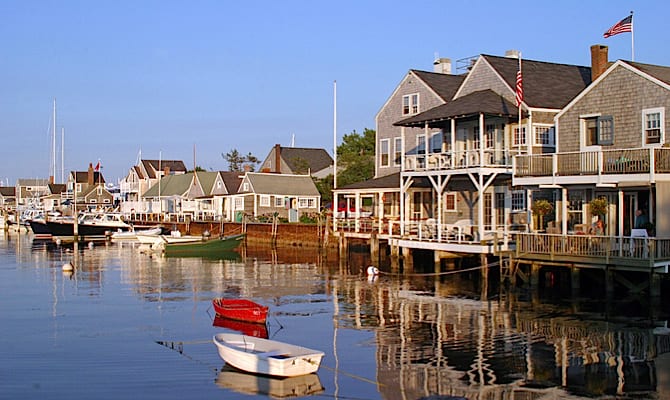 The votes are in and three of the world’s most venerable travel authorities all agree: Nantucket is among the best places in the U.S. and the world. 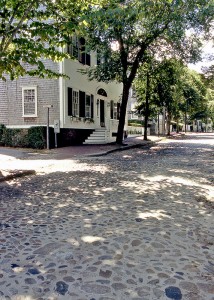 Main Street, Nantucket is one of America’s most prestigious addresses, as well as having one of its most beautiful Main Streets, according to Travel & Leisure. Walking along this enchanting thoroughfare from the Harbor, one easily imagines stepping back into the mid-19th century (it’s easy to ignore motor vehicles which lurch over the uneven cobblestones).
With pristine period houses crowding up to meet the street, a visit to Nantucket is like peering through a time-travel looking glass, so much so that someone transported from a century ago would find much of the ‘old town’ unchanged.
Most of its period houses are covered in untreated weather-beaten shingles, and one often sees first glimpses of Nantucket Town on approach from the water, misted by a swirling fog, thus the moniker ‘the gray lady.’ Of course, whether that nickname is evocative of the frequent fogs or the graying of the houses’ signature cedar shake shingles (or possibly both) is cause for conjecture.
Nantucket is itself a National Historic Landmark with more than 800 pre-Civil War houses and a collection of properties listed on the National Register of Historic Places (qualified as totally preserved buildings).
Main Street is Nantucket’s historic and de facto heart. Here, the drugstore still mixes old-fashioned milkshakes at its nostalgic soda fountain – and its round stools are set before an aging counter. Islanders gather on Main Street and prattle on about island events and news du jour, and then go about their business – seemingly unfazed by the genuine charm and beauty that surrounds them. But scratch an Islander just a little, and their pride will surface, and they’re a kid again, let loose in a land of their favorite toys. 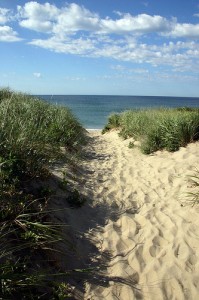 The town radiates beautifully outward from its beloved heart to mid-island, S’conset, Tom Nevers, Surfside, Miacomet, Cisco, Madaket and Dionis, and their miles of stunning, unsullied beaches. The Travel Channel weighed in this year, proclaiming Nantucket Island as the third best beach destination in America.
Many of Nantucket’s magnificent period houses were built by the wealth which whale oil trade endowed this minuscule, 50-square mile island during its heyday as ‘Whaling Capital of the World.’ Its whaling fleet grew from a mere 20 ships in 1806 to 78 in 1821. Those 78 ships carried 27,495 tons of oil across the seas to Europe; whereas fifteen years earlier, just less than 5,000 tons were delivered. American author, Herman Melville, based his enduring novel Moby-Dick on the 1820 ramming of Captain George Pollard’s Nantucket whaling ship Essex (Captain Ahab’s Pequod in the novel) by a ferocious, enigmatic white sperm whale.
Some contend that the cobblestones were taken from these whaling ships, where they were ballasts, which weighted down empty ships’ holds, which had left their cargoes overseas. Others claim the cobblestones came – without all the exaggerated historic baggage – from Gloucester, Massachusetts, north of Boston.
Nantucket’s Main Street was first paved in 1837, and it was paved with cobblestones. Owners of the town’s landmark properties possibly eschewed the impassable, filthy, muddy streets in favor of paving with cobblestones. One leading theory maintains that these landowners paved the street, raising the funds for the project on their own and, therefore, paving it as they saw fit. So they brought the cobblestones from Gloucester and paid to have them laid. For more than 175 years, Main Street has been thus ‘paved’ with cobblestones although there are still disputes about their origins.
In keeping with the brouhaha, controversy and great divide over keeping Main Street’s cobblestones versus paving Main Street over nearly a century ago in 1919, Mr. Harry B. Turner (publisher and editor of island newspaper Inquirer and Mirror, 1907-1948) summarized it in his July 1919 editorial:
“Never fear, Nantucket cannot be robbed of her own peculiar charm. The covering of the cobbles on the business section of Main Street certainly would not do it any more than did the rebuilding of the other streets.”
Paving over Main Street’s cobblestones was one of the first ideological threats to Nantucket’s historical integrity. It was not the last by any means, and box stores, superstores, wind farms, and McMansions have all threatened to rob the island of its historical and cultural underpinnings. And at every juncture, the same spirited debate has left Nantucket blissfully free of many of the trappings of the 21st century. 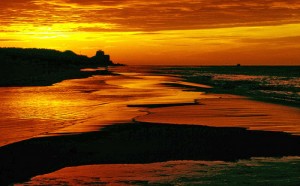 There is bound to be dispute over National Geographic’s acclamation of Nantucket as the “Best Island in the World” in its new book, The Ten Best of Everything. Locals and Islanders were hardly surprised that Nantucket left the Isles of Scilly (UK), Saba (Caribbean), Canary Islands, Fair Isle (Scotland), Lord Howe Island (Australia), Capri (Italy), Channel Islands (USA), Tahiti (French Polynesia) and Islands of the Andaman Sea (Thailand) eating its dust. But everyone knows and trusts National Geographic, right?
What it utters is gospel. So here’s what Nat Geo had to say: “Nantucket was once one of the richest places in America, built on the profits of the whale oil industry. Even today in the delectable old town there are fine brick houses with silver mailboxes. Old-time sailors used to call Nantucket ‘The Little Grey Lady of the Sea.’ On the misty morning I first arrived there, I could understand why. A woman was riding a horse along the beach to the utter delight of her family aboard my ferry, and she bore a banner that said ‘Crazy Aunt Rides Again.’ It is a unique place.”
Best Island in the World (National Geographic’s The 10 Best of Everything 2012 edition)
One of America’s Greatest Main Streets (Travel & Leisure May 2012)
Number Three of the Top Ten US Beaches (The Travel Channel 2012)
Bill is president of DeMa Public Relations based in Hyannis, and specializes in public relations in conjunction with the Cape Cod Chamber of Commerce, Martha’s Vineyard Chamber of Commerce, and the Nantucket Chamber of Commerce. You can also find him on Twitter @wdesousamauk.