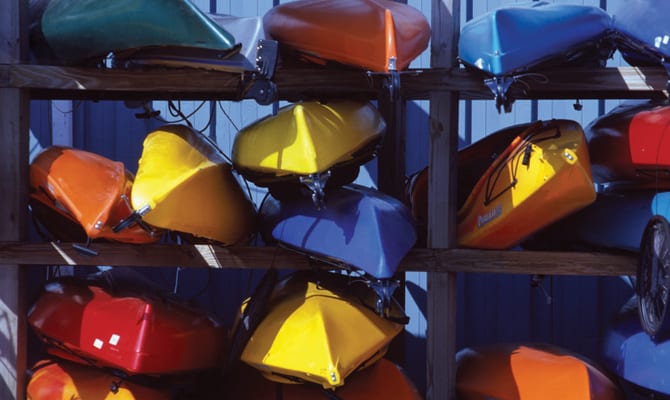 Massachusetts feels like a natural water park to a western transplant like me. With so many waterways, why go by foot to see the historic, natural and urban sights of the Commonwealth when you can go by paddle?
Cape Cod is famous for attracting Kennedys, tourists and artists. But you don’t have to sit through traffic to get a serene ocean view. If you think of Cape Cod as Massachusetts’ arm flexing for the world, then the Bass River runs right up it’s bicep. Paddling down the Bass River, you’ll bypass a lot of summer vacation congestion. Park at West Dennis Beach and paddle north past houses, boats, beaches and undeveloped land in a nature preserve. The town of West Dennis offers kayak rental shops and tours. But be sure to pay attention to the tides if you’re paddling solo.
Nature lovers in search of unsettled ocean views can head north of Boston to Essex County, home of the 20,000 protected acres of salt marsh known as the Great Marsh. Just a few miles from the towns of Newburyport and Ipswich, the Great Marsh ends and meets Plum Island and the Parker River National Wildlife Refuge. The southern end of this barrier island is sometimes closed to pedestrians to protect nesting birds, but you can search for dozens of shorebird species from your kayak on the water. Bring binoculars to try and find the adorable Piping Plover.
A 19-mile loop will take you around the whole of Plum Island, but if you’re not up to facing the Atlantic’s waves, you can still see pristine dunes by paddling on the marsh side in Plum Island Sound. Pay attention to the tide and tidal currents before you head out or you may be pulled out to sea or pushing off marsh mud. Plum Island Kayak in nearby Newburyport offers tours, maps, kayak rentals and suggestions for launch points.
Or, try kayaking down the famous Charles River. There are 78 miles to paddle, according to the Charles River Watershed Association. From its start in Hopkinton, the Charles winds through small towns and leafy suburbs until it hits the Watertown Dam. From there, the Charles widens into a basin through the heart of the Boston urban cityscape. Paddle past Memorial Drive, Harvard, and MIT on your left. Boston University, skyscrapers, brownstones and Beacon Hill will be on your right. Just watch out for sailboats and the occasional motorboat. The Charles River Watershed Association also has maps, restroom, parking, and public landing information.
Don’t forget Massachusetts has mountains and white water too. Head inland on Route 2 from Boston to reach the Deerfield River which offers beginner runs to Class IV or V sections close enough for a single group to paddle both in one trip. Just pay attention to the dam release days scheduled from spring to fall. This part of the Deerfield will bring you up to the edge of the Berkshires, close to the Mohawk Trail and old growth forests. Zoar Outdoor in Charlemont, MA, keeps track of the Deerfield River’s dam release days, rents kayaks and gives guided tours.
Lauren Cox is a Boston-based freelance writer of health and science news. She loves running, climbing, swimming, paddling and other assorted gerunds. You can find her on Twitter at @lrncx.