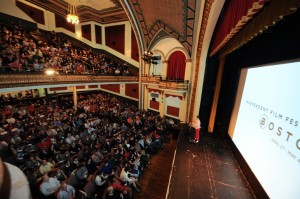 You don’t have to cross the pond or hit the Rockies for the best in world cinema. Massachusetts, with its newly robust film industry, is the place to be when it comes to top-notch film shorts and inspiring documentaries. The Independent Film Festival Boston (IFF Boston) is celebrating its 10th anniversary starting April 25th, and they’re doing so with the best in local and international film and documentary.
This year’s films tackle everything from nuclear power and citizen journalism in China to Juggalos and animated shorts, but we’re focusing on the local flavor – films inspired by Massachusetts, shot in Massachusetts, or written and produced by Massachusetts natives. Here are the films I’m most looking forward to:
Boston Pick: 24 Hours At The South Street Diner
This documentary short, directed and produced by local couple, Melissa and Tom Dowler, tells the story of a Boston dining landmark, and sole 24/7 dining establishment, the South Street Diner. The film captures the story of the Leather District diner, which opened in 1943, by filming for 24 consecutive hours. Along the way we meet the many diner regulars, the late-night bar crowd, diner newbies, and past owners.
Mass Pick: Fairhaven
Fairhaven fills us with a sense of hometown pride. In this fictional film based in the small coastal Massachusetts town of Fairhaven, three friends reunite after 10 years for the funeral of one of their fathers and a boozy weekend ensues. Featuring Chris Messina (Damages), Rich Sommer, and Sarah Paulson, the film takes a look at one friend Jon’s search for the meaning in his life. Fairhaven was also featured at the Tribeca Film Festival and includes music by Dr. Dog and Bon Iver.
Music Lover’s Pick: All Ages: The Boston Hardcore Film
Presented by local record fixture Newbury Comics, this film tells the story of the underground hardcore music scene in Boston during the early 1980’s Reagan era. The film gives an inside look at this straight edge punk community of disaffected kids from the ‘burbs, and includes never before seen footage of hardcore bands SS Decontrol, DYS, Gang Green, Jerry’s Kids, The F.U.’s, and Negative FX.
The Sports Fan Pick: Knuckleball!
It wouldn’t be a MassFind without the appearance of the Red Sox (or a former Red Sox great in this case). The baseball documentary features Tim Wakefield in his final season as a Red Sox starting pitcher, and his mentee, Mets pitcher R.A. Dickey. Wakefield and Dickey give viewers a look at what makes the knuckleball so powerful – its slowness, unpredictability – and ultimately what makes it baffling to hitters and coaches.
Creative’s Pick: From Nothing, Something
From Nothing, Something is an engaging tale of talented personalities, including Sara Quin of Tegan & Sara, whose success has been achieved through their creative drive. Director Tim Cawley speaks with artists from all facets of the creative community, including fashion designers, a stand-up comedian, chefs, cancer researchers, and a Hollywood creature designer. Each tells their story of where their ideas come from and how they keep them coming. This inspiring and often comical look at the creative process was produced locally, with collaborators including Element Productions, Brickyard Filmworks, and Toil Boston.
Can’t decide which film suits your fancy? Let the Festival Genius iPhone App do the planning for you. Download the app here, select any and all the movies that interest you, and pop up some Orville Redenbacher’s while the genius compiles your movie-viewing schedule. It’s that easy. But, you will have to get up off the couch and get to one of the local participating theaters. The app isn’t that genius.
Independent Film Festival Boston, $11 – $15, April 25 – May 2, The Somerville Theatre, Somerville, MA; Brattle Theatre, Cambridge, MA; Coolidge Corner Theatre, Brookline, MA
For more information on tickets and schedules, visit iffboston.org, check them out of Facebook here, and follow them on Twitter @IFFBoston
As pointed out by today’s guest blogger, Massachusetts is home to an array of film festivals – from east to west, The Commonwealth’s local film scene has grown into a hot spot of inspiring, creative, and very well-respected work. For a complete listing of local Massachusetts film festivals, click here.
Do you have a favorite film festival in Massachusetts? If so, tell us in the comments below, or join in on the MassFinds action as a guest blogger, and tell us about your favorite film festival with a few kind words!