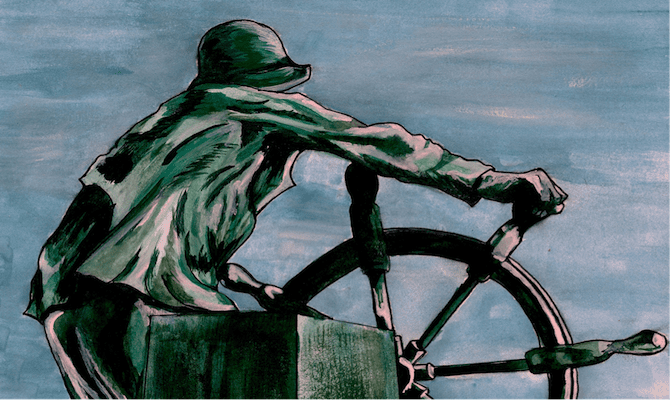 Most visitors to the State House located in Boston’s Beacon Hill will no doubt take sometime exploring the Hall of Flags or peering at the intricate details of the State House model, which stands in the entryway outside Doric Hall. There is one important decorative element in the building that should not be missed, as it is an important symbol of Massachusetts’ powerful relationship with the sea. It is, of course, the Sacred Cod.
Looking up inside the House of Representatives chamber, visitors will see this rather curious codfish, which is carved out of pine. This modest reminder of the state’s robust fishing industry was carved in 1784. Interestingly enough, it has left the building under unusual circumstances twice. A group of young pranksters from Harvard University borrowed the cod as a practical joke in 1933, and it was subsequently borrowed by students at the University of Massachusetts Boston in 1968. It’s here to stay now, and it is a nice way to start your exploration into the world of Massachusetts maritime history, lore, and traditions.
Build-A-Boat
Located in Amesbury, MA, Lowell’s Boat Shop is housed in an unassuming wood frame building on the North banks of the Merrimack River. It is truly part of Massachusetts maritime royalty, if you will, as it is the oldest continually operating boat shop in the entire United States. The shop first opened in 1793, and its founder, Simeon Lowell, is considered the designer of the American dory, which remains a popular fishing boat today. Today, visitors can stop by the shop and learn about boat-building via demonstrations, and those with the time and inclination can sign up for one of the boat-building courses offered here. Additionally, people who want to get out on the water should look into one of their popular rowing excursions.
Down to the Sea In Ships
As you stroll down Stacy Esplanade in downtown Gloucester, you will encounter a most powerful looking statue looking out over Gloucester Harbor. It is the visage of the Gloucester Fisherman, a memorial installed in 1923 to commemorate those hardy souls who gave their lives in the service of their industry. There have been many thousands of Gloucester fishermen who have lost their lives at sea in the past three centuries, and in 1879 alone, 249 fishermen expired far from home. Cast by the English sculptor Leonard F. Craske, visitors will find that spending time here around sunrise or sunset is particularly moving. Also, a stop at the nearby Cape Ann Brewing Company for a pint and some food on their outside deck is a nice way to round out any visit to Gloucester.
From A Cape Ann (Light) Station
The many lighthouses that dot the Massachusetts landscape are key parts of the state’s history and serve a very practical function (no one wants to run aground, after all). A few miles away from downtown Gloucester, the Eastern Point Light is a fine example of these useful and beautiful navigational aids. The station was constructed in 1832, and painter Winslow Homer spent a productive year in 1880 documenting the maritime landscape in his signature style. While visitors today can’t explore the actual station, they can get great photos and views of the structure from a nearby parking lot and breakwater. It’s also worth taking a trip to the Cape Ann Museum back in downtown Gloucester to see the station’s original Fresnel lens.
The Whaling Past of New Bedford, Mass.
Many things made New Bedford a bustling place in the 19th century, but chief among them was its role as one of the primary hubs for the American whaling industry. Today, the New Bedford Whaling National Historic Park offers a rich cornucopia of exhibits and activities related to the town’s maritime past. Visitors can get started by visiting the park’s visitor center, and there are exhibits that tell the story of the whaling industry and a clutch of wonderful self-guided walking tours around the downtown area. One institution dedicated to whaling history and related matters is never enough, and visitors should also plan on stopping by the nearby New Bedford Whaling Museum, which includes exhibits of maritime paintings and other historical ephemera related to the enterprise of whaling. They also sponsor an annual weekend celebration of scrimshaw (the delicate art of carving on the bones of marine mammals) and several speaker series, such as their lively “Man and Whales” talks.
Max Grinnell is a writer based in Cambridge, MA, who writes about cities, public art, geography, travel, and anything else that strikes his fancy. He’s the author of several books, and his next book, “Secret Chicago,” will be published in fall 2012. His writings can be found online at www.theurbanologist.com and he tweets over @theurbanologist
Imagery is credited to Regina Jay, a Boston-based artist who can be contacted at [email protected], and you can also follow her Pinterest activities here. 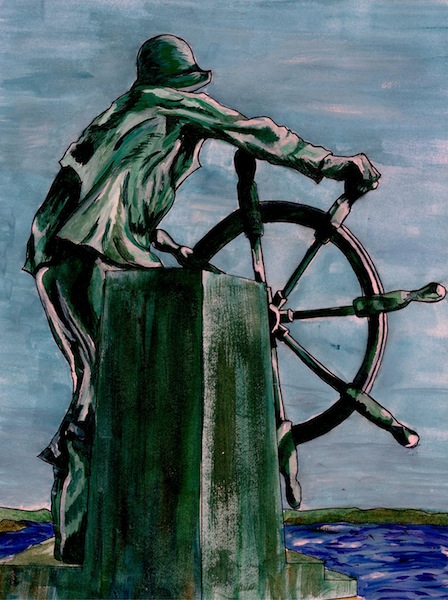 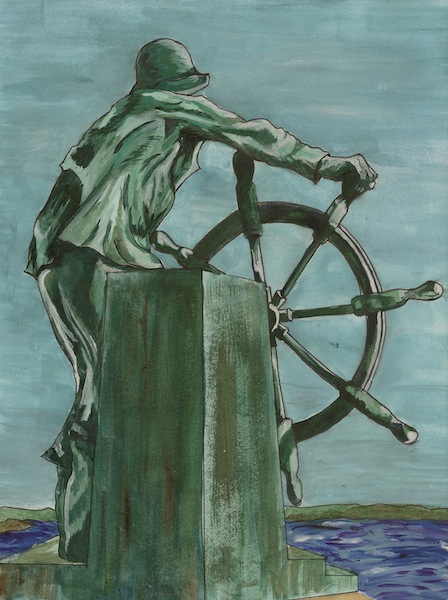