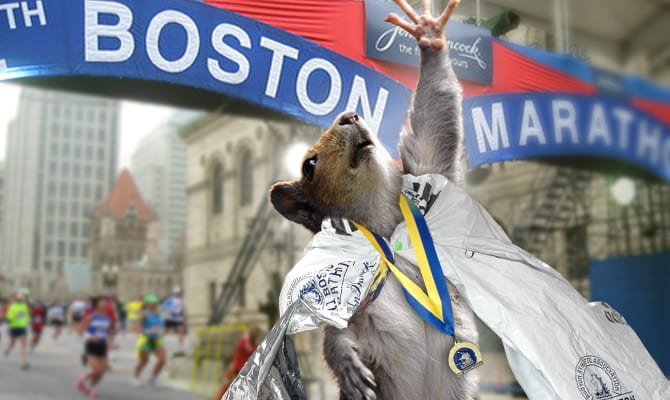 With a distance of 26 miles and 385 yards, from beginning to end, runners on Monday, April 16th, 2012 will, on average, take approximately 55,374 strides to reach the finish line. Talk about a serious measure of athleticism and determination; participants of the Boston Marathon have continued to wow and inspire Massachusetts residents, friends, travelers, and tourists annually for 115 years.
This year, the 116th Boston Marathon – the world’s oldest annual marathon, and certainly one of the world’s most prestigious road racing events – will gather over 26,000 official participants. And, as New England’s most widely watched sporting event, here at MassFinds, we’re proud to announce the 116th Boston Marathon as our Find of the Month for April 2012.
As an absolute charitable and cultural phenomenon, the Boston Marathon has raised more than $122 million that has served areas of need throughout Greater Boston, and the event itself attracts more than 500,000 spectators from around the world each year.
Originally held on Patriot’s Day, April 19th, 1897, the Boston Marathon continued its tradition on April 19th up until 1969, when Patriot’s Day was officially moved to the third Monday in April – since then, the race has been held annually on that Monday.
So, thinking along the lines of over 500,000 spectators that stretch from the start of the race in Hopkinton, MA and runs through seven other towns and cities – Ashland, Framingham, Natick, Wellesley, Newton, Brighton, and Brookline – before finishing at Boston’s Copley Square, what’s a notable point in the races 26.2 mile stretch?
Heartbreak Hill, as in the notorious uphill climb near Boston College’s campus that kicks off the final six miles of the race. Here you will find the statue of the famous John Kelley, a defending champion that inspired the nickname “Heartbreak Hill” in the 1936 Boston Marathon, where Kelly had caught up to the current race leader, Ellison “Tarzan” Brown, giving him a pat on the shoulder as he passed by, only to end up falling back to second place as Brown found a competitive drive to rally ahead for the win, figuratively, breaking Kelley’s heart.
So, if you’re in Massachusetts on April 16th, stop by the Boston Marathon, cheer on the amazing athletes, dedicated charitable fundraisers, and celebrate the existence of this amazing event that is ever so impactful on our wonderful state.
For a glance at the marathon’s official course map, please click here.