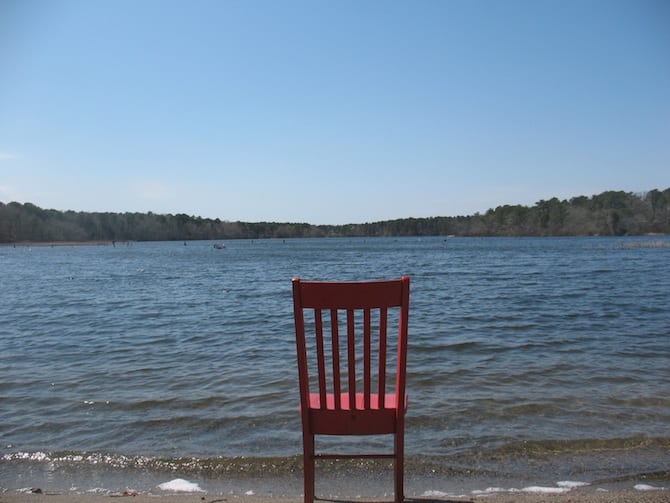 May has arrived, fruit blossoms are in full bloom, ospreys and sandpipers are returning from their winter vacations, and Massachusetts is basking in, unseasonable but glorious, sunny, spring weather.
When the sun shines, thoughts drift inevitably to days lazing on the beach, and for many that means heading for scenic Cape Cod. More guides have been written on “what to do” and “where to go” on Cape Cod than you can shake the proverbial stick at, but a new voice has been added to the pantheon of great travelers, and one that brings a whole new perspective to traveling on Cape Cod.
A red chair belonging to Beth Colt, owner of the Woods Hole Inn, has ignited the imagination of the local area and has become quite the traveling dignitary. How so?
A photograph taken by Beth, of the red chair alone and gazing back at her from a frozen pond, portrayed such incredible serenity and wonderful contrasts of color and imagery, that it inspired one of her guests to make a request; she asked to borrow the chair for a day, so as to photograph it in out of the ordinary and contextually different positions throughout the local area. 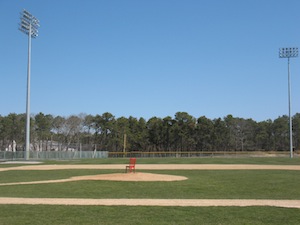 When the guest posted her photographs, it created such an immediate buzz and level of response that Beth came up with a cunning plan. She galvanized support from her black book of local innkeepers, and sent the reticent red chair on a journey to explore the length and breadth of Cape Cod whilst its hosts, the blessed innkeepers, would create a photographic and written journal of some of the wonderful places to which they had treated the red chair, and thereby create a visual diary of places on Cape Cod.
The innkeepers were encouraged to write and photograph based on what the red chair inspired in them; be that – an artistic response, emotions that the chair represented to them or that were triggered in the budding auteurs or simply a way to see differently the particular Cape Cod environ in which they lived.
Oh, truly what fun the red chair has had! The full journey, the thought-provoking photographs and an insight into the places the locals visit on Cape Cod is shared on the red chair’s very own website (www.redchairtravels.com), and it is planned that the chair will end its Cape Cod adventure by appearing as an honored guest at the Professional Association of Innkeepers (PAII) New England conference on May 1st in Hyannis.
In summary, since departing Woods Hole, the red chair has visited historic Sandwich and, among other adventures, checked out Sandy Neck Beach, moved on to the Lamb & Lion Inn in Barnstable, who treated their visitor to a tasting tour of the Cape Cod Brewery (no ID’s required for quadrupeds apparently).
It was then up historic Route 6A to picturesque Brewster, and then across to the elbow of Cape Cod at Chatham, where a visit to Chatham Pier Fish Market was arranged courtesy of the Captain’s House Inn. 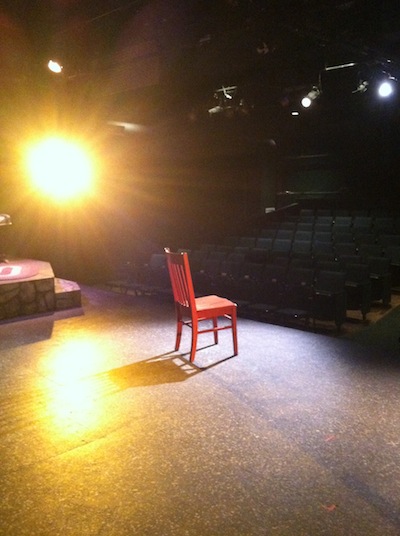 The red chair then stopped at The Platinum Pebble in Harwich, where it took an opportunity to turn the tables (pardon the pun) and rather than being the object of the musings, it put pen to paper and shared its perspective on the trip.
An interesting personality revealed itself and it’s clear the originally reticent red chair has taken well to the role of traveling correspondent (and would-be actor given his audition at the Harwich Junior Theatre!).
Onward then to the art studios of Truro and then to see the Pilgrim’s first landing point in Provincetown.
Now, the red chair has entered the return leg of its Cape Cod journey and after stopping for some fly-fishing at The Orleans Inn it’s heading off to Falmouth and then home to Beth.
What next? Maybe plans are in the works for a grander tour of New England? Keep checking the website!
In the meantime come to Cape Cod and follow in the four footsteps of the red chair and enjoy this stunning part of Massachusetts!
Simon Hunton owns The Platinum Pebble Boutique Inn on Cape Cod with his wife Annabelle. Originally from England but now happily “washed-ashore” on Cape Cod. An avid Liverpool Football club supporter, and golfer. You can check out The Platinum Pebble Boutique Inn on Twitter @platinumpebble.